When I tried to link two computer together it stop loading i have tried to uninstall and re install but it still in not loading all i get is the loading Samba screen.

Hello. I’ve fixed that problem but not released that. Please press alt+tab to bring error dialog to foreground and post a screenshot of it here. Thanks in advance. 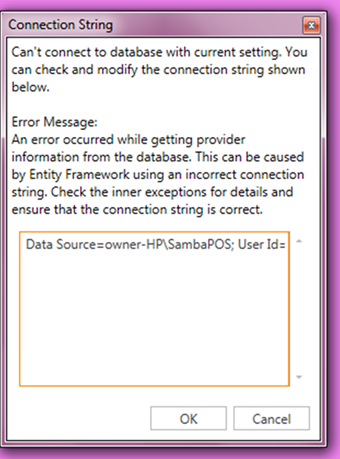 What was your connection string? You can type it here to correct the problem.

I have look at the string but it looks okay to me as this worked in v3 but cold ou look at it to check.
Data source=owner-hp\SAMBAPOS3; User Id=sa; Password=38Cherry

Correct me if I’m wrong but it looks like it cut from User Id= part. Can you try pasting your full connection string here and click OK?

That is the correct string the user name is “SA”

I mean when the error dialog shown, correct the connection string by pasting it inside editor and click ok.

it is the same as this mention above 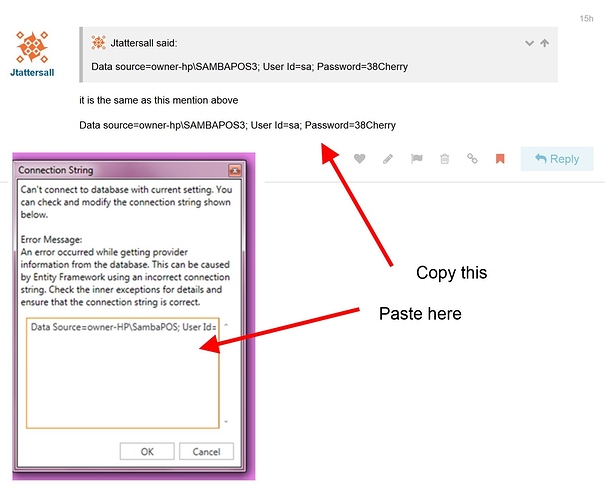 So the computer’s name, where your SQL SERVER is installed, is “T1”.
On “T1” computer, do you manage to launch SAMBAPOSV4 and be “connected” ?
If yes, do you manage to connect with this string :
"Data Source=T1\SAMBAPOS3; User Id=sa; Password=38Cherry; Database=SAMBAPOS3; "
May be on your network, “T1” is not the right name.
If try with "data source=localhost\SAMBAPOS3; User Id=sa; Password=38Cherry; Database= SAMBAPOS3;

In my case for exemple, My computer’s name is AAAAAAA (when I log me on Windows) but on my network it’s ASUS123456 because there is a difference between User account and computer’s name.
May be you already know that but It’s kind of mistake I’ve already made.

Two stupid question : Which version is it on your “client” computer (v3 or v4) and is your network ok? For exemple do you manage to share a folder between the two computer?
I’ve already had this error. My client pc was out of local network (i mean i wasn’t able to acces to a share folder on the server pc from the client pc)

Vision 4 on both pc on samba pos. I can share document between bothcomputers

Ok,what happened if you reinstall V3 on client PC instead of V4
Or maybe is still installed.
You said that worked on V3 before you upgraded to V4 so try to launch V3 on your Client PC with connection string (with OR without “database=POSV4”)
If it doesn’t work, sorry but I give up because I reached a lot of problem (about connection string and network settings) but not like yours.