Setting up a Kitchen display only for prepaid order

I am configuring SambaPOS for pizzeria. Their flow is as below.

In this scenario i will have only three order states New Paid Order [Which will be displayed in kitchen], Order Ready, Delivered.

I have been trying this for some time but some how i am not able to implement it. 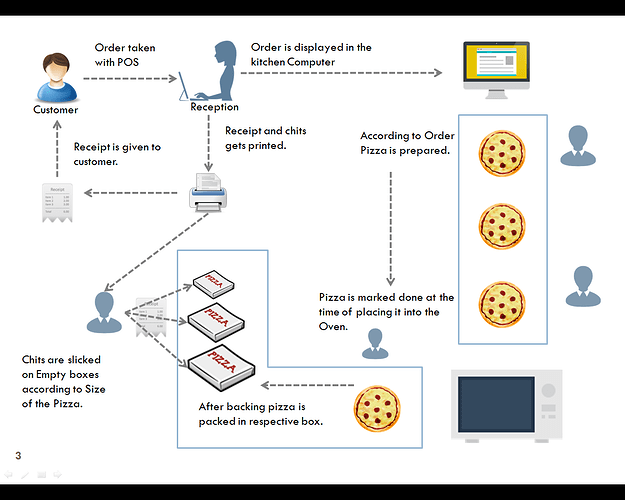 Where are you intending to update the orders from ready to delivered?
A boxing area screen?

Most of this can be done with version 4, However there are some enhancements in v5 that you may find are VERY important for a pizza business like this. The biggest enhancement will be the labels printed for the pizza boxes. V5 has the ability to individually print Orders and number them like 1 of 3, 2 of 3, 3 of 3 etc. Its called ORDER INDEX and INDEX TOTAL tags which are v5 only. Additionally v5 supports Order Level Kitchen Screens while v4 only supports full tickets.

To get you started though you should read the printing tutorials to learn how to setup your tickets and label prints.

Here is a great tutorial that shows the power of v5 for very nice kitchen screens:

Here is the basic v4 kitchen screen tutorial you will notice its very limited compared to v5:

In this tutorial I’ll show you how to prepare a Kitchen & Bar display to notify staff for new orders. We’ll start by creating action to update orders’ display state. [image] We want to update beverage orders display state as Bar. We’ll create Order Added to Ticket rule to handle this. [image] Hint: Create a default mapping for all rules that we’ll create on this tutorial. For simplicity I’ll skip that step for remaining rules. [image] So when we add an order to ticket it’s display…

Yes i will have one more terminal which will make the order status delivered.

As kendash sadi v5 does offer several nicefeature which would be ideas for yousuch as order index.

You say you have been trying for some time… where have you got to? where are you having dificulties.

I have set up my kitchen screen as well as waiter screen for delivering the order.

Issue I am facing is how to reflect order status on entity i.e. i have setup Token (just like table) screen. ?

What do you mean by token? Entity?
If you want to format the entity grid you would want to create a new state flow, something like TokenStatus with values of Ordered, Ready and Delivered.
You then add update entity state actions into your workflow.
V4 has some basic entity grid state formatting the state for which you choose on the entity grid ‘display state’.
V5 has some big improvements for entity grid formatting beyond just colour like adding entity balance or custom info.