[SOLVED] There is a way for don't print only this time an order? Like a button "Don't print"?

Sometimes I need to don’t print certain orders, but only store in memory until Settle.

You can control when and how everything is printed through rules and actions. look through your rules and find Print Bill action. Study it and then you can pretty much tell it to print or not to print whenever you want.

Its hard for us to just give you a solution. Everyone has different needs.

It sounds like yours is set to print on ticket close. You could change it to payment processed. Or if you want both you would need to use an Ask Question Action. If you are interested in Ask Question Action there are great tutorials under Tutorials category of this forum.

Can I don’t print on ticket close ONLY if a button “DON’T PRINT” is clicked?

Hot to do this?

It’s such a mess with Rules.

(It would take a collection of questions like this because sometimes the search does not give the desired results.)

I think by default Print Order is executed on Ticket Closing, so you will need to remove that Action from the Ticket Closing Rule, and implement your own solution. It’s a fairly simple setup, something like the following, which is for Print Bill, but could be easily modified for Print Order instead:

Using Ask Question Action to decide if a Bill is Printed.

Rules and Actions can be intimidating at first. But with practice it is really not hard. You will never find the exact implementation that you want on the forums. What you will find is ideas and methods you can use to build exactly what you want.

I already know this.

My problem is that I need this solution: like default Samba for me is good. It print the order when i click “Close”. And it’s good. But sometimes I need to DON’T print the order. And so I think is it better a button on the left who is “DON’T PRINT!!!” so when it is clicked before click to “Close” the print doesn’t start.

Now, (@Jesse) I know that I have to study myself the program: BUT I DID!!! All night long! It’s difficult for me to understand how to accomplish this solution!

CAN YOU HELP ME?

Samba was designed for you to customize it. By nature you “should” learn it and customize it for your own business.

You cannot make a Don’t Print button and insert it in default Samba. Samba is not designed that way on purpose.

Technically there is not a “Default Samba” it is just a configuration setup to get you started and it works out of box.

You cannot just make a button to “Stop Print” and insert it into default Samba. You would have to create an entire rule/action system around it and redo the entire printing method which would NOT be default Samba.

I can list several methods for printing bills/receipts. But what you are describing is not possible in the nature that you want it done. I really cannot help you unless you try to understand how it works. Then you can choose what method you want to use for printing and we can help assist with the setup.

so you are saying to me that today IS NOT POSSIBLE insert a button for skip live the print of orders in the default configuration of Samba.

Ok. I understand your thinking.

THE QUESTION IS: Can you help me with this?

@QMcKay showed you a method that would accomplish what you want.

No I am not saying that… it is possible but you would have to redo the entire Printing setup.

We will never truly be able to help you until you understand how Samba works and what it is. It is crucial that you read the tutorials and get a basic understanding of what Samba is for your business.

But with that method every time I have to confirm the print!

I know that My questions are difficult, but they could also be considered for future features of Samba. In the end these problems are common to many people.

EVERYTHING you have been asking can be accomplished with Samba right now it does not need any future upgrades for it. That is what I am trying to tell you. Samba is not a program that you install and wait for developers to add features for you like traditional POS software is.

Samba is designed so that YOU configure it how you need. There are many many tutorials and tools to help you along that way.

You will have a miserable experience with Samba until you can understand that it is not just a Free POS software. @emre is not going to develop specific features for us whenever we ask. He will develop methods and tools for us to accomplish it… and we can get guidance from him on how to use the tools.

Find the Rule that has the Print Order action in it and let me know the name of that Rule. I removed the print job from that rule a long time ago, so I don’t know which Rule it is in. I need to know where it is to help you.

Instead I have a button that I touch specifically to print the Order - it never prints otherwise.

I am thinking he will need a state stored on the ticket that enables print on close… and a button that changes that state… preventing the print. 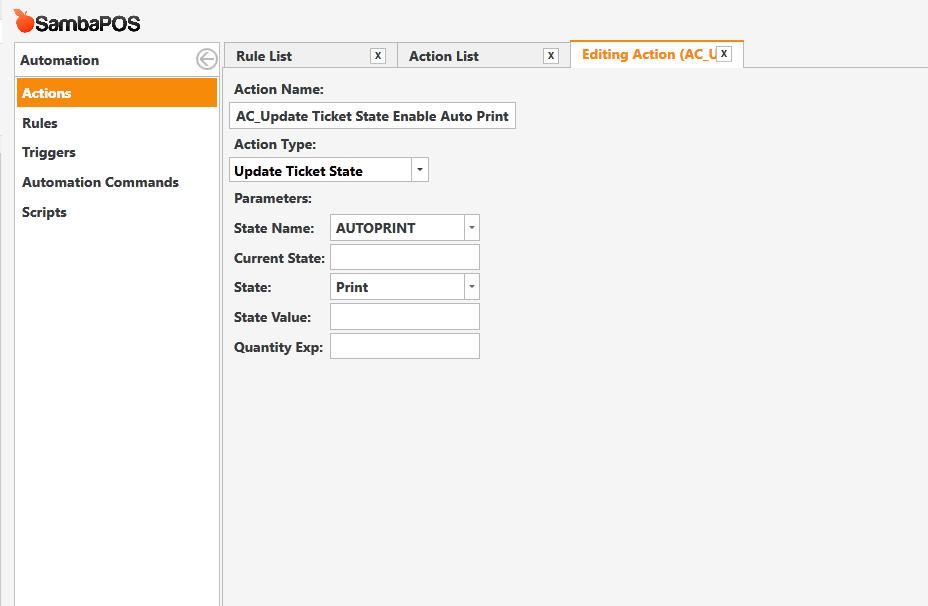 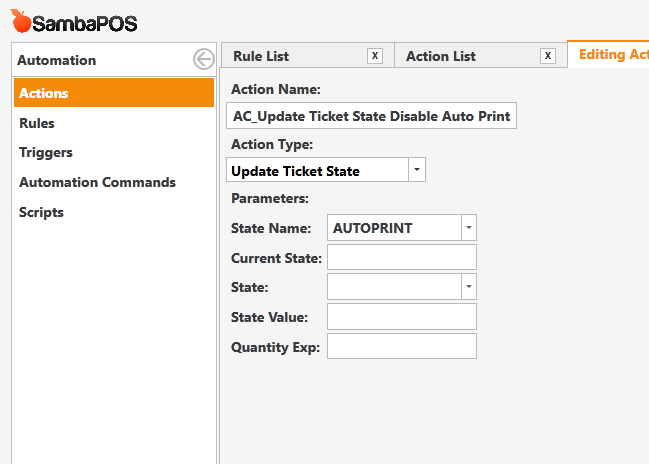 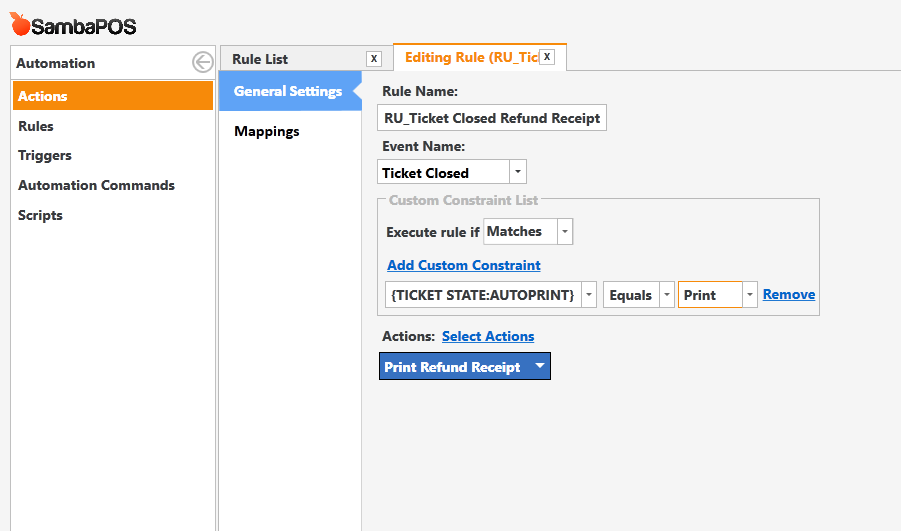 Make a Ticket Opened rule insert the Disable Auto Print action you made: 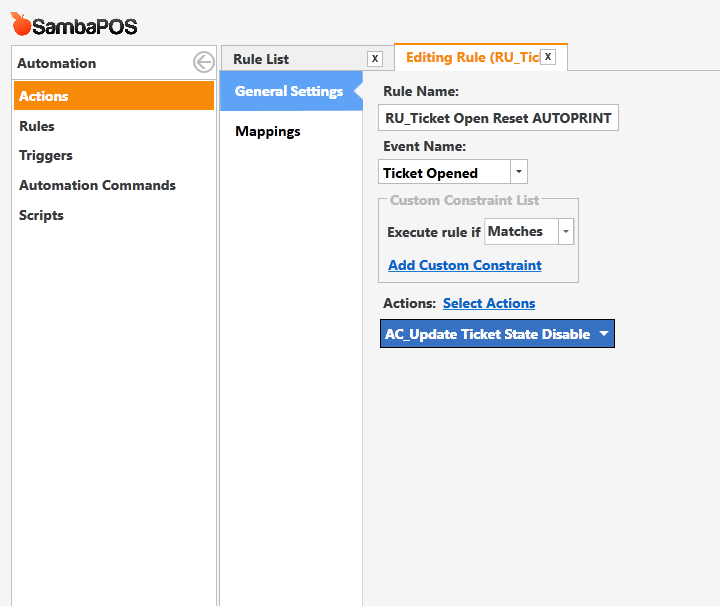 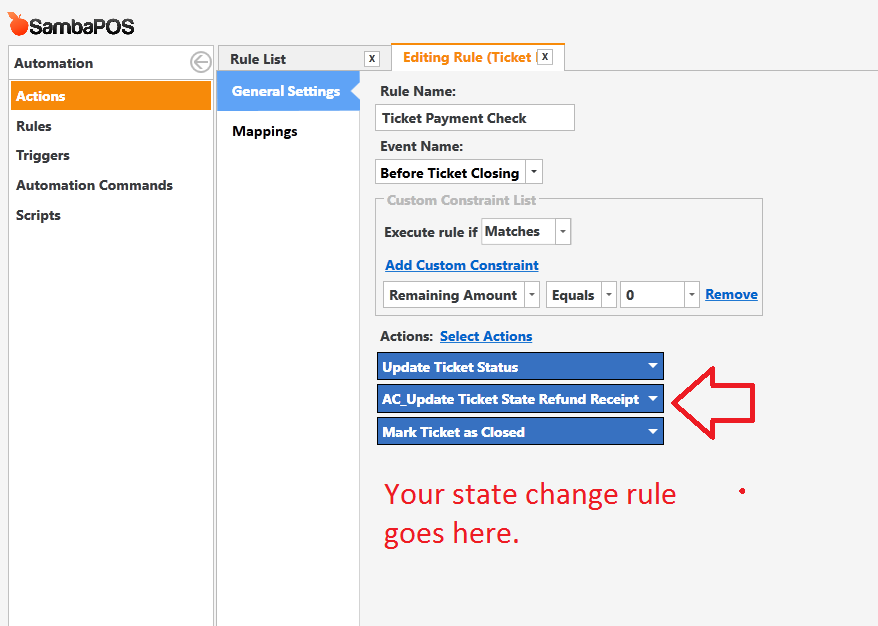 Make a rule to handle the command button: 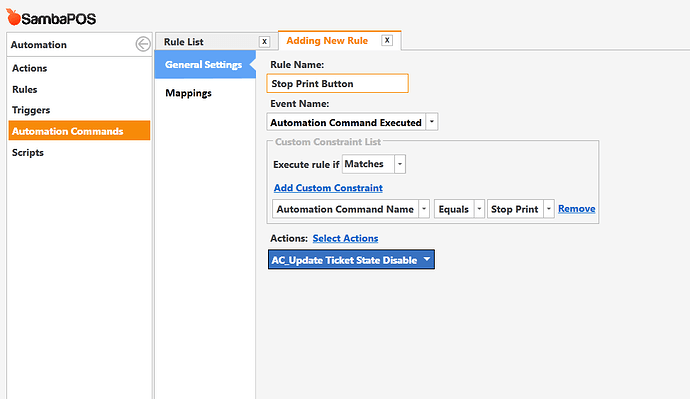 Dear @QMcKay, here are my settings: 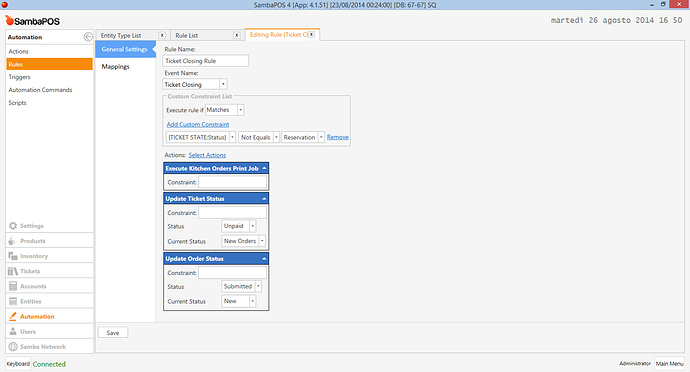 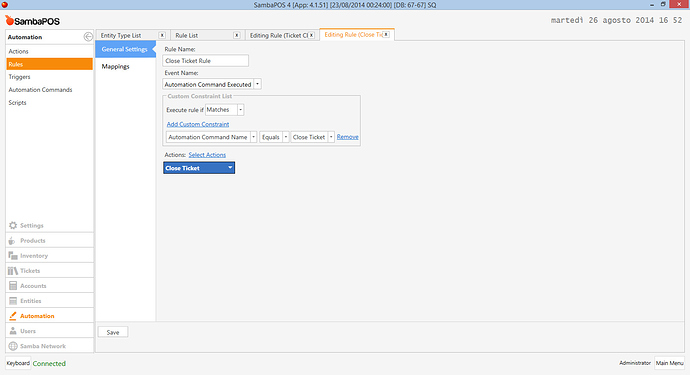 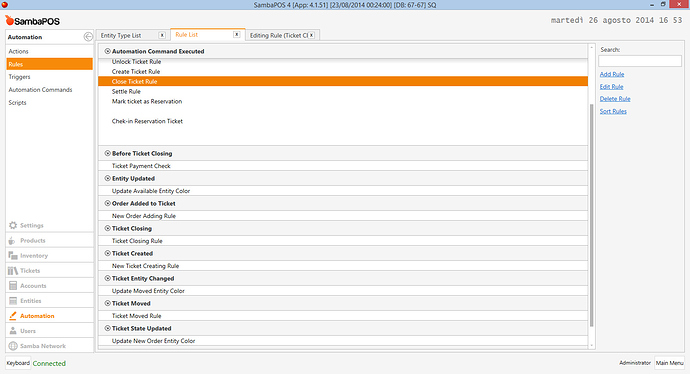 I just posted a method that will do Exactly what you want… but you need to take out the current rule that has your Print Bill action.

EDIT: What you posted above is your Kitchen Printer print job. Are you wanting to just prevent something from printing in the kitchen? That is entirely different than what you described.

Yes. My problem is with the kitchen printing.

Can you give little more information… Why do you not want it to print in kitchen?

Beacause sometimes I SPEAK by voice with my waiters and my kitchen telling them whta they have to do, but I in the same time need to save orders WITHOUT print in the kitchen. Is it clear now?

Not really. So you are saying you do not want it to print in the kitchen because sometimes you tell them by voice what to make? and you do not want them to make it again?

You should really give us an idea of what kind of operation you are running. We need to know what you are trying to do and why so we can give you some guidance on how to set it up.

Start with your business. What type of business is it. What do you sell, how do you use the POS.

and you do not want them to make it again?

WHAT ARE YOU SAYING? WHAT YOU MEAN?

I give you an idea from this morning, from yestarday! If you read the first post and then you’ll understand.