What Does Show in Ticket option state for? I have been playing but have seen no difference… 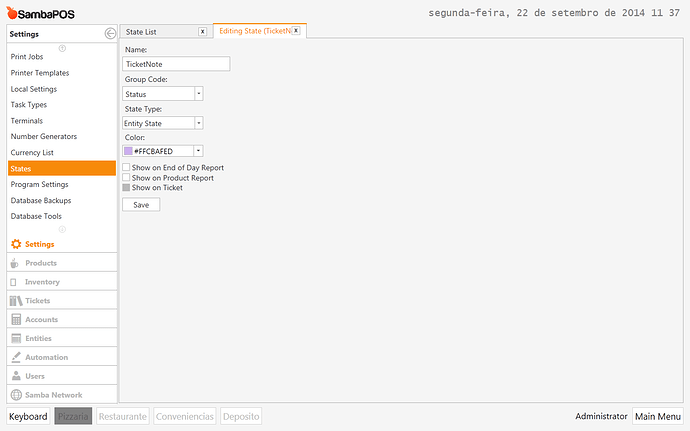 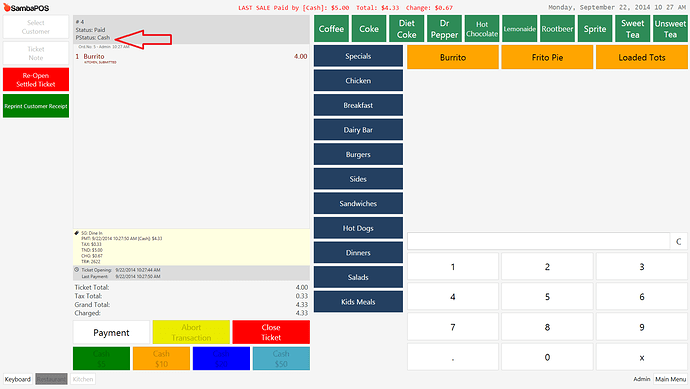 It shows up at top of ticket like I just showed you. You need to be sure your using it correctly. Specifically the Group. Here is a simple situation where I explained a propper use of a Order State

Here is why it will not work. You did not actually define a State or a State flow for it. Give me a few minutes I will show you how to make it work and hopefully demonstrate States and State Grouping more accurately.

Dear Kendash, i think I did all correct, I just defined one new state for ticket notes… but either I check that option or not, it shows the state in the ticket!!! let me try again…

BTW I noticed you made your own State but you used the Same Group code that other states are using… you may want to avoid this… as that ties it in with the other States. Instead give it its own Group Code like TNStatus for Ticket note status… etc

Any state that uses that same group code will share it… and you can call that group code up in rules. There might be times you do not want to give a unique code and you do want it to share the same group code… it all depends on your flow.

Exactly, I wanted just one more status for entites (tables in this case) so when there is a note is shows a different color…

ALL WORKS GREAT!!! the only question is if that option does anything… I notced that even unchecked it appears on the ticket… let me try again… maybe i did not test properly that!!!

Remember your using Status… so other things change color of status… not just ticket note… If you make your own Group Code like TNStatus then assign colors… then ONLY things using TNStatus will update.

Yes it will appear on ticket if you have that selected. Its not waiting for a state before it appears… The way you control this is the point when you apply that State to the ticket. So Ticket Created rule, Ticket Open rule, Payment processed rule etc

either its selected or not, it appears anyway… i tested again…

That is because your using Group Code Status… Status is in your Ticket Created rules… look at it. Look at Ticket Created / New Ticket Creating Rule. Every ticket that is created assigns Status to the ticket because of that rule. And Status is shared among Entity and Ticket states… look at your states… several of them use Status Group code.

so it inherits GROUP CODE´s Show in Ticket option? if so, its fine for me, as I intended to be shown… just wondering why it showed even tho I did not checked that option…

We are talking about same thing you just dont understand it yet. It can be confusing because of how its listed in the actions. The actions/rules will show the group code as the State… 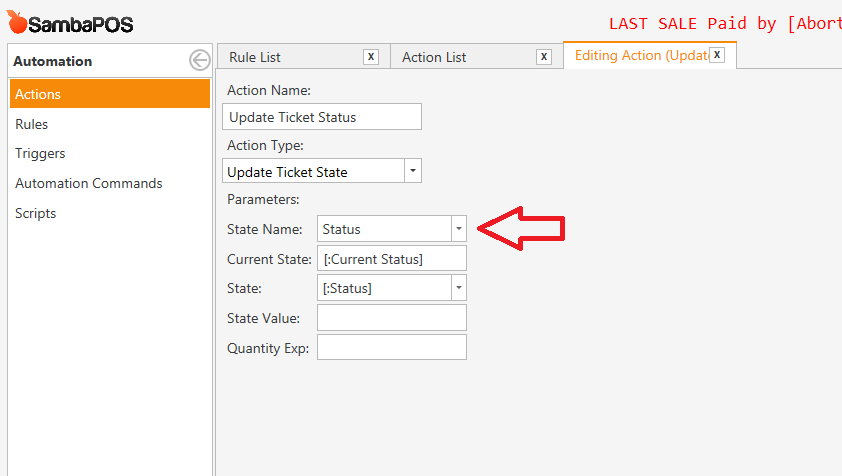 you just dont understand it yet

That has been a constant in my live… LOL 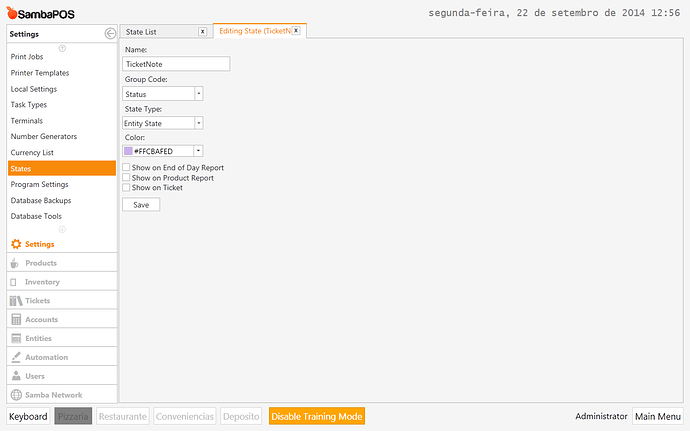 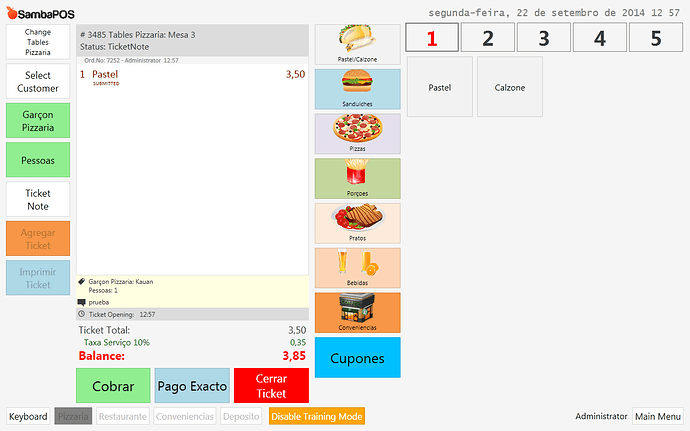 Now look at this action being used again… this is in ticket closing rule… Same action. 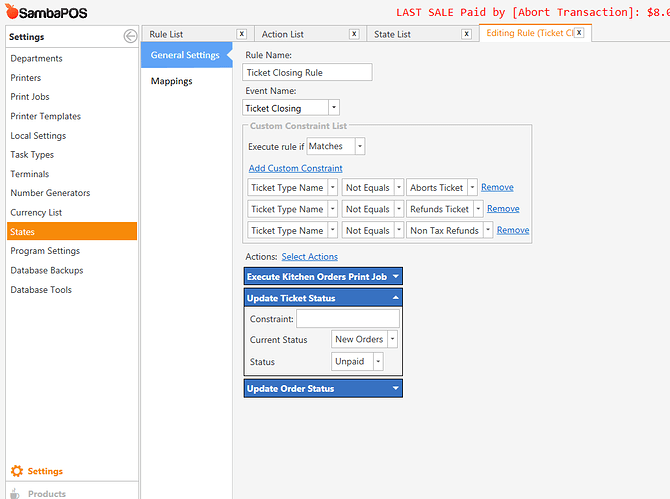 Now look at New Orders State… its an entity state and show in ticket is NOT selected… Yew it has Status as Group Code.

Its because your using the SAME group code as the State that also uses Status group code that is assigned at ticket created rule.

All states are always visible to admin users.

Bah ok I thought I was on to something… that makes more sense thank you. However If Admin or not… I am able to control when something shows on ticket by using Group Code effectively… So was I almost right? It seemed like it was working with behavior like I was describing. I am able to control my Payment Status State to show only after Payment processed. Even if I am in Admin. 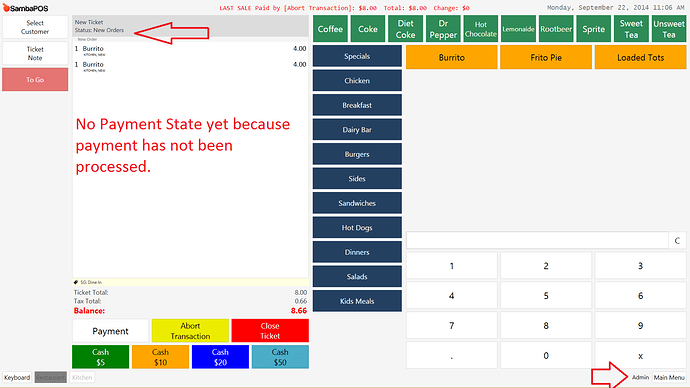 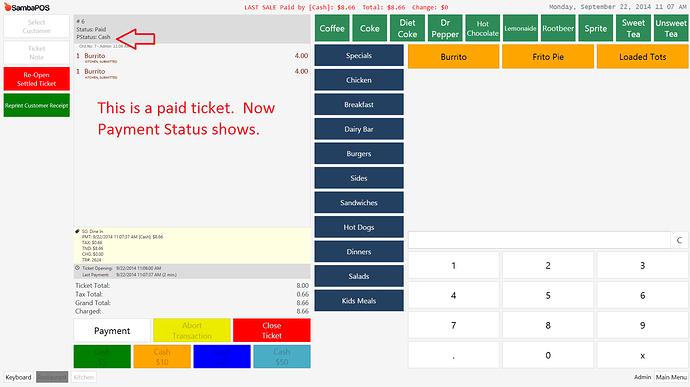 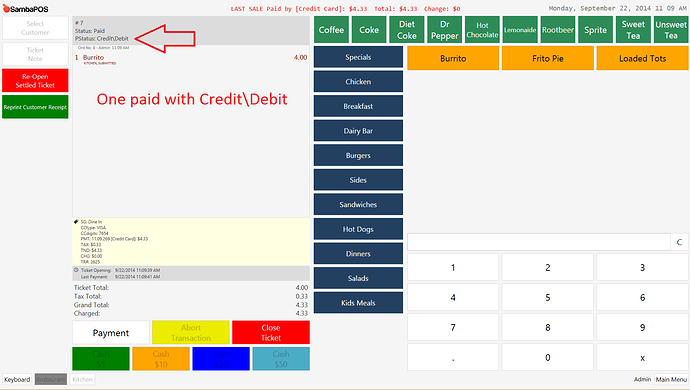 It displays if it has a value so as you’ve didn’t set a value for PStatus before payment it won’t display.

Edit: I’ve allowed to hide state values from users as they don’t really need to see state values that we use to control flow. For example we don’t need to show (new, void, gift) values to users so we can hide them.

That makes sense thank you. I am glad you explained that… I can fine tune my system with that knowledge thank you.