@Emre, I think that at this point SAMBA v4 is better than open source, why?, as an old programmer, I really am not in the mood of starting to learn c# or any other language, but as you can see, I am really eager to learn how to use constraints or rules or actions… I know these are two different things, but, consider this… maybe in a near future SAMBA grows enough to have some kind of scripting language. Holly grail of SOFTWARE. Imagine combining existing features like rules, actions, triggers with some sort of scripting…

Has anyone setup waiters as Entities yet? Trying to wrap my head around this. What will it do to their printout at the end of their shift? In my restaurant every waiter is responsible for their own cash out. If I do this does that mean they have to log in as their user and again as their entity every time they start a new table? Is there any tutorials on how to accomplish this? Can I use custom reports to create a new sales report for this??

The User can be associated with the Waiter Entity automatically upon login using Automation, so there is no need for entering a PIN twice.

Create an Action of the Type Load Entity.
Create a Rule for the Event called User Login, and within that Rule, fire the Load Entity Action using [:UserName] as a parameter to the Action. 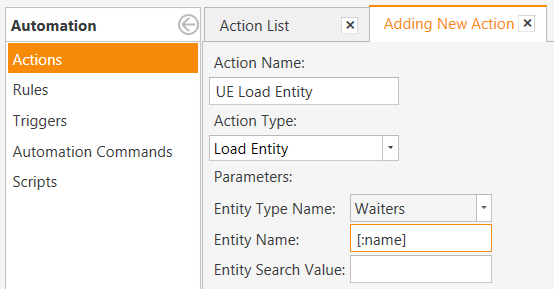 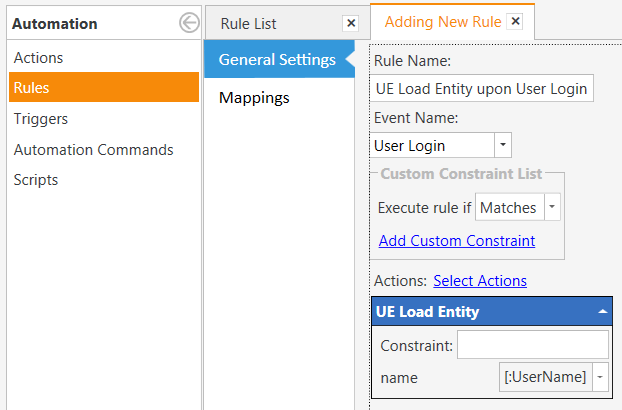 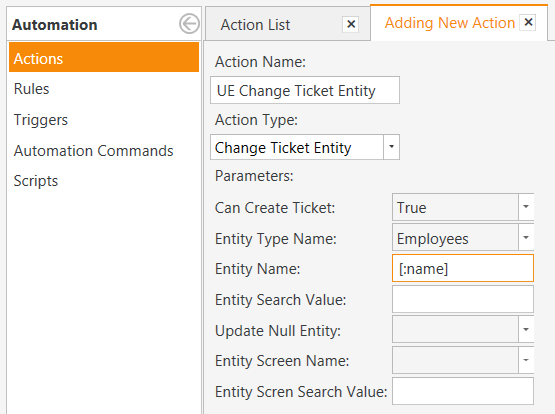 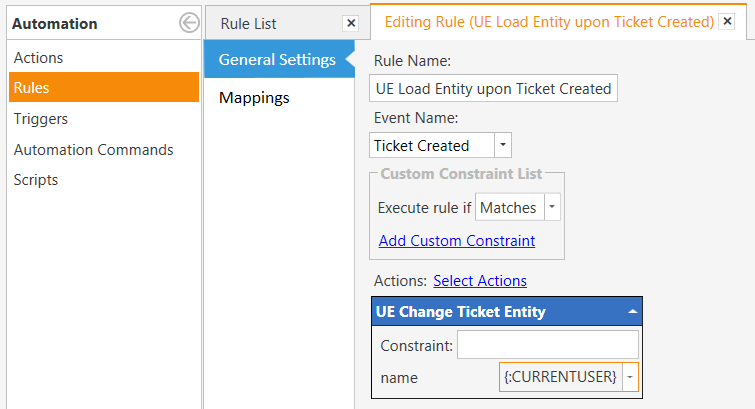 Yes, you can use Custom Reports to pull just about any data your heart desires. That said, the Work Period Report already shows Sales based on Users.

What is the process to create the entity type “waiters”. Entities make sense to me, however it is still a new concept I don’t understand how it appears in your drop down menu of “Entity Type Name:”? 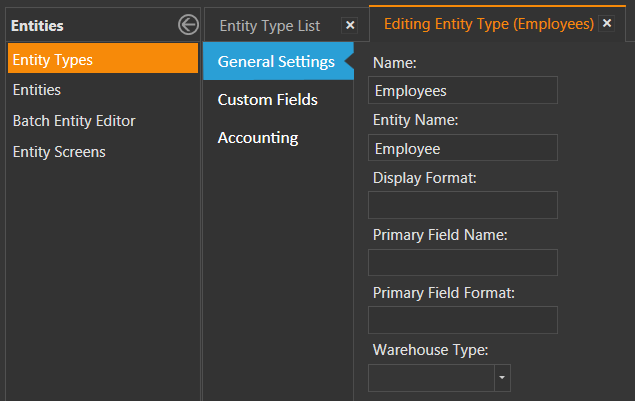 I think this request (transferring tables between users) keeps popping up pretty frequently. What are the chances we can have this request as a build-in option of SambaPOS. It is a core feature for most restaurant POS systems.

I understand this can be accomplished using Entities, but it is not as end-user friendly. A manager(or any non technical person) can create a User, but it is much harder to setup Users and Entities.

It is a core feature for most restaurant POS systems.

What makes you think this is not a core feature for SambaPOS? What do you mean by core feature?

By core I meant as a built-in feature without additional configuration. We should be able to change tickets from one user to another without creating Entities.

You realize tables are entities and change table is configured with entities? What makes samba unique is the fact that there are few default built in features dictating how we use the pos. I personally do not want this as a hardcoded feature because I would not use it and I do not want it in my pos screen.

What attracts me to sambapos is how its configured. If people would get past the stigma of it being different and really spend some time to study it they would find it is not hard to do these things

I want as many people using samba as possible. But I would not want samba to change its identity just to be like other pos for the sake of easy. There is a small drawback to this type of model and that’s the fact that a few people who are only interested in turnkey solutions may get disappointed. But eventually somebody will offer samba preconfigured as a service to meet these needs.

We have to realize that samba is different and it by design will move away from hard coded features. But in v5 @emre has addressed this with an upcoming feature that will auto configure shared more advanced features for you. And we as a community will be able to share these configurations. No its not the import tool this new feature is different and can give you options during the setup.

I understand tables are entities and I also understand SambaPOS is mature whereby this feature can be configured if you know what you are doing.

I love the way Sambapos works. The only reason why I am asking is because it keeps being requested even though we have had multiple discussions in the last twelve months the way SambaPOS works.

Thank you @Jesse, you are a great asset in these forums.

Maybe what we need is someone in the community to take enough interest to share their configuration on this. Our focus should be strengthening the community and helping it grow. I have not attempted it yet because I do not need it but maybe I will sometime.

It is a needed feature if you have over 8 server per shift. It will be even better if User Entities are created automatically when a User is created. Just my two cents!

We almost have the ability to do that now. All we would need is to capture the event of user created.

Maybe what we need is someone in the community to take enough interest to share their configuration on this.

I agree, it could be built in to a DB Tools Import file.

Still, there is no way to configure it exactly and specifically for every Users need. Perhaps with support from YAML files that will be available in V5.

Our focus should be strengthening the community and helping it grow.

Exactly. The real point is that different people do things differently. So we tend to spend time on helping people help themselves by trying to teach them how SambaPOS works. That way they can build out whatever feature they want, completely to their tastes.

There is nothing special about this particular request for a built-in feature. It is not a Topic that comes up any more often than most other Topics.

What I tend to do, is that if someone has an idea on something they want to see, and I perceive it as being useful to me, I will build it, trying to make it as simple and flexible as possible. But it is the teaching process through the Tutorial that is the real value for others (and myself) - not the canned solution (even in the form of DB Tools).

This is the power of SambaPOS. It isn’t about building in features that only a percentage of people want.

Thanks @QMcKay I did this initially, however it didn’t appear at the drop down. I agree with comments below that I like the flexibility of SambaPOS its just a little of a learning curve. I have to put this system together for service in 2 months so I’m sure I’ll have more questions. Thank you all for all the great support, everyone.

@QMcKay - I followed your screenshots and I don’t see the Employee or Waiter above the ticket when creating or opening a new table in POS. Other than creating these two actions, two rules, and a single role type is there anything I’m missing?

(1) Waiter is assigned to ticket upon creation based upon their user/pin login.
(2) Being able to transfer waiter entity to new user based when their shift is ending.
(3) Being able to print out a report with their sales totals after transferring waiter entity and cash out their till.

(2) Being able to transfer waiter entity to new user based when their shift is ending.

What do you mean by this? Every time a user logs in it will assign that user as the Entity on Ticket Creation. What are you transfering?

In his example the user IS the Entity. There is no Employee and Waiter they are both the same.

sales totals after transferring waiter entity and cash out their till.

I still do not understand what you mean by transferring waiter entity. What and where are you transferring it?

I changed the option ‘Can Update Null Entity’ to true. I still do not see any Waiter entity specified when I open a new ticket. I see Table and Status. I can post my screens later today and maybe you can point out where I’m missing.

What do you mean by this? Every time a user logs in it will assign that user as the Entity on Ticket Creation. What are you transfering?

In his example the user IS the Entity. There is no Employee and Waiter they are both the same.

Yes, the user is the entity and there username is assigned when the user logs in to the entity Waiter (ideally I still don’t have this working).

I need to be able to reassign the Waiter entity to another User to the table prior to settlement. Because our waiters are their owner cashiers if a waiter needs to end their shift, but still has tables those tables need to be transferred to another waiter (rather than settling the ticket or voiding and recreating the ticket).

I still do not understand what you mean by transferring waiter entity. What and where are you transferring it?

As mentioned above, I just want to reassign the ticket to a different user prior to settlement. I then want to create a report that prints sales based upon the waiter entity versus user. That way the waiter can print a report and cash out their till based upon the tables they actually settled and negate the ones they created prior to their shift ending that were reassigned.

Ok I get you now. You probably configured something wrong and when you can show us we can help you figure that out. For the other issue we would need a different flow. I’ll think about it and present you with some options.

PS I am working on a flow you may like better it does not use users.

Here’s what I got going on. It pretty much mirrors @QMcKay set above. I really appreciate all the help. I have about 1.5 months before I have to have this system active. 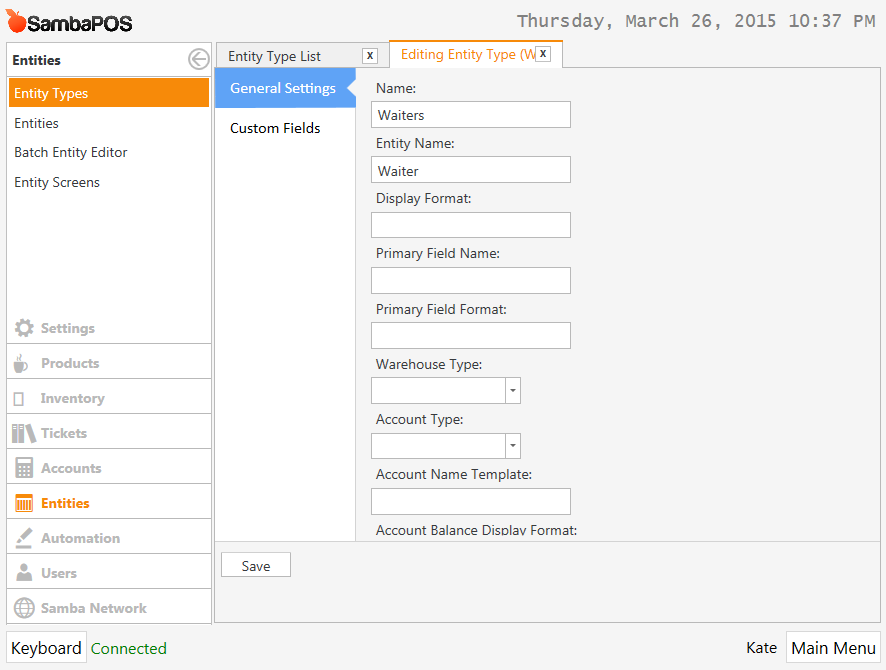 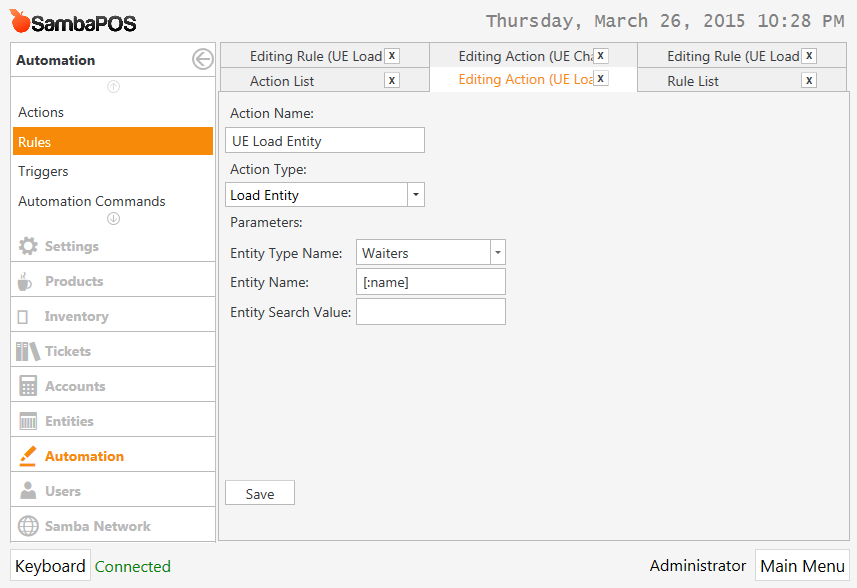 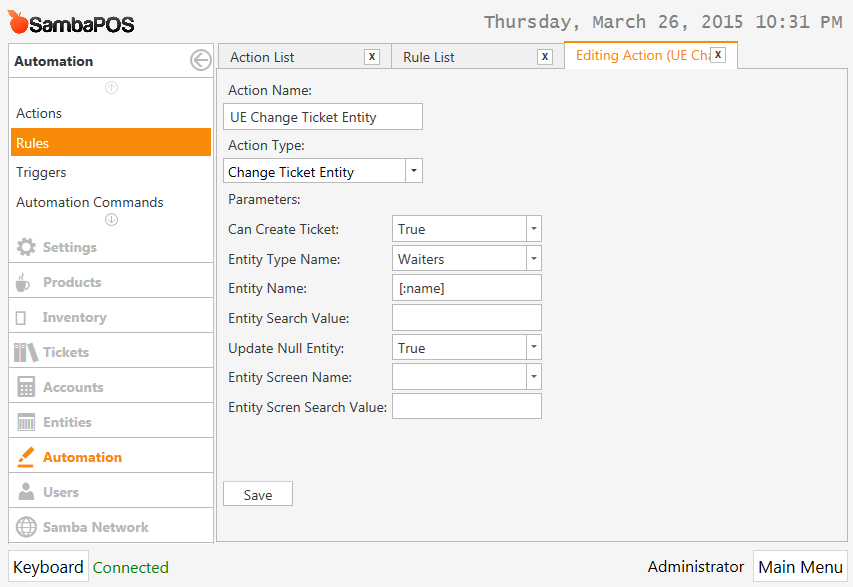 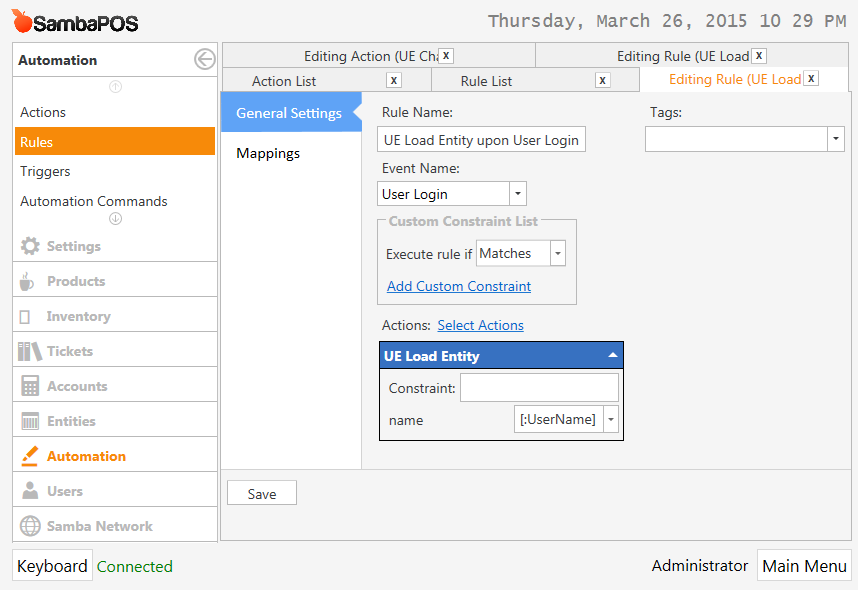 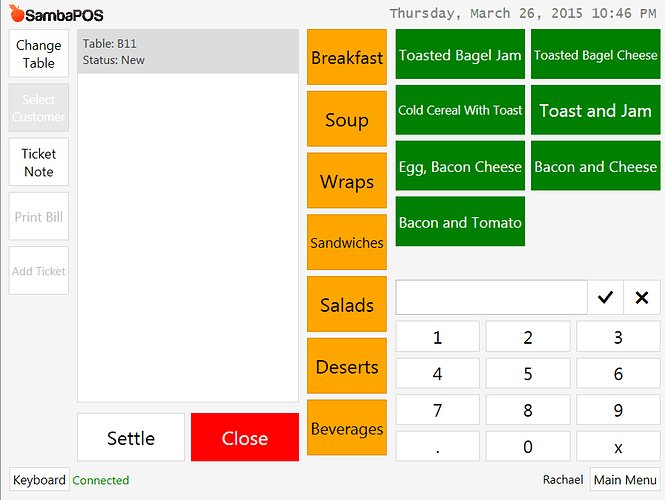