Here is what I am working on. This is going to be only available with V5 due to the navigation screen. But I will share it with you guys.

What this flow does is requires Employee to enter their Password when entering POS. All passwords are 4 digits. It checks the Length and Checks against the Entity Data Password. If match it assigns entity and allows tickets. If not a match it says Invalid Password you press ok and it takes back to Navigation.

This is a start I will customize it further like maybe instead of going back to navigation it will just require Password Entry again or maybe have option to override it with Admin Pin.

Also I will put the check in place to see if they are clocked in.

PS This method fixed the blank Entity issue because its checking that before it executes Change Entity. 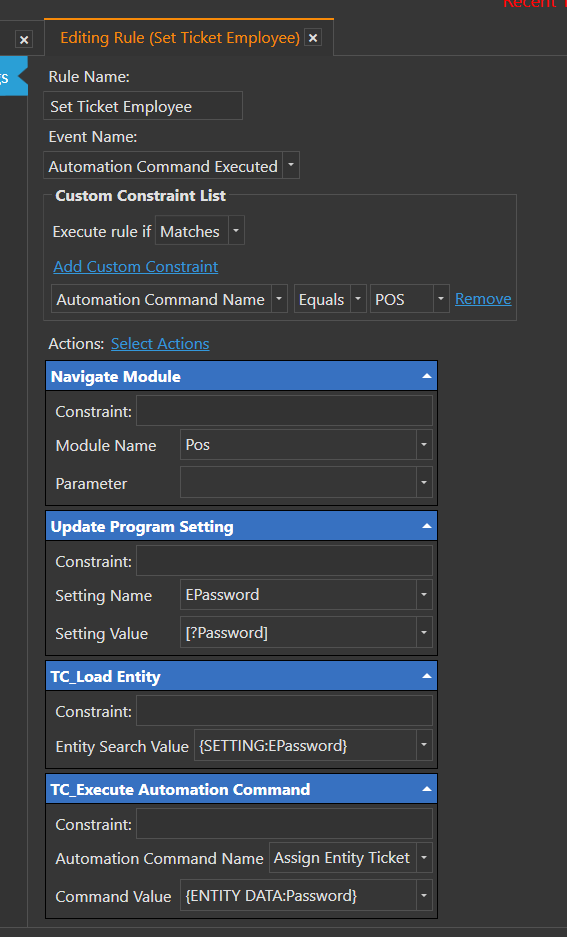 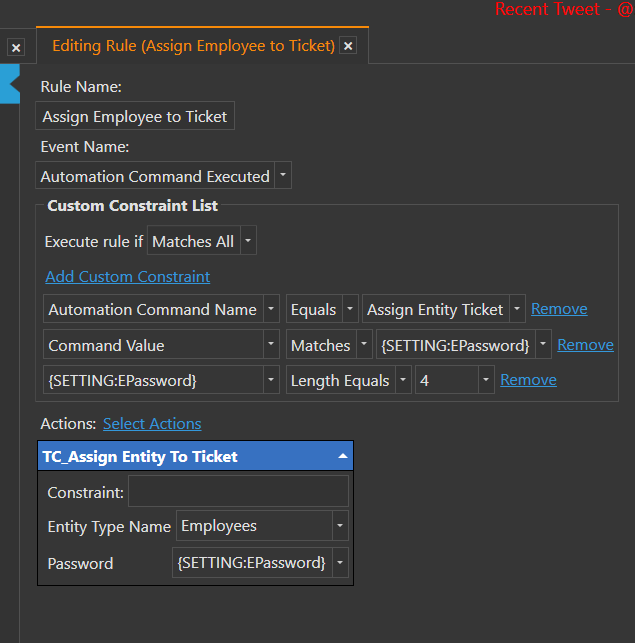 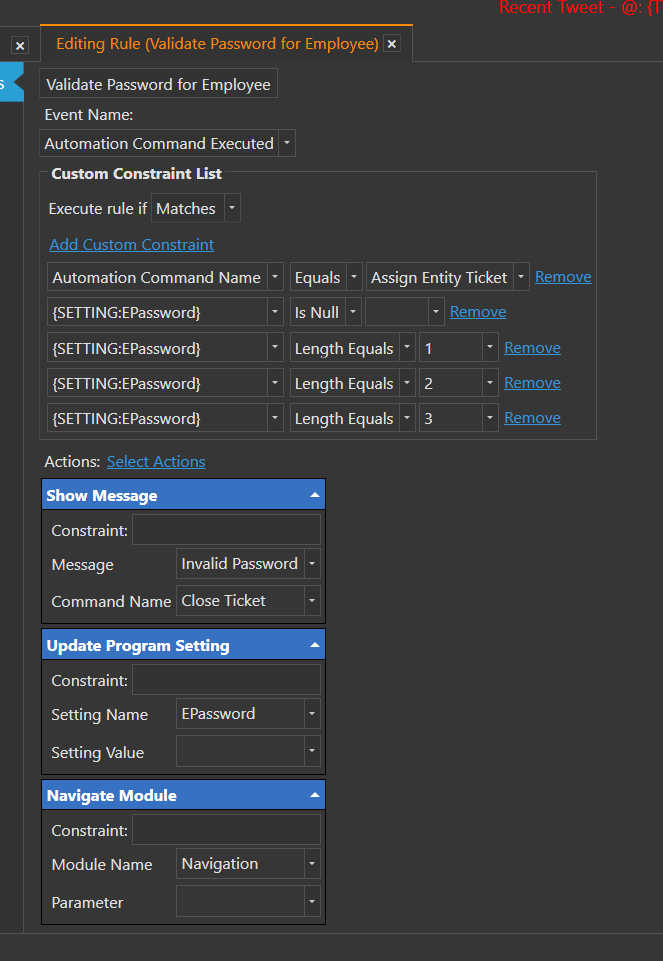 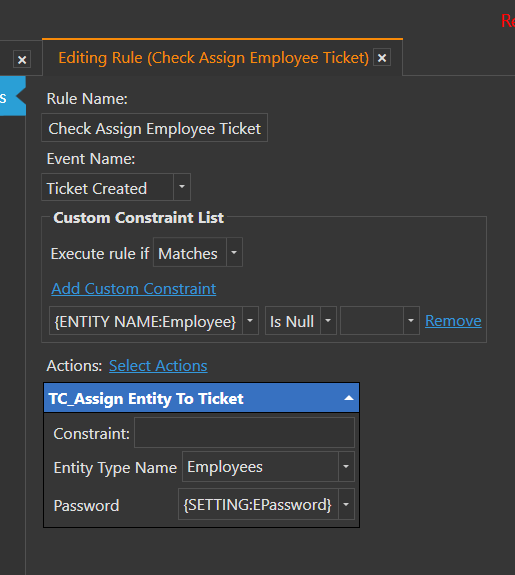 Video of it working coming up in few minutes…

@hadjieff even better I will design a configuration task for it. You don’t know what that is yet but when version 5 releases I promise you will like it. It is much better than sharing the database.

Hey @Jesse any idea what I’m doing wrong with my current setup?

Your sure your users are named the exact same as your Waiter Entities? 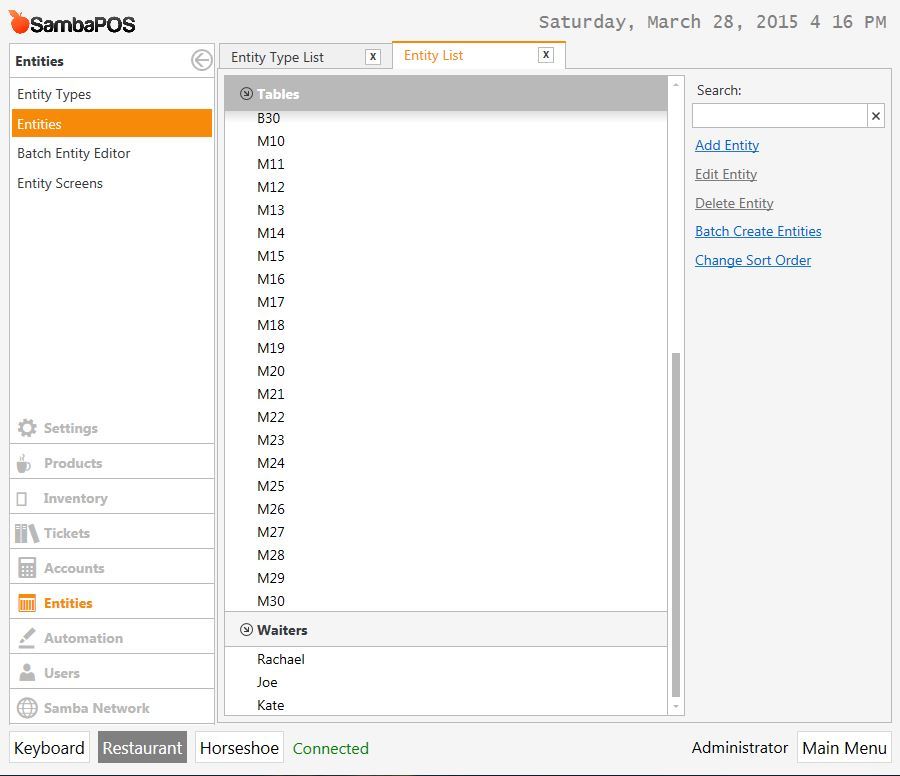 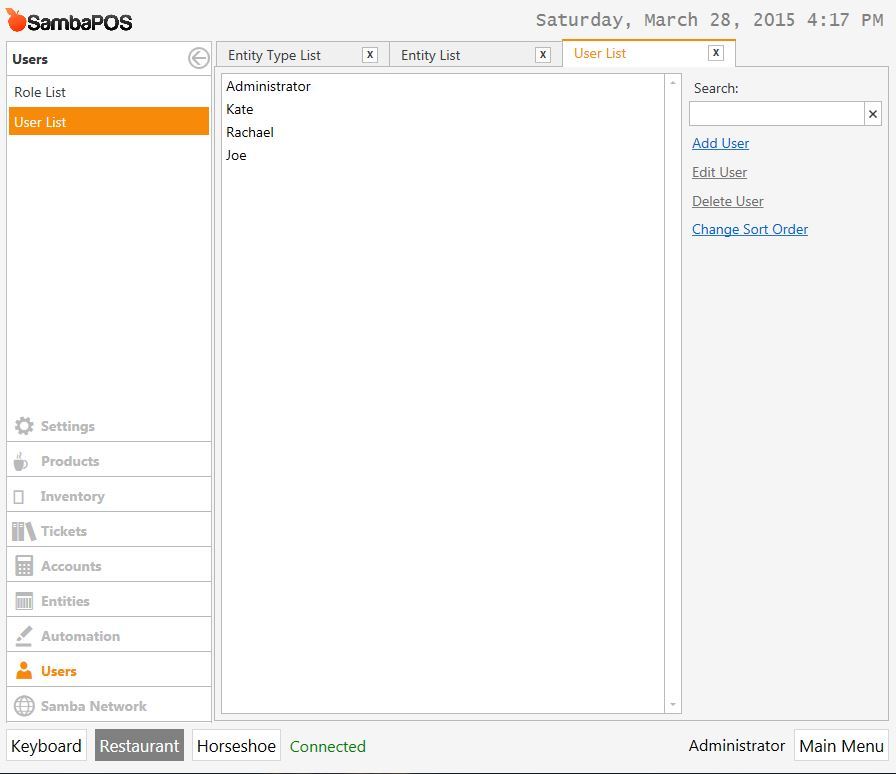 Show all of your rules and actions. We need to narrow it down. It is probably a typo. 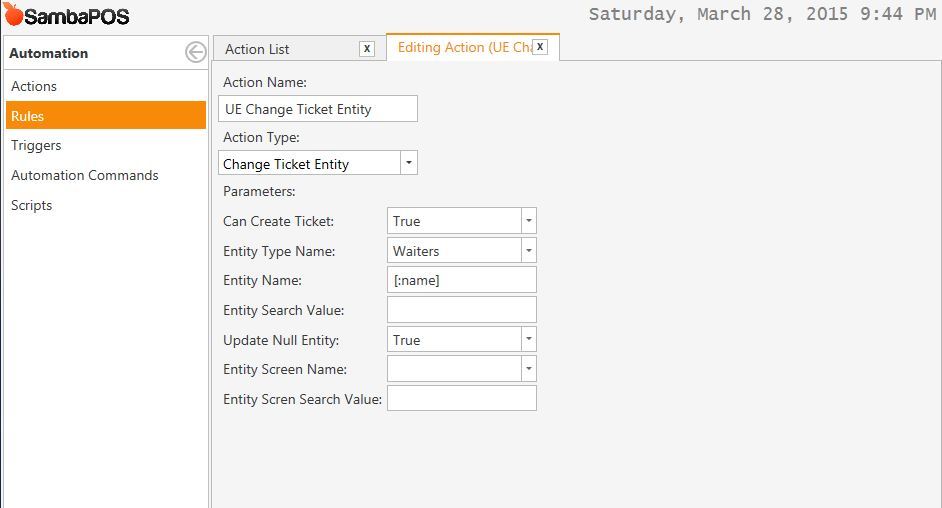 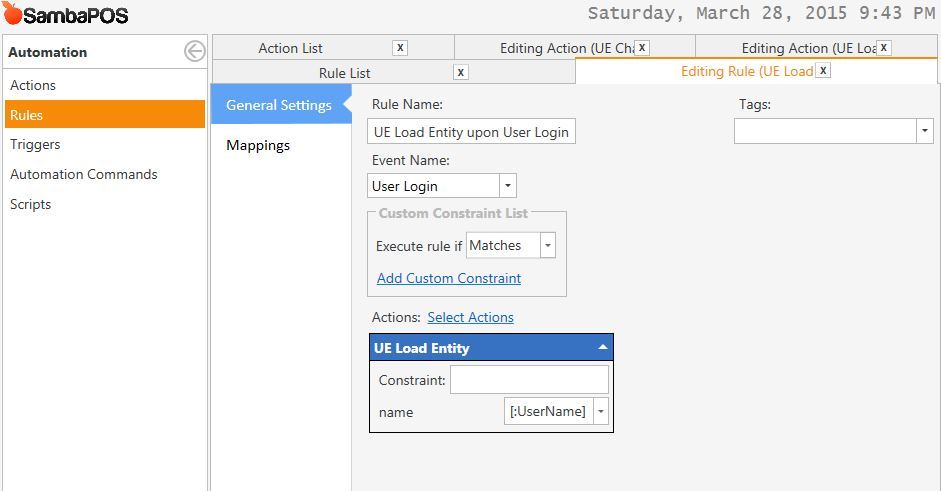 Don’t have to load an entity. Change ticket entity is enough.

Got it working. The rule wasn’t “mapped”. I guess I just figured that rules were immediately mapped. Now how would I go about adding a button to “change waiter” to the current user and if possible have the current waiter or an admin input their pin?

I was able to create a “change waiter” button by creating an automation command and then running the action for updating the entity.

The only thing I’ve noticed is that the entity on the screen doesn’t refresh until I go in and out of the ticket. Is there anyway to refresh the ticket screen? 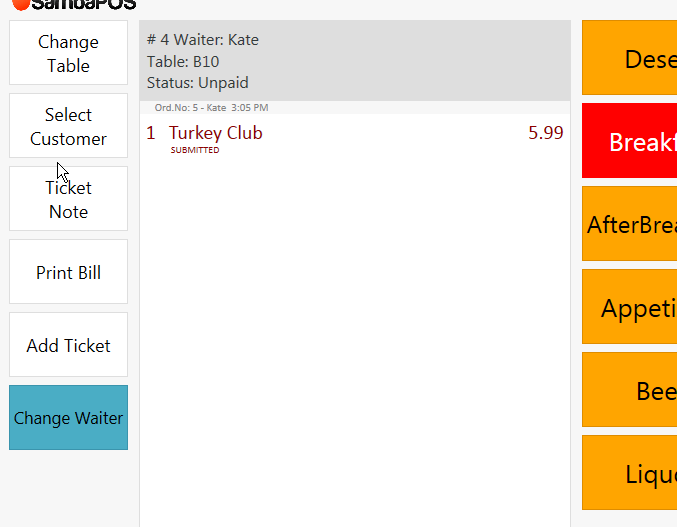 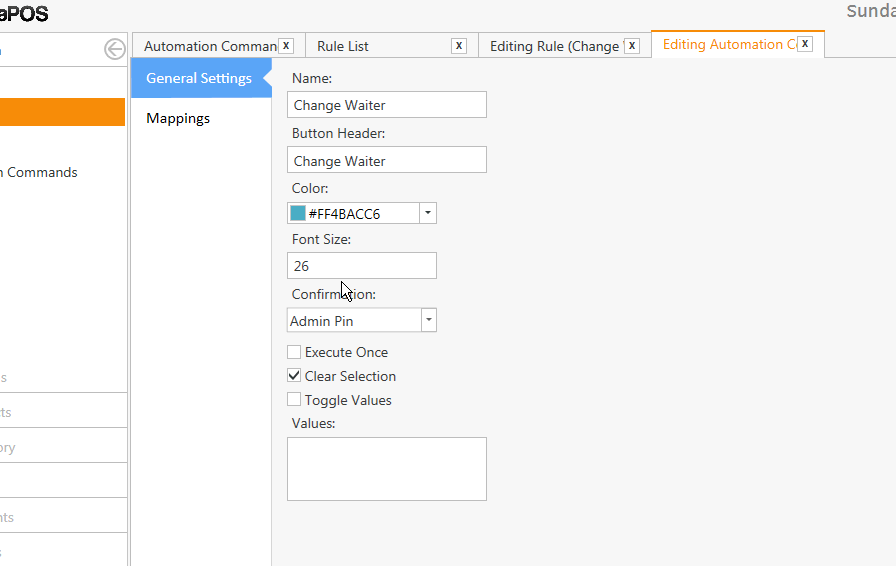 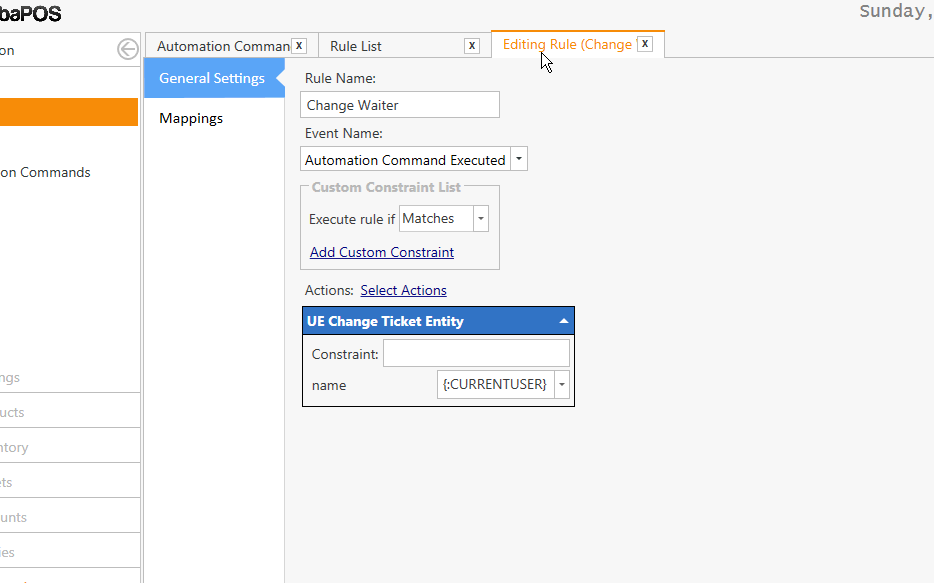 Put a display ticket action in the rule to run last put 0 for ticket id.

That worked great what does “ticket id = 0” mean?

Its displaying the current ticket.

If you put 1 it would display ticket 1

In order to complete the use of the “waiters” entity for me, I need to get a custom report working which will do an “end of shift” report based upon the “waiter” entity for people to count out.

I’m just starting to dive into the module (got it yesterday). Has anyone completed a report like this yet. Basically…

Take a look here it shows all the possible tags for custom reports.

And this is the main Custom Reporting Wiki

I think I got it figured out. Any way to access the current user within custom reports? What would that syntax be?

I’m thinking this should work.

PS Case sensitive… if its caps it has to be caps.

However there is one flaw with that syntax… what if current user is admin just to view reports?

If your tying users with Entities then it wont matter in the reports… you just need to look at sales per entity. Or Sales per User. What would be the purpose of linking the two in the report?

The idea of using CURRENTUSER is that only that waiter should be able to see their totals. I don’t think there is anything to gain from showing all waiter totals.