Ok, I will do research about Update Ticketr Calculation, I’m very bad at programming but will try my best >.<

Btw, is there fiverr guys doing this kind of modification?

That way can remove the service charge if the order is to go?

When you use “if” in your request that is programming

Thanks for the reply @emre

I do search about update ticket calculation and found:

hi @emre i’ve been looking around how to add services charge ? i follow instruction same as make taxes, but the result is not as expected

Which is the answer to one of my question. However can I know how to auto add the 5% Servicing charge ? Not by have to manually go to "settle and then press the “Service” button and then “Print Bill”?

Can I automate it and then if I want to remove the servicing charge I can press the button instead?

Two ways to automatically add service charge to a ticket:

You can use the Update Ticket Calculation action and an Automation Command Button to remove the calculation by setting the value to 0 in the action.

WOw @kendash thanks alot, what a fast reply.

I manage to auto add by remove the Header portion blank.

Now figuring out how to add button to remove it for “to go” haha. I assume use update ticket calculation , let me try tonight and see…

But I can’t make table start with “B” letter servicing charge removed.

What I did wrong with the program? 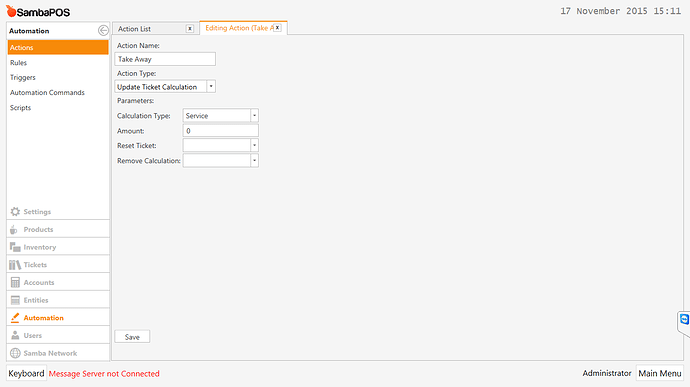 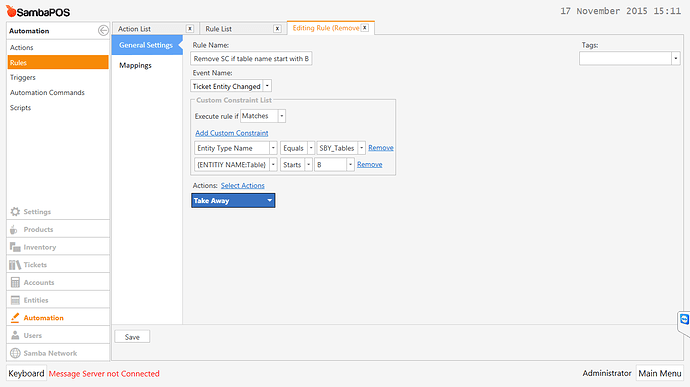 I tried to make remove calculation “true” as well.

Actions that are assigned to Rules and are later changed will not update in the Rule.

So if you already had the Action in the Rule, then changed the Remove Calculation to True, you now need to go into the Rule, remove the Action, save the Rule, open the rule and add the Action once again, and save again.

@QMcKay I tried and still not working

I tried to add Servicing Charge now exactly like the tutorial but is not working, I think something wrong with the entity name part…

I think something wrong with the entity name part…

Yes, it should not be ENTITIY

Thanks @emre spotting that. I corrected it and still cannot work 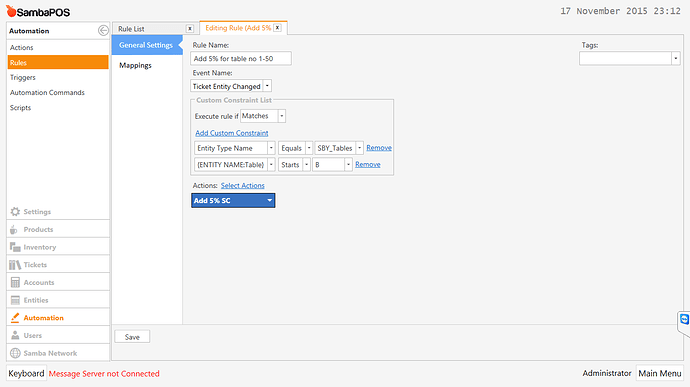 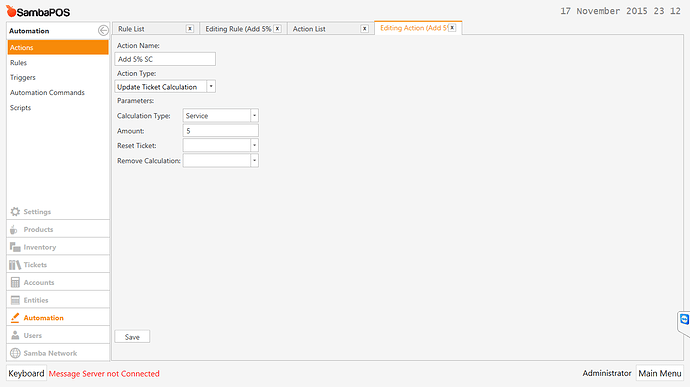 If entity type name is SBY_Tables tag should be {ENTITY NAME:SBY_Tables}

Hi @emre you are my savior… thankssssssss. it’s working now. !!!

Btw how to make the following:

I want the service to show after the sub total and before taxes.

Previously it was there. I tried to move it after the sub total ,

And the printed receipt still show the service located above the Sub Total, what I want to achieve is to have the Service after (below) the Sub Total and before the Taxes.

Still no luck, I tried to re-arrange / sort from the Action & Rule list also no luck.

Another question , can I have voucher payment button on the “Settle” screen and also displayed on work period report next to the credit payment without using Custom Report module?

You can not put buttons on work period report screen. You must use custom reports and a custom entity screen to add buttons next to reports

3 posts were split to a new topic: Help with taxes