Am I correct to say we do not have report expression for TICKET ORDER DETAILS?
Have tried encase it just wasnt listed and doesnt seem to work.
Am pulling my hair out trying to put together this discount based on second price list setup and am hitting snag after snag.
Rules already getting overly complex getting arround update calculation knocking out autoselect from menu item and although thought I could achive using state values and {PRICE:X} but thats going to involve a bunch of update states on several rule events to keep corrected.
Had hoped to used order state value total but that wont work as cant update state when order qty changed with +/- as far as I can see and cant take qty into account on order state total…
Although even if this existed I would bet it wouldnt have ability to look at price tags and only see order price so would still need to request additional fields/functionality…

@QMcKay, Kendash, either of you have any thoughts on this?
I have changed the state dalue to be the amount of discount so this now means {TICKET ORDER STATE VALUE TOTAL EXP:REGDiscount} shows total however am unable to account for changes of quantity.
Tried order selection changed however this seems to only trigger on order selected not unselected, ie select increase +1 qty unselect… nothing, select again and it updates…
TICKET ODER DETAILS if it existed would work I think as would be able to calculate the sum of qty*REGDiscount state value I think…

Was updating a second order state to cause a ‘loop’ of order state updated events to check the discount value amount.

Have tried to add constraints to limit triggers but turning out very complex.

Tried ticket total changed but the issue is the calculation stems from a second price list. 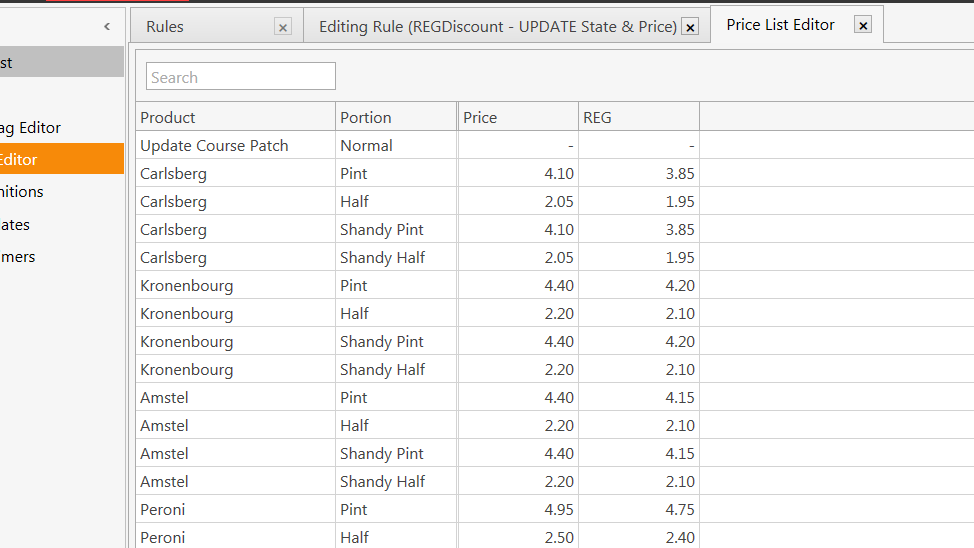 Previous I just changed price list but trying to turn the ‘discount’ into a calculation rather than change order prices.

So far have managed to get the amount of discount to be set in an order state;

The discount you want to show whole ticket or each item?

I want to set a discount equivalent to the difference rather than changing the prices. So I can then allocate the discount to marketing account in our PMS via my integration using the discount amount with our new extended loyalty offering.

The main issue is there is no curent ticket type report expression available which can be used to calculate the discount amount, hence the attempt to use state values and the ORDER STATE TOTAL EXP expression.

The issue on that comes up with the change qty buttons…

Can you expand on that? Ticket Total changed doesnt have reference to select orders.
Have tried working with ORDER SELECTION CHANGED event but it only triggers on order selected not unselected which is what would be needed.

Just try put {SELECTED ORDERS} in show message in ticket total change event and see if it does have anything.

Then I think you may have to have Order State Discount per Unit and Total discount loop all orders Sum( QTY * unit discount) in ticket total change.

Select All orders action and put in loop value. Not efficient but that all I can think of right now,

cant workout how to restrict the flow not to run multiple times. Tried many many constraints to try and restrict the runs but each change brings other issues to light.

ORDER LINE TOTAL CHANGED or ORDER QUANTITY CHANGED events would be handy right now.
Or disabling those bloody +/- since we have no way to catch their use… Has come up several times on other posts.

The old system had an update discount button but was trying to avoid that and make automatic like it should be.

Stuff it in Settle button lol

Stuff it in Settle button lol

I know, it should show price after discount before click pay. Just ran out of option lol.

Don’t know any help. After click +/- it show QTY. There is no order id because it is non submit order so, always 0 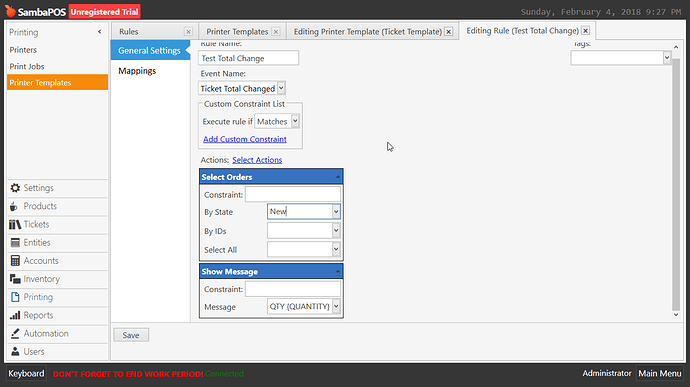 Works only with 1 New order