I have tried and tried but cannot find an answer
when I print a ticket I get a
VB
then é at the top with the centered T I c k e t
plus a ! sign at the start of every line
so
VB
!éééééééééééééééééé T I c k e t éééééééééééééééé
!Date:

etc etc
any help would be appreciated

Dont know if its of any relevance but in retail company i worked for when the system went offline ! printed to alert cashiers there was no network connection I dont know if this has anything to do with your issue but thought id share just in case you have a network issue

Brand new installation on a remote system no internet connection at all system was loaded from an install directory on local hard drive which was copied from USB stick, so nothing connected lan/net wise.
thanks anyway.

thanks cracked it, something as simple as that.

Hi Bad news, I had the drawer opening perfectly and put the open drawer button on the payment screen, now today I cannot open the drawer.
I have deleted and re-input the settings from the tutorial and nothing, in window mode I get the printer icon come up in the lower right side of the task bar but nothing else,
I am using 7 which was working fine until today.
I have uninstalled the printer restarted the computer and re-installed and set all as should be, I checked the web on star and they directed me to the printer properties in windows and set the default properties.
where do I go next???

If I switch to windows printer all ok drawer opens but font is too big on tickets
switch to ticket printer and font is ok but drawer wont open???

Have you setup a printer template and print job to open the cash drawer?

I use an epson esc/pos printer that is set to fire the cash drawer when the receipt prints. If i need to manually open the cash drawer i need the printer to be told to print something so it will open the drawer, so you just need a printer template that has nothing in it other than the command code that your printer uses to fire the drawer

If the drawer doesnt open when the ticket prints either see if you have a setting in you printer to fire drawer when the receipt prints and activate it, or create the printer template and job as above and set it in a payment processed rule with a constraint of remaining total equal zero. When a ticker has been fully paid the rule with exexute with the open drawer print job and the drawer will open

If I switch to windows printer all ok drawer opens but font is too big on tickets
switch back to ticket printer and font is ok but drawer wont open???

Ok as above , I have started the drawer opening part OK and the code is right. its now just the font size is too big when I set to the windows printer, it opens the drawer perfectly but FONT size
I have tried but nothing seems to change the size???

Reading what you posted above i thought your issue was with selecting ticket printer the cash drawer wont open which is what you said!

Are you not using ticket printer as the setup to print receipts then? You use windows printer setup instead?

If receipt prints the correct size when you select ticket printer why not just leave it set as ticket printer and add the open drawer action so it opens?? Then it will works as you want

Ok Sorry for any confusion.
I have tried both ways.
Both print ticket printer correct font but will not open drawer.
windows printer which is the only printer connected open the drawer but the font is too big each line is printed over 3 lines.
I have tried all I can in changing the font size in the template using but nothing changes it.
could I make the ticket printer do the tickets but have the windows printer open the drawer?
how would this be for receipt on cash? 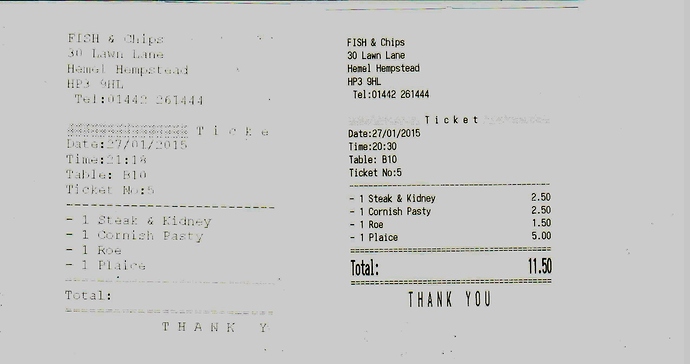 on the left windows printer on the right ticket printer

Have you tried this kick code?

Try that, instead of simply <XCT>7

If that doesn’t work…

Have you tried HTML Printer? If not, give it a go to see if the output is Ok and the drawer kicks.

If the drawer kicks, but the font is no good, you can alter it using CSS HTML tags within the Template, for example:

Note the <div> tags. It sets the overall Ticket Font Face and Size.
Later the <span> tags set the font Size to a smaller value for Order Tags.

If you still have wrapping of lines occurring, lower the Character Count in the Printer: 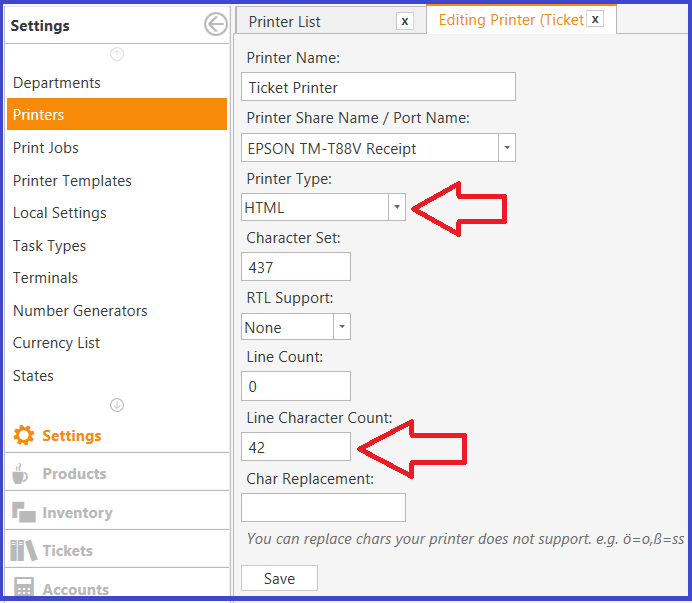 with html, no drawer movement nothing printed and watching my printer properties see a document go in to the spooler and straight out again. but nothing on drawer

And have your created an Open Drawer button?

On this tutorial I’ll show you how to operate cash drawers. ###Connection types Serial Connection: Drawer connects to PC through serial port. This connection type is not recommended because drawers does not have power source of their own and to be able to kick drawer they use power from serial port. If port voltage is not enough for cash drawer it won’t work. If you have that kind of drawers on hand you can search Google for USB powered kickers. RJ11 Connection: Drawer connects to a recei…

could I make the ticket printer do the tickets but have the windows printer open the drawer?how would this be for receipt on cash?

Why not just have the ticket printer print the receipt AND open the drawer? either set the printer to automatically kick the drawer when a receipt prints (set up using the printers software) OR create the open drawer print job and add it to the payment processed rule, that way when payment is processed your receipt will print and the drawer will open.

What do you mean “how would this be for receipt on cash?”

could I make the ticket printer do the tickets but have the windows printer open the drawer?

Fire both Print Jobs when the Ticket is Settled.