Ticket Tag not applying for after Create Ticket Action

Im trying to add a ticket tag after a ticket is created by the “New Waiting Ticket” button. The button is creating the ticket just fine but for some reason the ticket tag wont automatically apply as I defined it in the rule. Can someone please tell me what im doing wrong 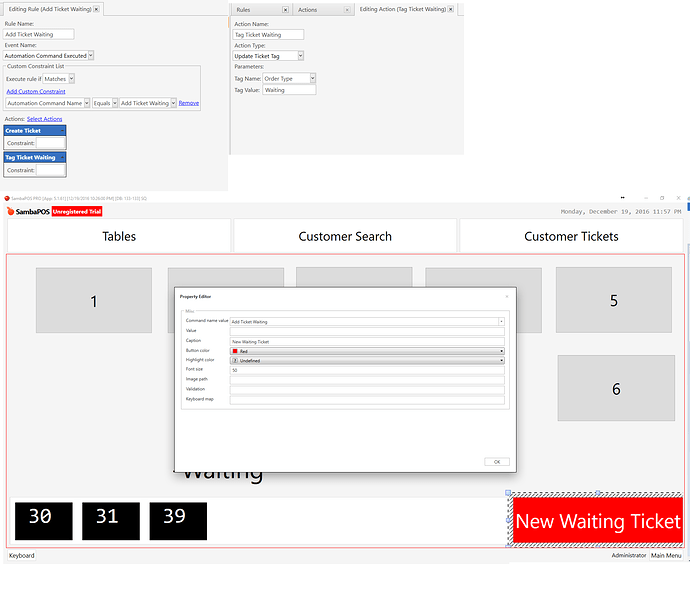 Yeah but I only want it when ticket is created from that button. Won’t that tag even other tickets like tables tickets and customer tickets?

Just tried that but it doesn’t seem to be working. I think the issue is that samba doesn’t know which ticket to tag because the actions are being fired on AC Executed rule and that probably doesn’t have access to ticket id and stuff.

Ok, humor me for a sec, try adding an add order then cancel last order action in sequence after the create ticket and before the tag action.

cancel last order action in sequence after the create ticket and before the tag action.

Lol no it still doesn’t work

What happens if you trigger the main create and tag rule from the button if your on the pos screen without a ticket started?

This is what I’m trying to accomplish. When customers walk in and just want to order some food and leave instead of dine in they go up to counter and usually pay immediately. In the case that they don’t pay immediately and waitress has to navigate to another ticket I implemented ticket lister. Whenever “New Waiting Ticket” is created I want the Ticket Tag “Waiting” to be applied. 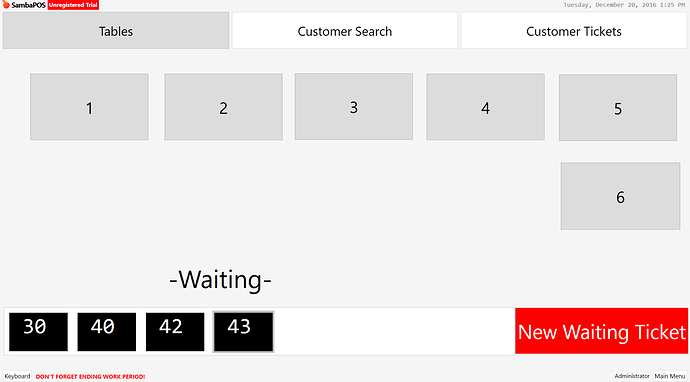 To eliminate the entity screen as a factor.
The tag ticket button on ticket screen to create and tag the ticket.

Well new tickets would be created from the entity screen though? Sorry I’m a little confused tbh.
That Tag Ticket AC is just there for testing so I could make sure my tag ticket action works

I get that, I was suggesting it to check if it was specificity for command from entity screen rather than being on same rule as create ticket action. Ie if tag worked on rule triggered from rule on ticket/pos screen where tag was on same rule as create ticket (where no ticket is currently open obviously).
If it worked from there it says its because its coming off the entity screen and not that the ticket is being created in the same rule as its getting tagged.
Out of interest if you do the same as above again without the cancel order does the order from the add order action actually get added as it may be getting prevented for similar reason as the tag not working…

Order does not get added. Probably same reason

Ok, so to me that suggests its something related to coming off the entity screen rather than the tag being in the same rule as the create ticket…
To check try another action, update ticket state or something maybe.