Ticket template preview does not work with my V4 Restored database

I follow a guide to restore V4 database on SambaPOS V5. All seems to went as smooth as butter. However, I noticed that now the ticket preview features is not working. and it fault seems to be from my old V4 database as I also tried a fresh sample DB and this features seems to work. 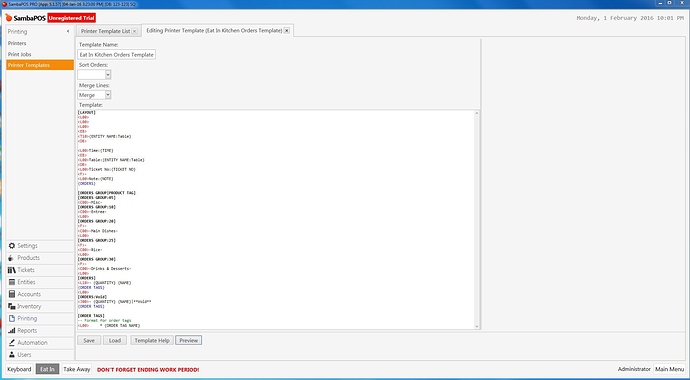 Have you come out of manage to go in to POS to print?
Did you close the template?
Reports does that is you go back to main menu to go to actual reports section without closing the tab etc.
Close all managment tabs logout and restart samba.

I saved the template & I tried restarting SambaPOS, but still no luck

Any actual sales in system yet?
Not sure what its used for the sample/preview, think its last ticket closed.

yep, the first time SambaPOS warned me about that too :). Still nothing though.

Thanks for the awesome guide.

I have managed to set this up with 2 columns (1 Showing Slideshow/Another side transactions as above). However, I’m stuck in getting it to display the Tendered and Change Due to work. The number $0 is generated, however it doesnt reflect the true amount. I use the same {commands} on my Ticket Printer and it works fine. Also feel free to use the code below and tweak it for your needs. For all intents and purposes it works fine except for the Change/T…

Unfortunately, without this ticket template preview feature, it adds a bit more work to test

To use preview you must run a ticket first.

Hmm I’ve never noticed an issue with it. Try closing WP and opening new one then run ticket then check preview.

Did you tested how default templates works? If they works fine post your template here so we can test if it is template related.

That is a Transaction Template. It is not used for Tickets. It will print Transaction Documents. If you have not created any Tx Docs, you will not see a preview.

P.S. The name of that Template is slightly deceiving. It is not meant for Tickets/Receipts. It is meant for Account Transactions/Documents, like paying with Customer Account, making payment to a Customer Account, or paying suppliers, expenses, etc. It shows fund transfers between Accounts. Tickets, or Customer Receipts are something different.

@emre Yes it also has problem with my old DB , i mean i converted V4 to V5 back up restore may be this mighta a problem? But i tried creating new databse and thats works fine . And reports shows good only tickets not showing thanks.

Can you send me a backup?