To have buttons on the screen only 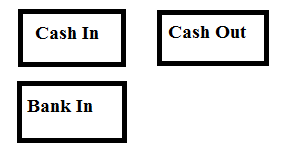 i was thinking to have a separate department Accounts where we have these three option to key in data.

have a look at my tutorial

This tutorial is for setting up a petty cash system for personal/emergency store expenses, for example you run out of milk or an ingredient and you have to go to your local shop/supermarket to buy it as a one off or you might need to purchase stamps to post a letter etc. I have set this up using the same methods and account set up and account transaction documents in rules and actions that I used for Till Floats that you can read in my first tutorial Rick’s Tutorial 1 - Till Float so im not goi…

I have created a petty cash button (Cash Out) that only shows on the POS screen if a ticket has not been created, this runs through accounts, where you can then go to the petty cash account and balance this figure every day against your cash out receipts.

ive modified my system slightly from when i did this tutorial but the basics are the same, have a look and there should be a database tools file you can download so you can have a play and look a the rules and actions to see how it works

Dont for get to backup first

Then you could add your cash in etc buttons to that department and they would show down the left hand side, the rest of the sceen would be blank

Or it might be possible to create an entity screen with thise buttons on that you can use design mode to resize and position on the screen, then have one button on the POS screen “manager functions” or something that when pressed takes you to that entity screen where you would have cash in/out et

@madiha ive think ive set it up, this is a very quick setup so youll be able to tweak it to how you want 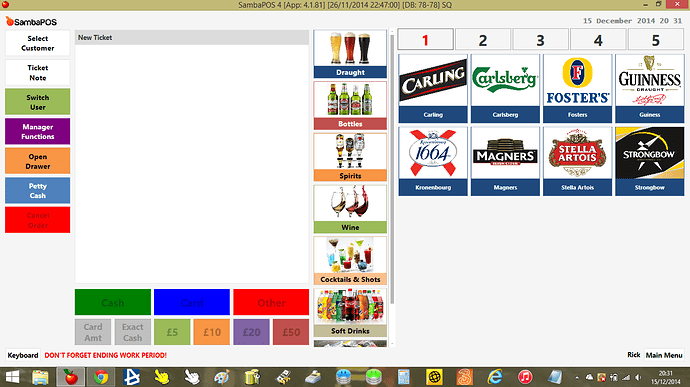 Press it to open custom entity screen, where i have added my petty cash button 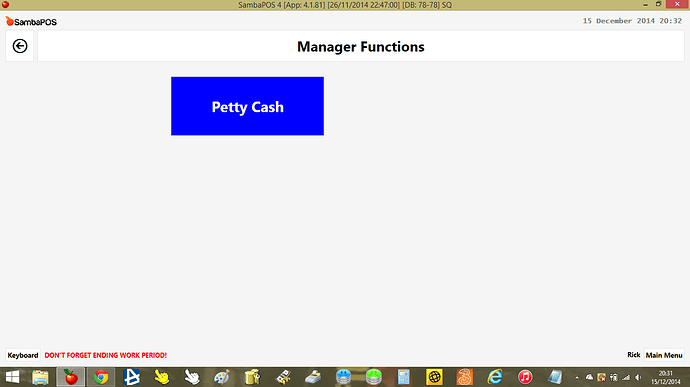 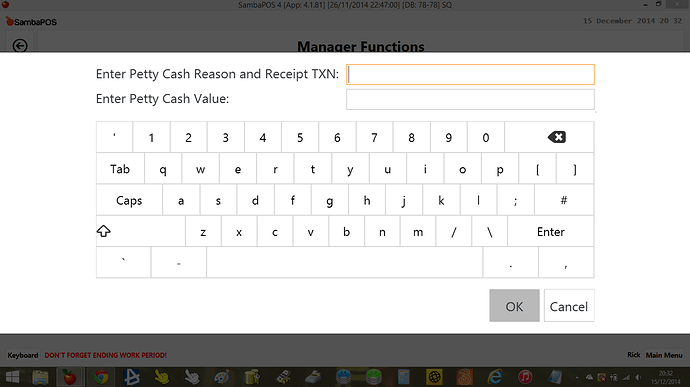 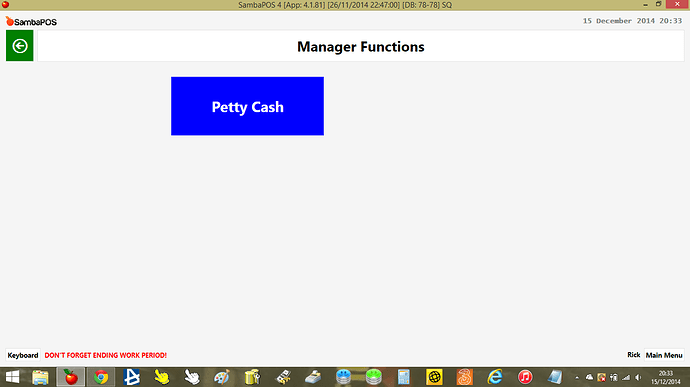 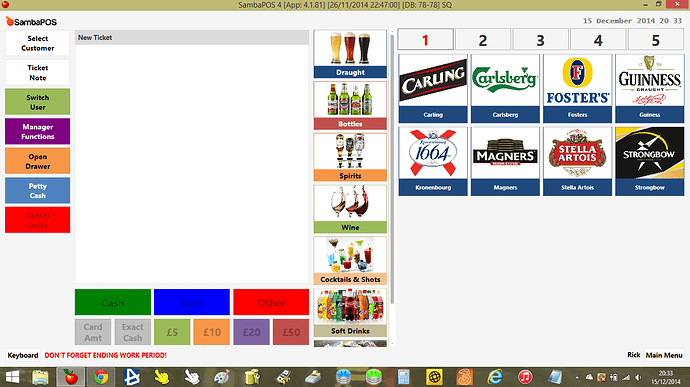 Hope this helps you! im going to re-design some of my setup to have buttons on one screen. you can also in entity screen setting add an image to the screen back ground and on the buttons themselves i think there was also an option to add an image on the image path setting

As i know this works by testing it with a button on the pos screen could this be an error?

I thought I answered this in a different post?

Its not working from the entity screen

As I said before this is by design. Your trying to do ticket function when not in a ticket.

If i can load entities by using the select customer button which is a process outside of the ticket why can i not do the same thing and add a staff entity from my screen as its the same things im trying to do??

If i can load entities by using the select customer button which is a process outside of the ticket why can i not do the same thing and add a staff entity from my screen as its the same things im trying to do??

Two completely different things. Select Customer is an Entity Select powered by the Ticket Type when you link the Entity Type there. You can link Employee Entity Type to your ticket and have Select Employee.

The button you made is different it uses an action and is meant to operate from within a ticket to Change Entity not select one. You also were attempting to tie into the same action ticket related functions like discount etc.

Ah ok, so could i use a button on my entity screen to just link my staff entity and load it onto the ticket?

What are you really wanting to do? I can probably help you with it.

i wanted to try and do the same with staff discount, at the moment staff can just swipe their card or scan barcode and discount is applied but there is nothing to stop this being done for every transaction of for their friends etc. so by putting this option onto my manager functions screen that screen is accessed by pressing the button on the POS that has admin PIN protection.

i also wanted to keep as many “functions” as i can on this manager functions screen so they are all together, its how id like it set up

@Jesse i have it working so that when i go to my manager functions screen and press my staff discount button (all this does is add the staff entity to the ticket) it works and adds the staff entity to the ticket if there are no orders and a ticket hasnt been created. If i have already added orders when i press the button nothing happens, any ideas?

Could this be that my Change ticket entity action isnt setup correctly?