hi guys ,i step by step fellow this method to import bulk product, unfortunately, its not work now. 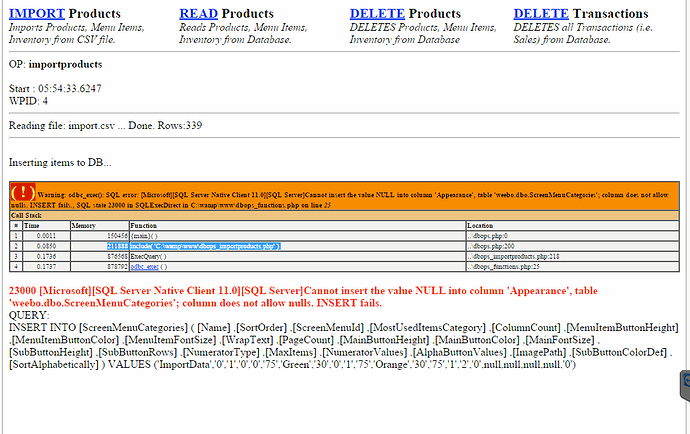 any one can make a now script for V5 version? Thanks a lot.

One option is you can now import products using YAML. Read here for more info

If you already have product data in Excel or CSV format, you can use a formula in Excel to convert data into YAML:

You will probably want to clean up your CSV data file. There are duplicate Products, and some wi…

This is not a version 5 issue. This is highly customized user made script and likely there is something in the script needs updated by you.

Issue category is for Sambapos errors or problems that are not configuration mistakes that should work but are not.

@weebo To fix that error you need to change the php so it puts 0 in table dbo.ScreenMenuItems and dbo.ScreenMenuCategories for column Appearance instead of NULL

PS: There might be few more areas we need to tweak. This is the one negative side to custom solutions like this, often changes may be made to the structure of the database that would need to also be made in the script. If you do not know or understand how the php is working then perhaps you might want to implement a different solution like what @markjw suggested.

Even though small changes may be needed from time to time for this php to continue working this still does not mean it is a SambaPOS issue. SambaPOS is doing exactly what its supposed to do.

Thank you for reporting the problem with the PHP script.

Kendash has answered your question:

@weebo To fix that error you need to change the php so it puts 0 in table dbo.ScreenMenuItems and dbo.ScreenMenuCategories for column Appearance instead of NULL.

often changes may be made to the structure of the database that would need to also be made in the script.

If I have time, I might update the PHP so that it works properly.

Thanks for your replay, today i try to modify the PHP, if working perfect, i will let you know,thanks a lot.

After i modify the PHP script, the importing function was working, but also had a little i really don’t know how to solve now. 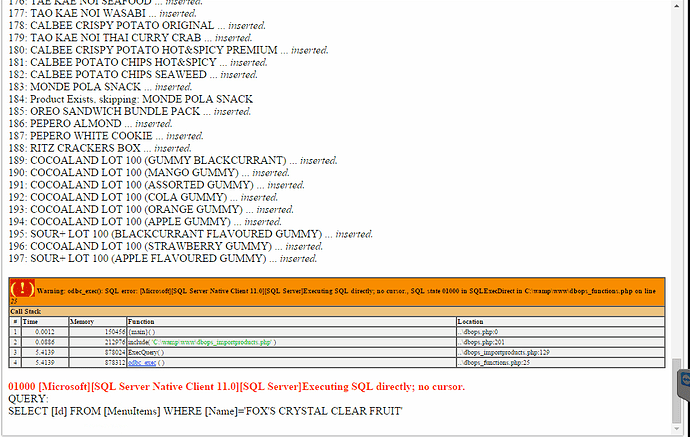 I think because the product has a quote character ' in the name (Fox's) and because the string is quoted with single quotes, any quote characters need to be escaped (I haven’t looked at the code myself). What do you think @QMcKay ?

Even though I updated the script(s) to be more modular, and to accommodate newer fields in SambaPOS5 DB Tables, the script is far from perfect. We should be escaping such things, and using prepared statements, both of which would make this issue moot.

In any case, the quick fix is to fix the data… remove any single quotes found in any of the the CSV fields and try again.

Thanks a lot, i already fix the issue, after i modify your script according DB Tables, and also deleted the <’>from my excel file.By the way, Thank you so much.

We should be escaping such things, and using prepared statements, both of which would make this issue moot.

Are there any samples of prepared statements for importing products from csv?
I was going to try using the v4 bulk importer but if there is a better method I would like to try that.

Basically I would like a similar setup to the v4 script with options to create inventory items, add to menus etc.

Are there any samples of prepared statements for importing products from csv?

No. I am talking about the PHP code. It could be revised to use prepared statements rather than concatenated strings. It should alleviate the need to escape certain things like single quotes.

if there is a better method I would like to try that.
with options to create inventory items, add to menus etc.

There is no better method at this time. The bulk importer is the “most complete” method for doing this. It inserts Products, Menu Items, Inventory Items, and Recipes for 1-to-1 products, all in one shot, very quickly and efficiently.

V5 Bulk Importer has been updated …

##Synopsis This Tool is primarily used as a Bulk Product, Inventory, and Recipe importer based on data read from a CSV file. This is especially useful in Retail applications where there is a direct 1:1 relationship between Items you buy from a supplier and Products you sell. As of this release, this Tool is compatible with the following SambaPOS versions: 5.1.58 - 5.1.60 (DB version 124) ::: dbops124c.zip (24.6 KB) Originally developed by @JohnS for SambaPOS 3, updates to the Tool were dev…