What are all the Enabled State and Visible State options when mapping Automation Commands? 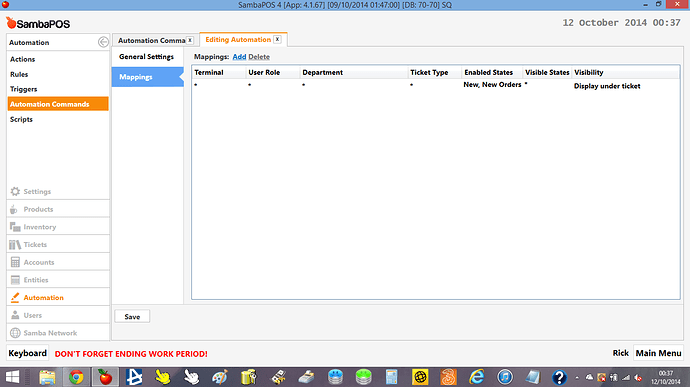 Its not restricted to just states you define in Setting/States it will work with any states defined in rules but not entered in Settings as well.

We have full control over states. what they are, when they are changed… EVERYTHING so there are no hidden states. Just try out some thats in Settings/states then look through your rules for any states not defined in settings… you can use any of those states.

What i want to do is have some buttons removed from one state, is that possible or can we only lists the states we want the buttons visible?

For example i want the following buttons visible all the time 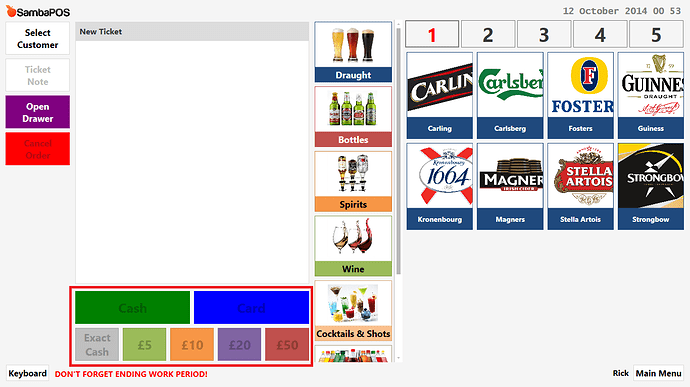 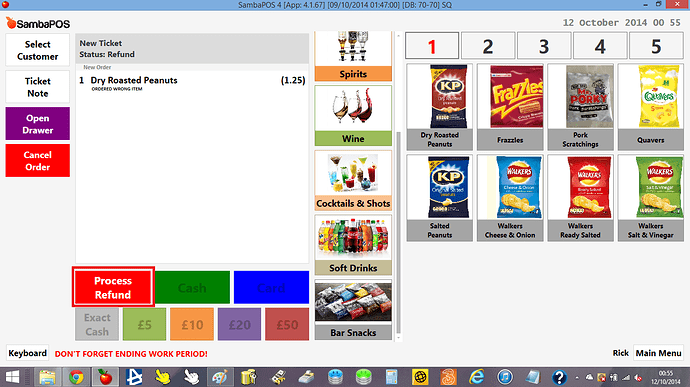 I can do this if i just set the mapping on the payment buttons enabled and visible states to New and New Orders, however when logging into the POS the buttons dont show until an item is added to the ticket.

So I either need to know what the state is when you first log into the POS and the ticket is empty/nothing has been added yet so i can add this state or a way to just stop these buttons showing on my refund state?

EDIT: ive also tried setting ticket type to refund but that doesnt have any effect

You can use states to hide buttons yes.

The states are located in Settings/States as well as any rule that has Update Entity State, Update Ticket State, or Update Order State action in them. You will find states there as well.

I am not giving you a direct answer because before you start doing this you need to understand states… or you will break your system. PLus your states may be different than mine.

Because you have states that also relate to a fully settled ticket (isClosed, etc), * is good for states of an open ticket, but when you need to deal with isClosed tickets too, leaving the state blank works better instead of *,isClosed

This came from a short discussion regarding the Close Button, here…

I used to have the CLOSE TICKET button enabled, but now seems to be disabled when entering into ticket view mode from ticket display screen… [image] [image] [image] Any help would be appreciated!!! THANKS!!! g.

When dealing with states I am pretty sure * does not mean all states. Also just because you have a State check in there… does not mean the action is accessible. Open ticket with no entity for example will not close. This is driven by states as well…

Off topic a little but I have a little challenge I plan to work on and its deleting the entire setup and building one from scratch states and all. Just to see if I can do a 100% custom SambaPOS configuration.

There is also a Tutorial by @emre here:

What does State mean? V4 Tutorial

Basically this is what i want to do, ive changed my payment button mappings to “New, New Orders” 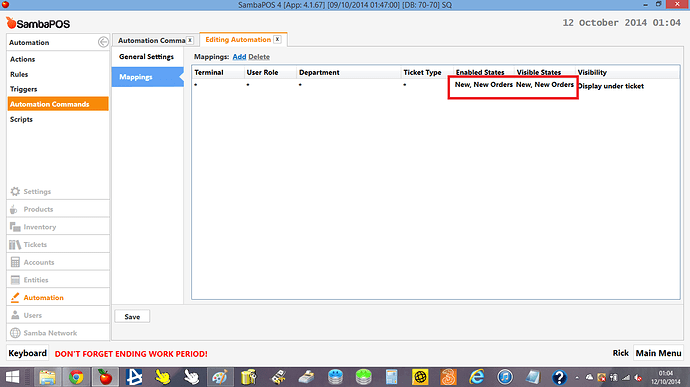 and my process refund button as “Refund” 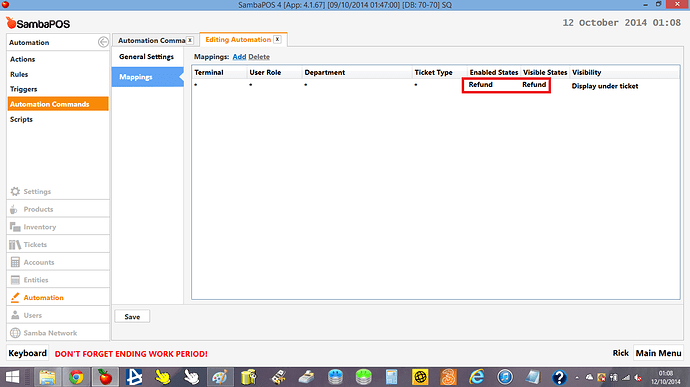 This gives the following results: 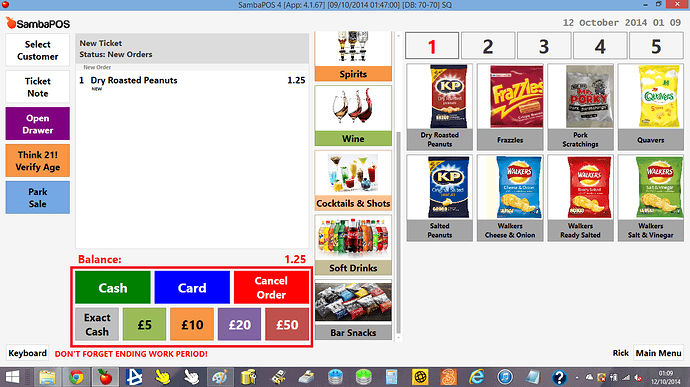 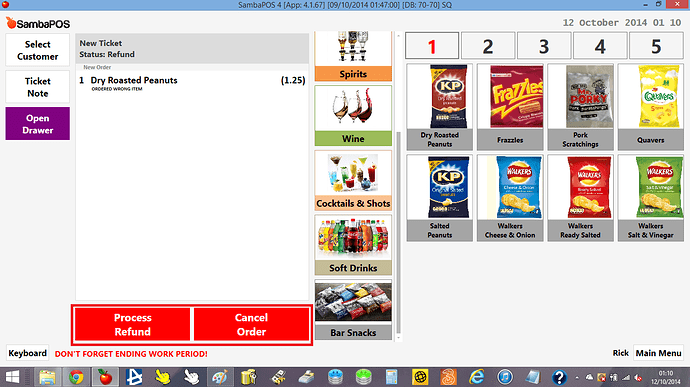 The two above screen shots are how i want them to appear, however as i have set the payment buttons to only show on “New, New Orders” when you log into the POS the screen looks like this until an item is added to the ticket: 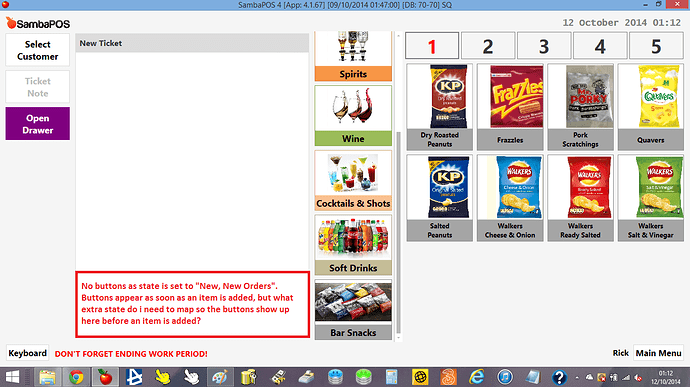 So what is that state called when the POS has been opened but nothing has been entered onto the ticket yet? when the mapping is set as * or blank all the buttons show, but then they also show when i dont want them to on my refund mapping state

I basically want to add another state to “New, New Orders” so that the buttons show when entering the POS screen, if this is possible to be set as its own mapping state??

To do this you would type Status=Refund for your payment processed Rule… for your buttons you want hidden you type Status=New,Status=New Orders

however as i have set the payment buttons to only show on “New, New Orders” when you log into the POS the screen looks like this until an item is added to the ticket:

This is ok… you have nothing to pay for yet anyway… but if you want them to show here as well you need to move Refund to a new State Type… instead of Status use RStatus then you can just put Status= for your payment buttons and RStatus=for your refund button.

NONO Not what I was saying read entire post.

Really you should read about States thoroughly its hard to understand until you have read it over and over and trial and error to see how they interact.

So you do not want to go and start changing states of current group codes without knowing how it might affect the rest of your flow… study your rules and state flow… make sure you understand how its working then you can manipulate it.

sorry seen the rest of your post now lol, ill have a go at that thanks

Thanks for your help, ive sorted it i didnt add the group code to my refund state so now when using Status= its all working

Was there ever a verdict as to what enabled/visible states mapping of * actually meant.
Just found myself stuck in a paid/closed ticket opened via the ticket lister with my close ticket button was set * for both it seemed to be visible but disabled…
After trying many combinations found black seemed for both left my logout button available in all situations…
Not sure what the default close button mapping is as have removed its mapping for my own LOGOUT button, but were they blank for the default close button?

My installations are showing Blank for Enabled and * for Visible.

I have added a button to the POS screen that I only want visible when a Customer has been selected on the ticket.

Can I just add something to the mapping for visible state, and if so, what?

You’ll notice states giving a lot of flexibility so you can update a specific state when an entity selected, removed, a drink added, bill printed, discount made and update related command buttons accordingly.