Ok, taken an all in one as part ex on till system.
Just deciding wether to just stick on eBay as is or switch to samba.
Has IRCTouch on it at the moment.
Not sure if I’m mean enough to subject someone to working this out. 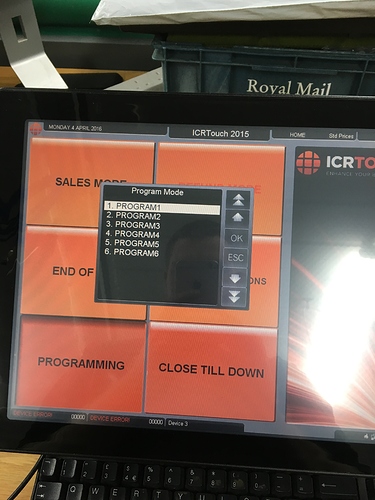 WTF!!! Why not just call them that LOL

And people think SambaPOS is hard to understand?
I’d rather go back to writing prod names on a sheet of paper to put under the rubber cover LOL

Product names and prices are on two seperate programming modes!

just the one mind.

Clean screen button.
Asks for number of seconds and fills screen with popup for that time so can clean screen without pressing anything.

I do notice that it is in fact ICRTouch 2015 so it should be really amazing!

Not got the printers plugged in 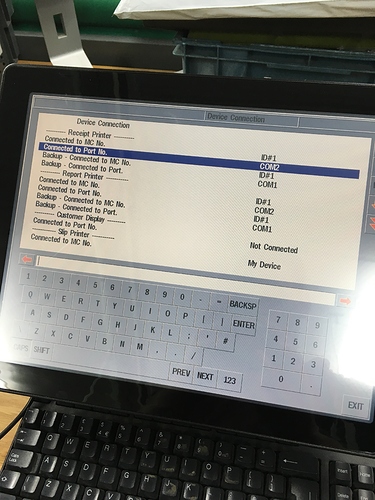 Think might just put on eBay as is, is a tidy all in one but only pos2009

I have one of those on my system, but for some reason the button has a “Power” label / indicator on it (on the monitor)

I have one of those on my system, but for some reason the button has a “Power” label / indicator on it (on the monitor)

very true, I do have one of those as well LOL
I usually just clean on the login screen, chances of logging in with the 10 digit rfid number are pretty slim lol

My point was I thought it was a nice touch, although the programming menu structure is very very very poor and the POS screens always look hideously complicated even if you have a simple menu.

My eyes hurt after looking at that software…

WTF!!! Why not just call them that LOL

This is to justify paying lots of $$$ for the system and for support, because it’s too damn difficult for the customer to update themselves

Probably they had a meeting one day and decided to leave it (make it?) like that for that very reason!

I reckon we should do some POS comparisons and see how they differ and match against Samba. it could help to underline the differences between other pos software and samba, and it may even help trigger some things that others have that could make samba even better? :D(Not that it really needs any more :P)

I dumped ICR after they wanted me to buy a new licence for new hardware (a power failure took out the old one). Your ICR licence is tied to the hardware…

ICR easy to use give me a shout if you need any help JTR. Nickexmoor1 send me your licence details and I will sort you a release code for new hardware.

ICR easy to use give me a shout if you need any help JTR.

Thanks, I have sussed out most of what I need which was just to take the business details off the receipt etc and ‘disconnect’ the kitchen printer to stop the error message.

What I would be interested is a method of clearing the transaction history.

On a separate question do you know what a licence for ICR is worth?
Was just about to list it as is but if dongle can be sold seperatly ‘unlocked from hardware’, I might reinstall the machine and sell with Samba as can offer some form of support for the buyer VS ICR which iI have little knowledge about.

Your best bet would be to sell it as it is licences can only be reset to pair to new hardware this is done online. What model is the hardware.

To reset sales data go to programing and type 88888888 as password for admin items.

Perfect, thanks, would I be better to do a full reset of just leave the existing products on?

I like to start with a clean sheet but will probably be easier for you to just change whats there.

Don`t take this the wrong way as I like to use samba pos but If you remove the ICR software you will reduce the resale value of the system.

Thanks, am selling as is with just receipt name changed and sales data reset.

Thanks for the tips

Realistically if you list it around £650 it should sell.

Realistically if you list it around £650 it should sell.

You can barter down not up

Am just basing it on the other listings at least £900 under cutting at £850, one listing is used with drawer, printer and software for £1200+ LOL - although that’s inc 6 month warantee (Is this where you say that’s your listing?

)
£595 is my usual separates samba system ebay price with average sell price of £500-£550, last all in one I sold went for £650 which was a older ELO one, £850 would be stake dinner tonight, will obviously accept less and just go to the pub