With and without buttons for toppings

For my pizza section I’ve got about 30 toppings. I can create an order tag group in order to add extra toppings and charge for it. But very often customers want it without a topping. I can create a tag again with name NO topping. The problem is that now I’ve got 60 toppings on the screen and looks messy.

Also, some times a customer asks to deduct 2toppings and add something else. I don’t like to charge him for the extra topping from the moment he has deducted 2toppings.

Thank you in advance

Om I’ve just seen the prefix option in the tag…

Any idea about No adding prices on without?

So your including the price of toppings in the pizza BEFORE you select any order tags?

The best approach to this is to configure the pizza with NO toppings… configure all your toppings as order tags and put the prices for each topping into each order tag. If you want default toppings then set those order tags to apply automatically. If you take one of the auto selected tags off the price is taken off.

We can help you better if you provide a screenshot of your order tags… so we know how you have it setup and we can recommend a setup for you. Most people get confused with order tags at first but its hard for us to help you if we do not know exactly how you set them up.

EDIT: I see the most issues is when people setup pizza with order tags… Maybe we should make a tutorial for setting up basic pizza shop with order tags

EDIT: Just wanted to point out the biggest mistake most people make when setting up pizza shop is they use menu items for toppings and they set the pizza with menu group name. The best method is to create pizza category, then pizza sizes with menu items… let order tags do ALL of the toppings including prices for toppings.

well… I have got a Pizza Called Marinara

my customer doesnt want spinach on marinara, so I press NO and i choose spinach.
But he wants Mushrooms, so I press ADD and i click on mushrooms. Problem is that I cant charge mushrooms now. If I set a price then it will come up when I press NO 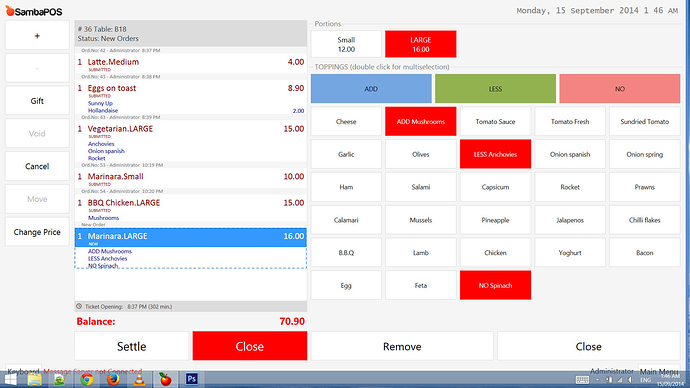 Your making it too complicated. Why do you have to tell it No Spinach? If you do not select spinach it would be understand there is no spinach on it.

IF pizza Marinara comes with spinach by default… then what you do is you put fixed order tags on it in the Menu Item Properties… So when you select that pizza it auto selects spinach for example… if customer does not want spinach you just remove spinach order tag you do not need to tell it No Spinach.

I will give you an example. I need to build pizza so give me a few minutes.

These customers are getting very complicated today…

Becasue My marinara has spinach on it…

I dont make the pizza on the fly… i give them the menu with about 15 pizzas. They choose… Marinara, but their stomach doesnt accept the spinach… so they want a Marinara without spinach

Your not getting what I am saying…You can still have pizza with spinach by default… but the way you do it is with order tags… NOT understood spinach on it. Let me show you give me a few minutes to build it.

This is what my customers see in my menu 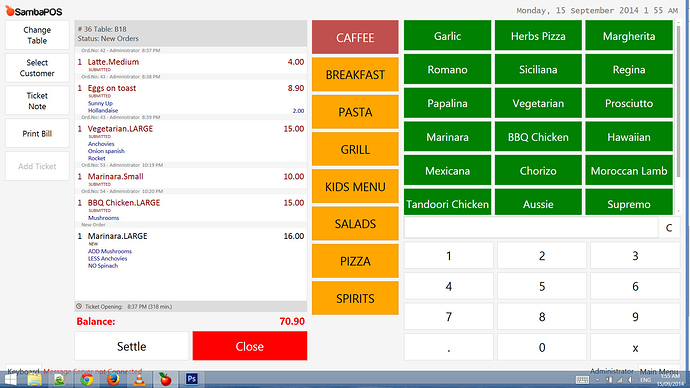 So, they choose to not have spinach on it… I have to enter that in the POS. How do you reckon to send the ticket with information NO spinach… Notes will be very time consuming

But another customer wants a Margareta with mushrooms…

This is what I made for Breakfast, But for Pizza it will be a total mess thanks to the number of toppings. 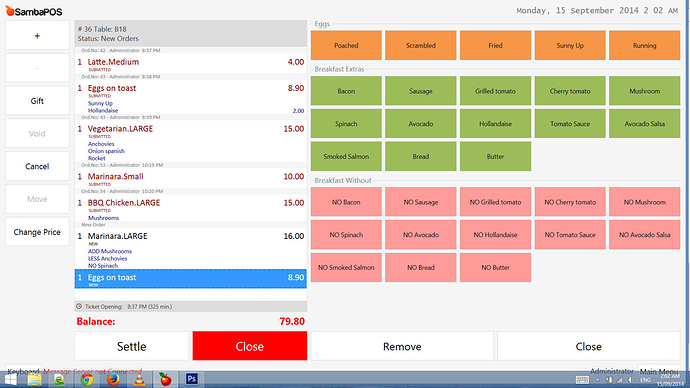 @Powerstorm try creating a new order tag called ADD Mushrooms and set a price for it. 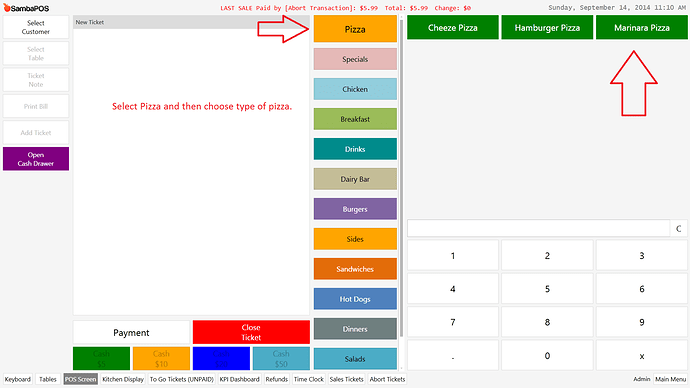 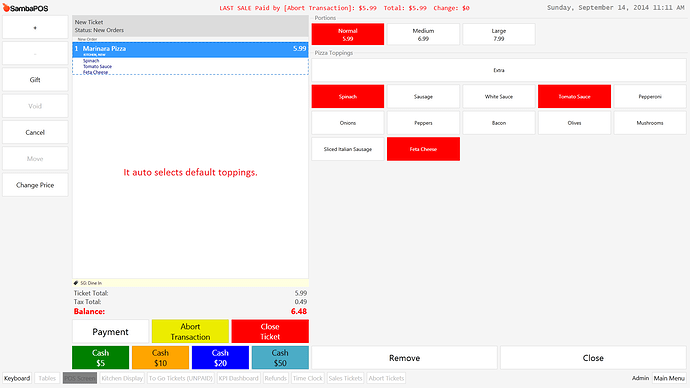 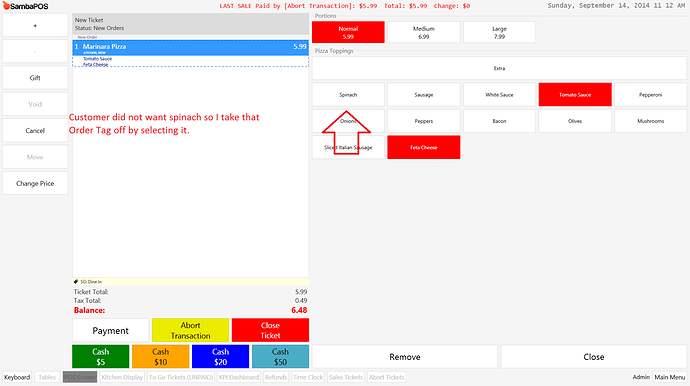 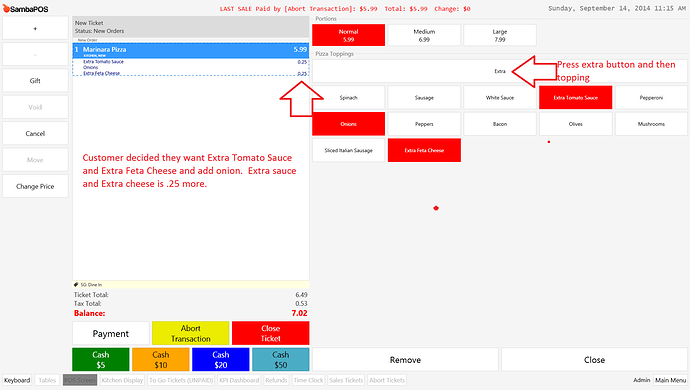 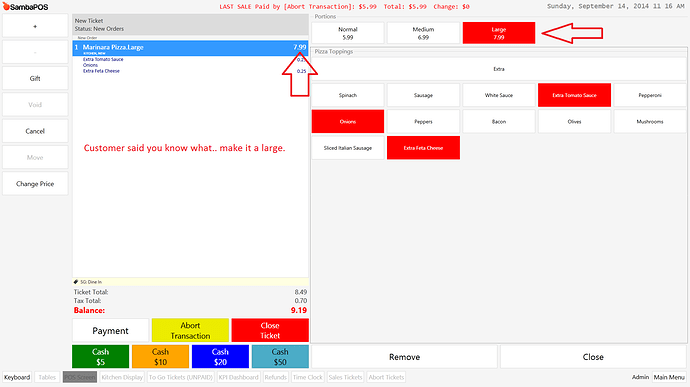 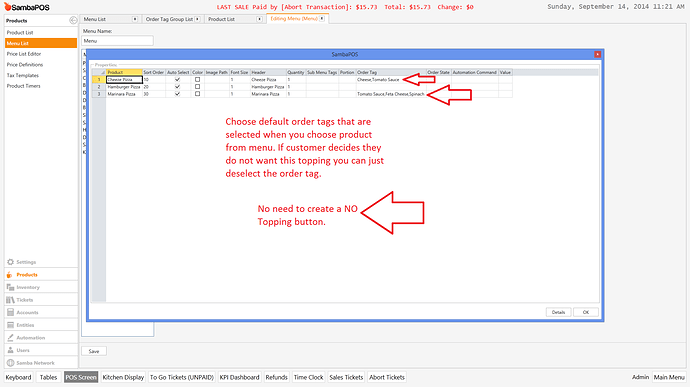 @Jesse I’m fan of your method as staff does not need to remember default pizza toppings. I know some big pizza chains always lists all toppings in kitchen prints so it makes easier to train new staff. It is also easier for operator to remember what that pizza contains when customer asks. In some cases customer says “I don’t want onion” even that pizza does not contain onion. That sometimes confuses kitchen.

However some venues prefers just mentioning non-default values as it better visualizes Marinara won’t contain spinach. It relates with how cook better gets it

Thanks for your time, but I really need to create a NO button for pizza and for the kitchen

My pizza chef knows the incredients for pizzas. I send additional info only if there is a reason. Otherwise he wastes time by reading tickets. Can you imagine if i send him a Special pizza (6 incredients) +something -something? He will read an essay and will try to figure out what is going on.

I dont have to tell him to put prawns on marinara… he puts them anyway.

PS: I will use your tutorial for cocktails… Not all bar staff knows the incredients for drinks.

Wouldnt he have to read ticket to see a No Modifier? anyway… I see your point. If you need a No Button then Make a prefix that says “No” then make order tags as following… Spinach with your price… then No Spinach with 0 for price. Put No Spinach sorted below spinach… When you press No Modifier and then spinach it will put No Spinach on ticket with 0 price.

You can make a prefix for Extra and make an Extra Spinach order tag with the price.

My question is how would you handle a custom pizza then? And what if someone modifies a Margarita pizza and adds a bunch of stuff… I would think it would be more confusing if you didnt have everything customer wanted… but you may have a system that works I can respect that.

In other words what i made on the screenshot for breakfast.

Is there a way to alter screens by buttons? For example, I press a button ADD EXTRAS and then a new screen with toppings come up. Same thing with a button WITHOUT

You should use a prefix for No. Let me show you.

I know… i saw later the prefixes…

But that would be killing feature coz you get a tidy screen. Most pos systems offer “with” and “without” buttons that include everything pizza, kitchen, coffee on the same screen

is there any way to make an automation? to read the price of the toping but if the state is NO then price is zero.

Just let me show you. I have to build it first.