This tutorial will show you how to make a basic Abort Transaction button to put on your POS screen in the event you need to abort an entire transaction with a single button press before it is settled.

Database Tools Module Import File: For those of you with the Database Tools module purchased and installed.
You will still need to update Ticket Closing rule as described in the tutorial below.

Items are added to the ticket but before you settle the customer decides they do not want anything. So you press the Abort Transaction Button: 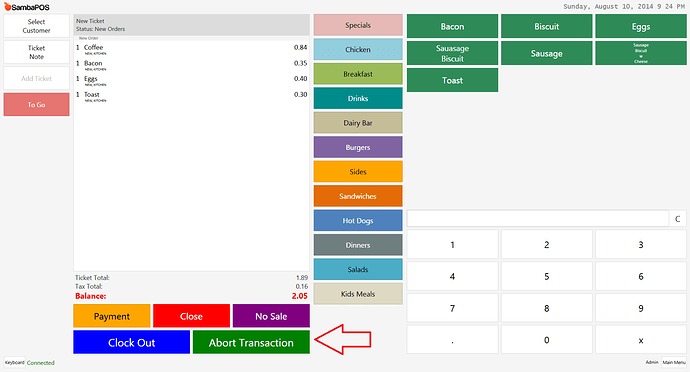 After the button is pressed it changes every item to zero quantity and updates the display status to Aborted: 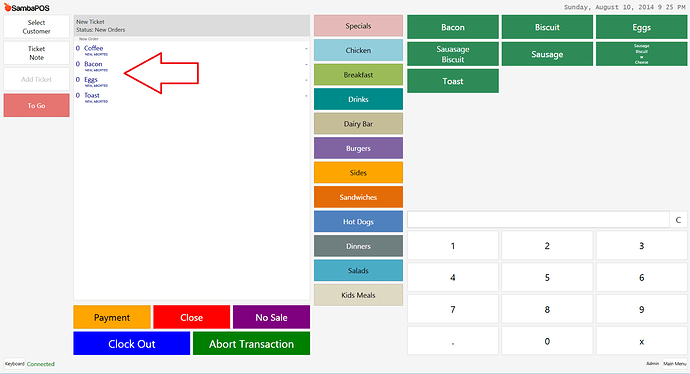 The ticket is automatically closed and a new ticket loaded ready for the next order. 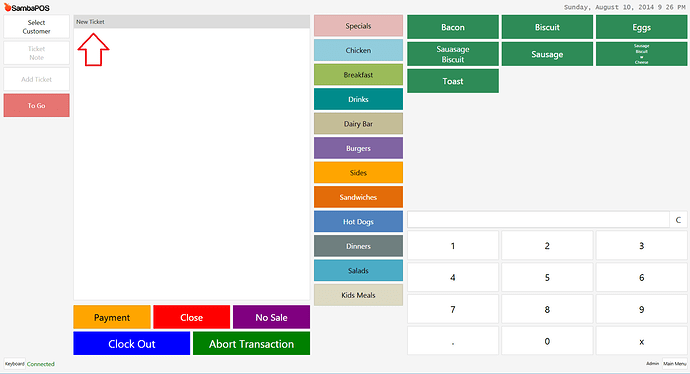 You can now view all aborted transactions from the Ticket Lister: 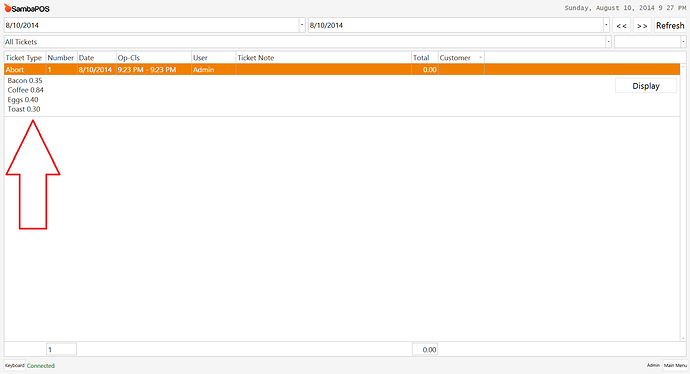 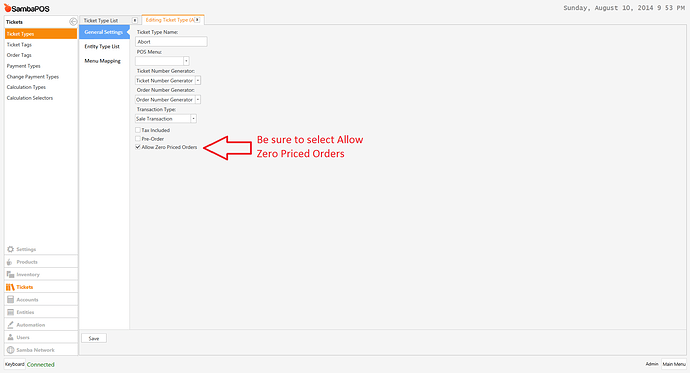 Map it to where you want it to show on your POS screen. I use Display Under Ticket Row 2 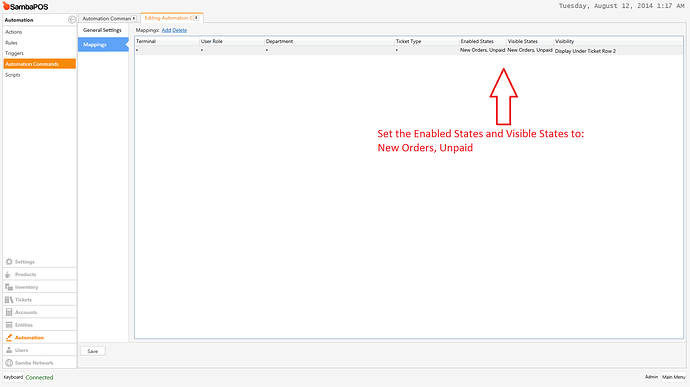 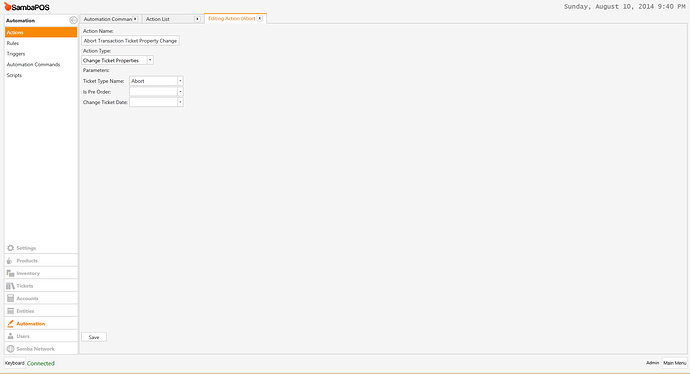 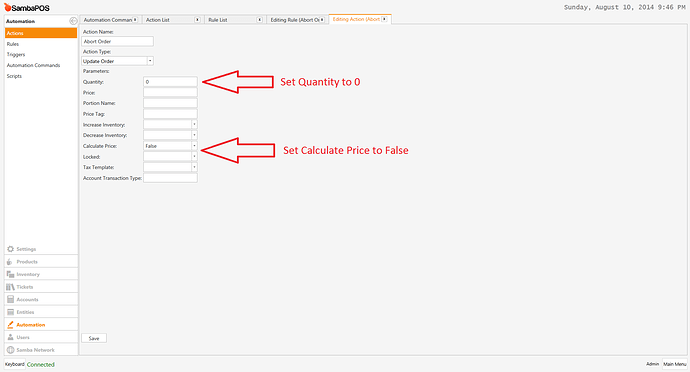 Create an Automation Command Executed rule:
Put the two actions you just made in the rule and include a Close Ticket action 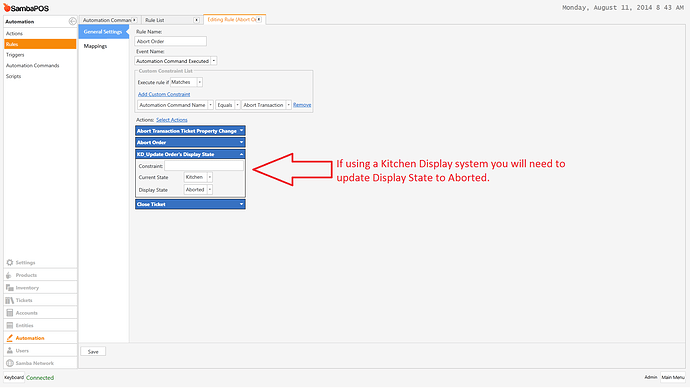 Open the Ticket Closing rule and add the following Constraint: 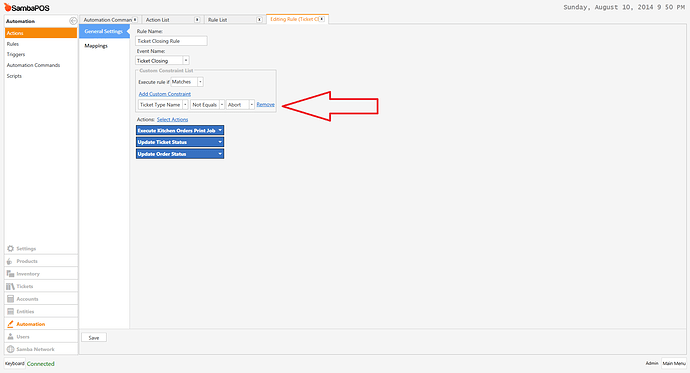 So you dont have to manually click the close button after youve pressed abort ive added the close ticket function to my abort button so when its press the ticket is cleared AND closed, leaving you ready to carry on with another transaction

Great IDEA! I added it to the tutorial as well as instructions to be sure and enable confirmation so you prevent accidentally pressing it or require manager/admin override.

I got this errror when trying to import the script. Please help to fix it. 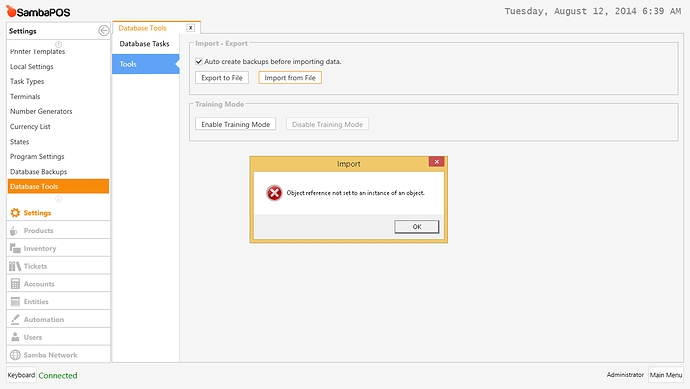 What version of Samba are you running? I generated the file in the latest 4.1.47

I did find a small issue with using this. If your department is set to Select Entity as your Ticket Creation Method when you add items to the ticket it will keep the last item you added selected and if you hit the Abort Transaction button it will only abort the selected item.

I am going to try and find an automated approach around this issue but until I can all you have to do is ensure you press your settle key once or touch/mouse click the item to deselect it… It will not settle the ticket but it takes it back to no items selected. Then you can press abort transaction and it will abort all the items.

If your Department is set to Create Ticket as your Ticket Creation Method then it works as advertised no modifying required.

i’m using 4.1.47.
If i want to manual edit the scrip file then which editor is best for it?

If you cant get it to work then just follow the tutorial and manually make it. The file is just a text file…

Did you try extract it out of the zip and imported the txt file not the zip File? Shouldn’t make a difference really.

After import the text file it generate this error. I can use the Abort transaction button. But i’m not sure if all the script was added or not.

Emre that may be it… I left that out because not everyone uses the kitchen display. Maybe I should modify mine to exclude the KD and re-upload a more generic one. I didnt even realize it was still in there I will fix it now and link the correct file.

The updated file is linked. Download it again and try it now. I think it should work. Sorry about that. I was originally going to include the Kitchen display action change… but then I thought not everyone has one furthermore not everyone has the same display setup… So i meant to exclude it and only show it in the screenshot. I forgot to exclude the action from the rule before I exported

Also until I can figure out a workaround you have to make sure any currently selected items are deselected before you hit the button. Or it will only abort the selected item not all items and close the ticket.

@Jesse I’ve quickly implemented something for it. It will appear when such issues detected. We can skip it by clicking OK button or Cancel export. 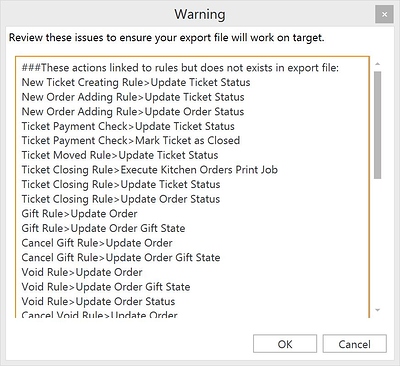 Awesome that will make it less of a headache when packaging these type of compilations. Especially for anything with a very complex set of rules/actions.

Please let me know if you notice something that should be checked.

I know it is a minor thing and really not something worth taking resources towards unless its an easy solution… but the only hurdle I have with this method of making an Abort button is the fact that it Auto Selects the item on the screen when you add it to the ticket and if you don’t deselect the item the abort button only aborts the selected item.

I know why it does that and it should… but would it be possible to disable that function with a constraint for instances like using the abort setup in this tutorial.

Just edited the tutorial: I tweaked it a little to make the Button only visible on New Orders and Unpaid states. You should never use this button on a Paid ticket so by setting these states it removes the button from the ticket lister if you use the Re-Open ticket option.

The Database Tools file is updated as well.