Is there a way to add a Print button between Merge Tickets and Close. I am not sure if it is possible with current setup.

After splitting a large Ticket, we can use Print button to print Tickets that are selected above. This will speed up printing multiple small tickets. 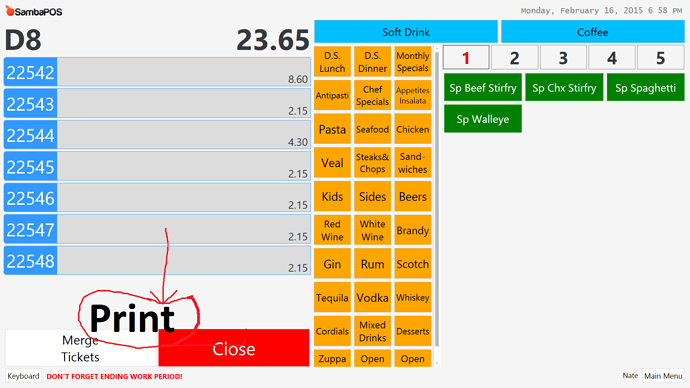 Interesting idea. We don’t have access to that screen to place our own commands.

I was wrong. This is how to do it…

Here is the setup - minimal, easy, seems to work well…

This method should work too, in a similar fashion…

To Print multiple Tickets, you could try to use a Ticket Lister Widget and an Automation Command to fire the Execute Print Job Action.

We do have access to put buttons there, on your button mapping select “Ticket List” on the visibility option 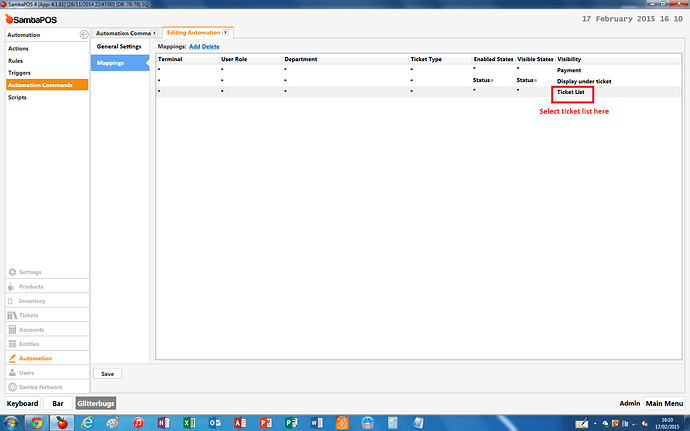 And it appears here 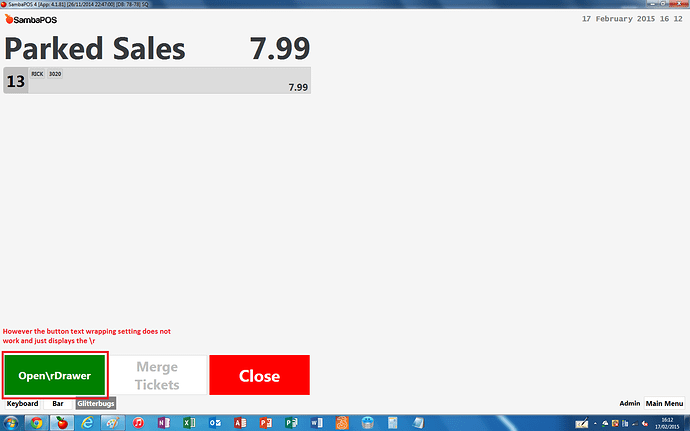 Nice @RickH… wasn’t aware of that!

Ive not tried it, ill map my abort transaction button later and see if i can select multiple orders and abort them all in one go

I am learning something every day about SambaPOS and that’s the reason I asked if it is possible with current setup. It seems SambaPOS can do almost anything as long as you know what you are doing.

@RickH, can you try a Print button to see if it will print selected tickets.

Need to find a way to load Ticket IDs … 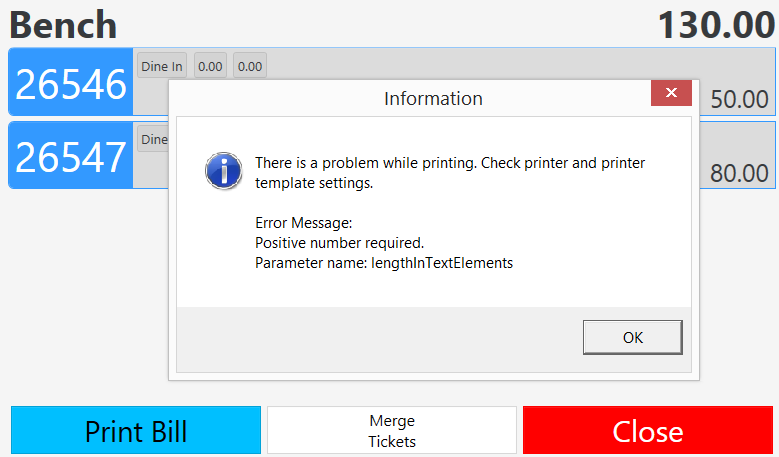 just tried my cancel transaction button and that doesnt work either, the ticket has to actually be open on screen for it to cancel, you cant select one order or multiple orders

@QMcKay With your print bill can you select one order and then press the button, or does that not work either?

It is probably a fairly simple setup - just missing something.

I think we need to use Load Ticket Action, then Print, then cycle to next Ticket (Loop Values Action?). I’m almost certain there is a way to do this without too much trouble; but I need to do some research.

Loop through all tickets V4 Question

Hello everyone, I was wondering if SambaPOS is giving me the ability to use Loop Values Action Type in order to loop through all Unpaid tickets and then using the Value Looped Rule to update one ticket Tag. I have been trying it this way with no success but there is a high possibility that i have been using the variables wrong as I am not so sure that I completely understand SambaPOS Database Schema. So the USE CASE is: Automation Command (from custom entity screen for instance) -> Loop Thro…

Is there a way to implement a Print button as per above request? I think, it will enhance printing when we split tickets.

Read the linked threads. Look at this, the Message is showing Ticket Ids, comma-separated. And they do print. 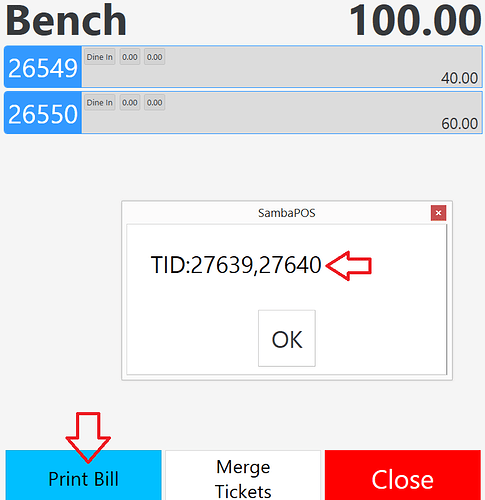 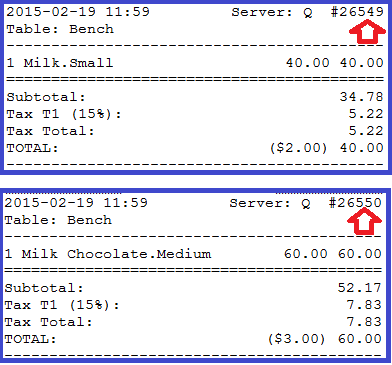 Here is the setup - minimal, easy, seems to work well… 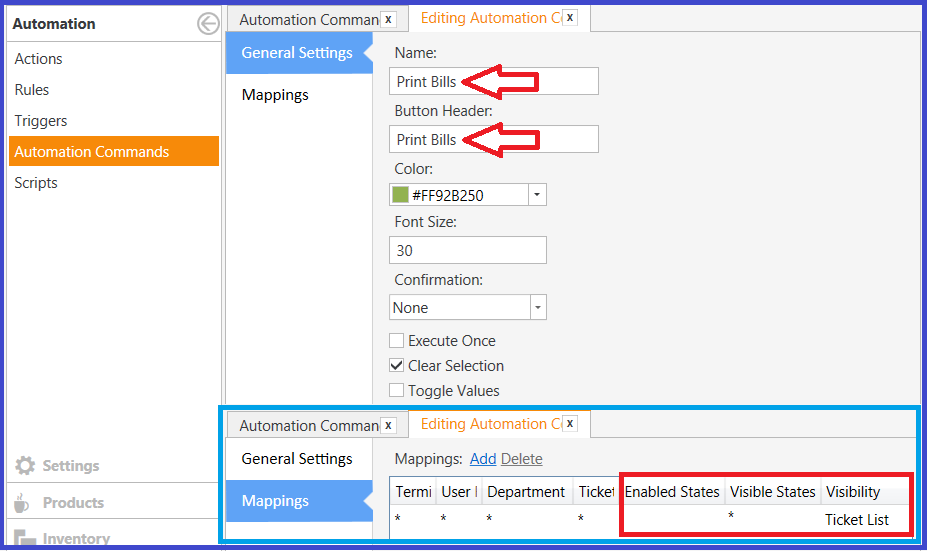 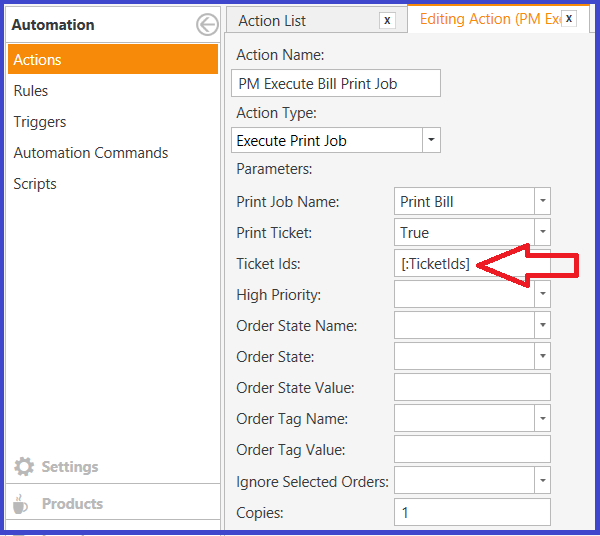 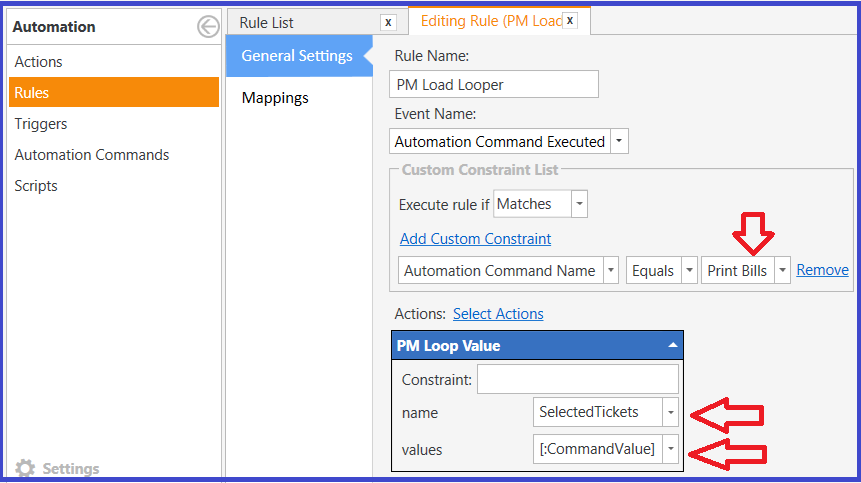 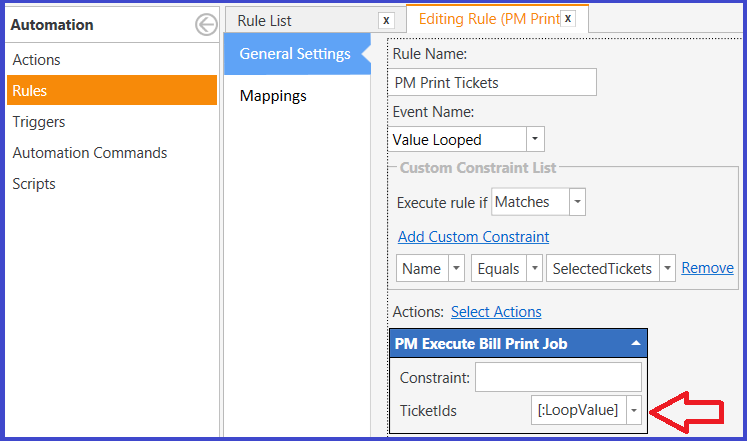 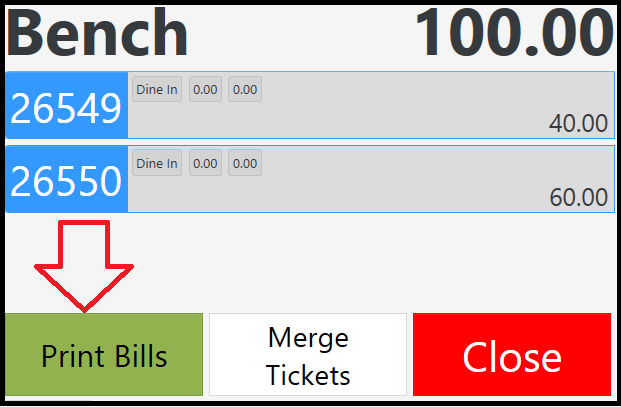 Thank you very much. You are always tremendous help in this forum.

thank you @QMcKay. It worked flawlessly. Is there any reason we should be setting map values for Rules: PM Load Looper or PM Print Tickets?

All rules need mapping with no mapping rules will not work. We often do not mention mapping for rules because well its been said so many times it should be common knowledge.

You will be happy to know when v5 comes out rules will include default mapping.

Makes sense, but for people new to SambaPOS (i.e. me) it can be confusing. I did map those rules from default, but wanted to clarify. Thanks.

Yes it can be confusing we agree that’s why we pushed to get default mapping when creating rules in v5.

I’ve followed this and it works great… Only thing is I tried to get it to lock the tickets and change the states… But its not working and I know its because samba doesn’t know what ticket to do it to… Just not exactly sure how to tell it… Any pointers?