Set a birthday that’s within limit. Does not matter if its his or not. Specify all waiters use same one for these cases and you can track its use.

Make it do whatever behavior you want… move the Age verification to start from automation command executed instead of order added… and put an ask question on the order added… Question can say, Does customer look like they are over 40? Yes button would bypass the birthday check but still confirm… no button would initiate the age check. Can use the same constraints looking for confirmed status or unconfirmed for the question to be fired.

I just implemented this and added the Ask Question modification and it works great! Very good solution @emre thank you for making it possible. It also gave me some great ideas for more stuff I am working on.

PS Love where the custom reports are going. It just feels more natural to create them with the built in syntax vs using sql scripting.

I do not know if its good or bad or neither… but I was looking for a way to disable age check until I carry alcohol. I can just delete rule mapping… but I thought I will just delete the custom product tag… items not tagged it wont trigger anything… I deleted it… products show no tag… yet they all still trigger the age check… So looks like its not clearing the tag off the items in the database?

PS Just checked database… and I was right the tags are still there even though I deleted the Tag and it is not showing it on the products.

I figured… I will just delete the mappings.

I will but its really exactly like I said few posts up. I’m not at home i’m at restaurant and on my phone. So will be a while before I can share it.

Hey @RickH did you get this figured out? I have been busy I almost forgot about this.

If youve still got time to show me thatd be great!

Its really simple and you will do a forehead slap when you see it haha. Yes I will show you give me a bit.

Go to your Order Added rule Clone it and convert the clone to this: 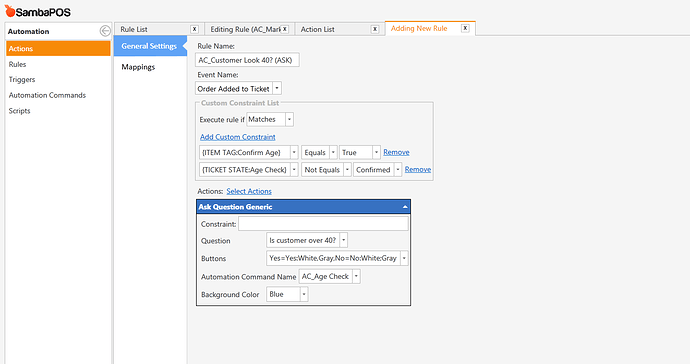 GO to the original Order Added Rule and change it as follows: 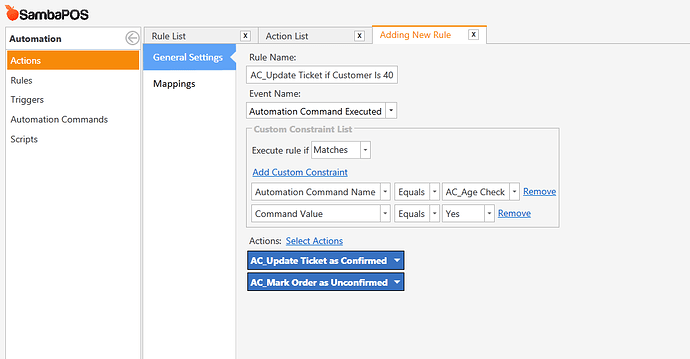 You need to make an ask question action. I made a generic one that uses all variables so I do not have to make a new action every time I want to use ask question. You can do the same or you can make one specific to your Age Check… just be sure it is setup like screenshot shows.

EDIT: Just noticed IGNORE my action that says Mark order as unconfirmed… its really markikng it confirmed I made that action use a variable instead of hardcoded… I just did not rename the action yet. So if your using two actions like original tutorial shows… then just put mark Order as Confirmed there.

EDIT: Spotted another small typo… First screenshot for buttons defined in ask question I made a mistake defining the colors of Yes… it should say White;Gray not White,Gray

Let us know if you have any issues.

Spot on! Thank You

Im now going to try and add another question so that when id is required and has been seen i can select the type of ID seen e.g. driving licence, valid ID card etc

The setup you explained for me when a customer is clearly old enough and we dont need to see ID works perfectly, this is the issue im having trying to add an ask question for type of ID seen:

When an age restricted item is added to the ticket the “new” message box appears asking if an age check is required. When I select NO (as the customer is clearly old enough) the sale continues and the ticket is marked with “Age Verification: Confirmed - Proof of ID not Needed” as shown below 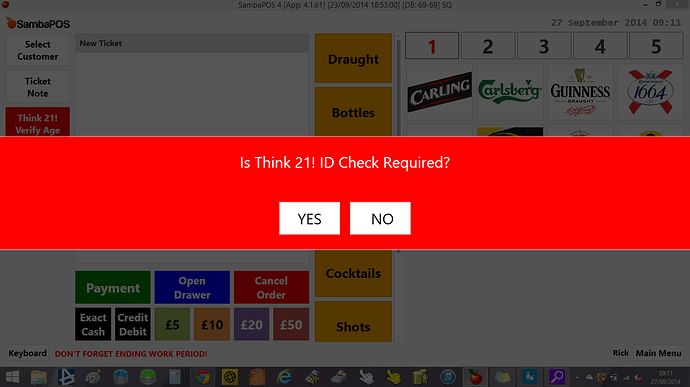 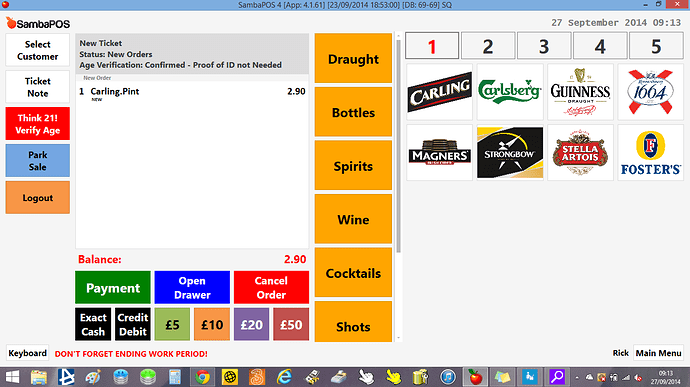 Now for my issue
When the message appears asking if ID is required and i select YES, i then want another message to appear FIRST asking what type of ID has been seen eg Driving licence, ID Card etc with ticket tags added to say what ID has been seen (like when selecting card type and entering last 4 digits) THEN i want the keypad to appear asking to enter Date of Birth from the ID that has just been seen. 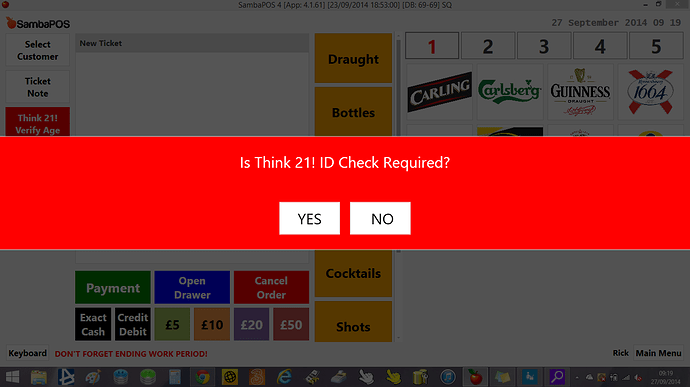 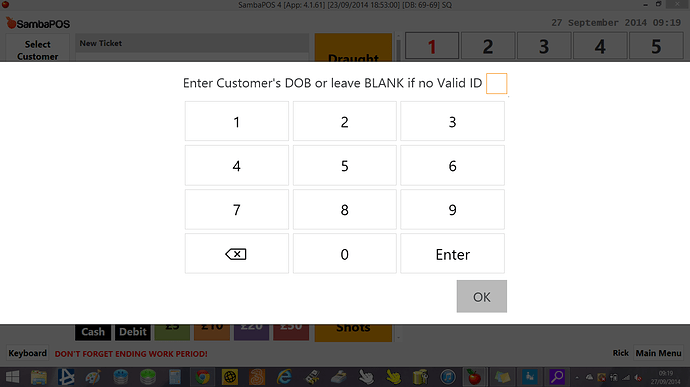 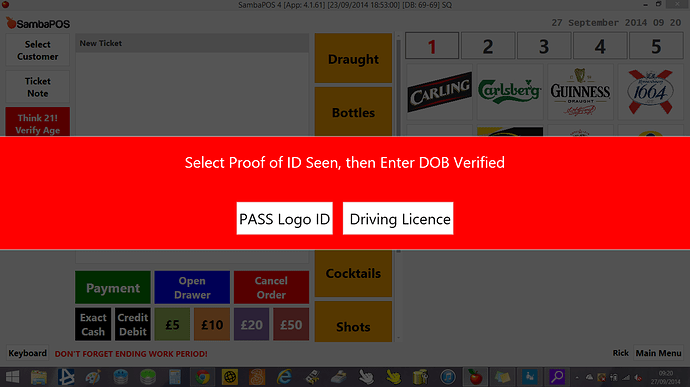 Do you really need to record that? Seems like an extra step to me for something that would be understood.

yea i give in ill scrap that idea im making things too complicated, could you help me with this:

Currently the popup message asks if id needs to be seen, answer yes or no. When answering yes the enter birthday keypad appears and ticket and order tags update then for every item after the first that is entered the birthday keypad no longer appears as it has already been verified, this is perfect.

this is my issue, since cloning the action and changing the state to show on the order and ticket the message asking does ID need to be seen is appearing after every single item i add to the ticket. If i change the actions back to the original ticket and order state actions the message asking for ID only appears when entering the first item and not again. How do i get my new actions to work with only having the ask ID message appearing after the first item and not every single one, have i missed a setting somewhere when cloning my to actions?

When your dealing with states… you must remember they are States… not just tags… rules built around what State an order, entity, or ticket are in. Your rule that checks if No was pressed… is checking a state to execute… you have changed that state…

Slow down and think it through… if you changed the state… and the rule that asks the question is looking for a state… what should you do?

PS. I didnt really mean your making it too complicated (Although I would Agree with you that it is). What I meant to say was why ask 2 questions… you can do it with 1. instead of having yes or no… you have Check Drivers LIscense or Check BLAH ID and a No button. You then redo your command value constraint to trigger the tags accordingly