Hi there,
I am new to SambaPOS and need to add an auto time out function for users when they walk away from the laptop, say after 60 secs.
Is there a complete tutorial available for dummies like me with step by step guidelines?
I hope you can help.
Tammy

There is a complete search function that, if used, you would have found your answer…

Not really impressed. And YES I had searched and looked at what you have highlighted but where to from there? I was expecting a tutorial with screen shots of how to set the rules and actions up. All I see is a bunch of dialogue and questions from others. Is there an English User Manual I can refer to?
If you could assist I would greatly appreciate it. Thank you.

As samba is so customisable there’s isnt a manual, the forum really is the only “manual”

This software isn’t like others where there’s a manual to read, its all based on users of the forum posting their setups and ideas and creating their own tutorials

To auto logout after so many seconds could probably be created with automation but you would need it to set a ticket tag, which would then allow the ticket to close and the logout action to fire. But like I say it would only work from the ticket screen and nowhere else

I clicked on that tutorial and it clearly has screenshot and very detailed instructions by QMcKay as well as a wealth of discussion that contains more ideas to try. Your going to have to work a little and read. Besides I don’t think he was trying to impress you.

If you need someone to build a custom solution for you make a post in the ADs category. There are a few of us that charge for those services.

Thank you for your patience and explaining there is no user manual.
I will try and do as you suggest but this is a great pity for the product because even though the licence may be inexpensive the amount of time and effort to make the configuration changes can quickly escalate. This means the ongoing costs to maintain the SambaPOS once it has been implemented are high.

This means the ongoing costs to maintain the SambaPOS once it has been implemented are high.

I disagree it is significantly below the market standard for POS systems in terms of cost.

I charge $500 for basic setup and $250/ hour for advanced custom configuration.

Most pos systems are upwards of $300-$1000 per month for what sambapos can do in multi terminal environments.

SambaPOS may take time to fully get to grips with but this is the point of Samba - that you can customise the setup to your needs. It is not a cheap plug and play solution.
You are best to spend the time to understand the system to best take advantage of the flexability.
If you want a plug and play solution with simple tick box setup then your in the wrong place and better going for a hardcoded solution where you can only do what the developer has setup and not make your own custom flows.

If your new to Samba I sujest you spend some time on basic stuff to get to grips with its automation system.
I have done several step by step video tutorials for things like fast cash and show change messages which are great learning tools as I go through the steps and try to explain whats happening.

Ok thank you I’m getting the drift.

Great kendash, thank you I will look into the detailed instructions provided by QMcKay. Yes obviously I’ve lots of valuable learning experience coming up.
Will give it a crack shortly.

You could compare samba to wordpress. For designing websites you have options like wix or godady builder which are very simple to use WYSIWYG systems to have your site up and running quickly but you are limited on the abilities and flexability if you start delving deeper.
Wordpress is between this and completly coding your own website. It requires more knolage and experiance to use effectivly, you can have very simple basic site ready pretty quickly but you need to add plugins and configure stuff to get it working more specificly how you want it.
Samba sits one step on from that and while it does not have an abundance of ‘plugins’ like wordpress - like wordpress it has hooks and filters which allow you to create completly custom setup to suite your needs, what is good about samba is you do this more advanced customisation using a more user friendly user interface of rules and actions and dont have to know much code stuff to begin to get very custom setup.
It then also allows you to do scripts etc and get even more detailed and complex if you know java/jscript you then open up in to a whole new level of customisation.

In early days it can seem very daunting and it will take some time to get to grips with it but if you invest some extra time in the begining you wont regret it when you have a system completly customised to suite your needs.
As an example I have setup an intergration for the group of hotels I work days at which links the POS to their property managment system which syncs rooms/booking and all sales information. This project took me several months of late nights to complete as was quite complex but it demonstraints the power and flexability of samba (plus I had to learn java/jscript and SQL n the process as had not used thes code types before which obviously made the project take longer than it would have if I did something like that again now)

Brilliant ! Hey JTRTech,
These videos will be fabulous to come to grips with how SambaPOS works.
Exactly the kind of help and assistance I was hoping existed.
Thank you so much for sending your reply.

I would recommend you do the fast cash and change message ones even if you don’t need them - do them on a separate database if you done need them.
They will help you get to grips with the automation flow and how to use constraints and automation commands etc.

Wow, that’s impressive, thank you for sharing. You’re quite a subject matter expert I see. Really appreciate it.
Let’s see how I go. BIG THANK YOU.

Ive done quite a few tutorials myself by using the functions in samba to do things they weren’t necessarily designed for, ive had loads of different setups and “designs” and I’m in the middle of redesigning and simplifying things at the moment

My tutorial 17 for cash up screen isn’t started yet as it was such a large setup ive not had time to sit down and type it all up, but it’ll give you an idea of how you can pretty much build what you want

If you get stuck you ask the forum and show us what you’ve done and we can help you with any issues (another benefit as that’s free support, you wouldn’t get that anywhere else

Thank you so much. For sure I will now be spending a few hours studying up on these tutorials. I am really grateful for the response I have received so far.

Hi JTRTech,
I have added the fast cash buttons, thanks to your tutorial. Now when I am adding the new action Generic Ask Question and select the Action Type “Ask Question” I am greeted with more parameters than on yours, for example my screen includes Description, Execute command in background, Inactivity command line, Inactivity Timeout seconds and Execute Inactivity command in background.
I strongly suspect someone was here once before me and tried to add the automatic user timeout function. Not sure whether to leave these additional fields blank or to populate with the command flow through value eg [:Description] etc. What would you suggest? 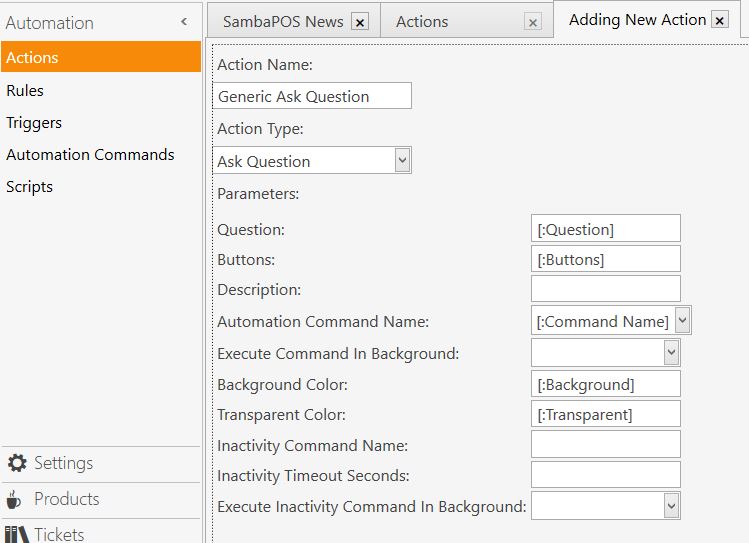 The extra fields were added to a update version after I did the tutorial following requests of mine for a way to close the ask question after a period of time as the ask question was keeping the ticket open and cusing issues with my PMS intergration.
Generally I create generic actions I can reuse and just ‘carry’ all fields and use as needed.

Hi JTRTech,
Ok, thank you. I am back at this task today. Appreciate your answer, it makes sense. Ok so it was one of your updates and not another random in our SambaPOS config. Will keep pushing forward, so far and following your tutorials its going well.
Tammy