Out of curiosity @emre, will the Group Boxes now be part of the Export as well?

Yes they are the part of the layout.

I am in the midst of setting up a database from scratch and learning as I go. I have imported the zip files that @qmckay had provide and also ensure that the Task Printer has been added with a “.”

The “itemType” tag created and “Food” and “Drink” filled in accordingly. I am unsure and having difficulties with the following : -

Noticed the status tag is not updated on the items within the ticket ie:“Fnotprinted” etc.

@satianv I remember I had the same problem. The database tools files linked above have a problem that the KD screen widgets are not aligned properly due I believe to a bug in the SambaPOS version that was used at the time to export them. I fixed it myself before and have exported fixed DB tools files - they are identical in every way to the original - please use these below, they should work:

Hmm Mark, unfortunately its the same problem. The screen layout is completely off as shown in your post when you faced this problem. Any ideas?

I know I had the same probelm but fixed it. I forgot what I did exactly but I know I played with the layout designer a bit.

What version of SambaPOS do you have installed?

If not done already, try to upgrade to latest V5.1.62 and import again. Tbe issue I had was also related to a bug in import / export that was fixed in latest release.

5.162 installed and tried the import again with same result. Also deleted the database, started from scratch and tried again to achieve same outcome. Sorry I keep troubling you with this… Maybe I just need to sort out the layout myself.

5.162 installed and tried the import again with same result

See below, on v5.1.62 I just created a fresh DB and imported those 2 files, and the entity screen imports fine:

That worked… I was running 5.162 but had to uninstall… delete setting files and reinstall. This helped to get the screen layout going. Thanks again Mark

Didnt have to uninstall. You could have just deleted your Layout folder

Please tell me if this is something I should post as a new topic, I have spent the last hours cracking my head on figuring out why nothing appears on the BB display screen when an order is created.

I have made sure “Food” and “Drink” “ItemType” tag (note matched to Automation). Checked the printer port has “.” in the field.

Ideas on where else I should be looking? Additional note : Status on the order Items are updated accurately.

I have made sure “Food” and “Drink” “ItemType” tag (note matched to Automation).

Question 1 - Yes this is what I did, and confirmed that the cases are matched to the rule. (did read this thread and noticed that the case sensitivity was discussed)

Question 2 - Yes assigned, i did do it individually but got there in the end. and the assigned ItemType was “Food” and “Drink”

Next time just upload the PNG file directly so it displays on the site, rather than zipping then attaching the zip.

Here is the screenshot that was posted by satianv 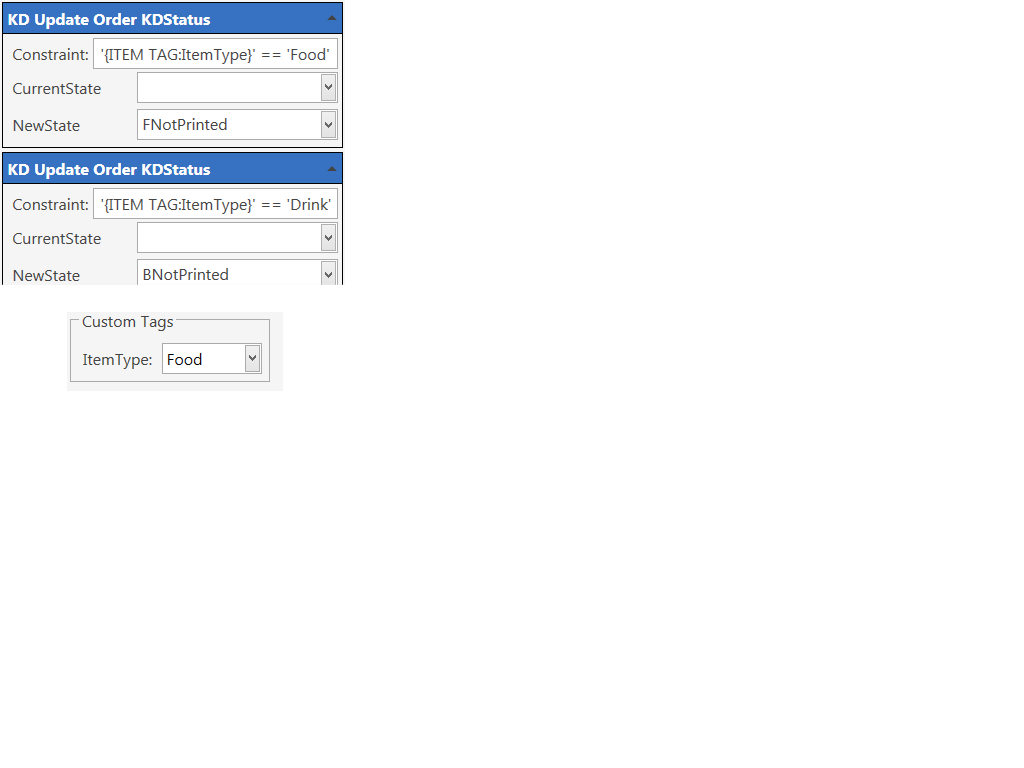 Thanks Mark, will take that advise.

Any ideas for next steps in troubleshooting? I guess I can run through all the rules/actions and tasks again one at a time in worst case scenario, trying to avoid it if possible.

Slightly different topic but was just thinking if there was a cheaper way of creating a physical ‘bump bar’ using say a numerical keypad and relabling the keys and mapping the keys to functions?

Bump Bar just acts as a keyboard, so you can use a numeric keypad and map the relevant number keys to automation commands.

I thought that would’ve the case.