Can you add a button to repeat order?

Continuing the discussion from How to after ordering want to modify the order:

How to after ordering want to modify the order

When i close the ticket, customer add order, how i incrase the item, because items are submitted can’t to modify , see pic, i want to likes that, my english is vert poor, so hope understand what i mean, thanks… 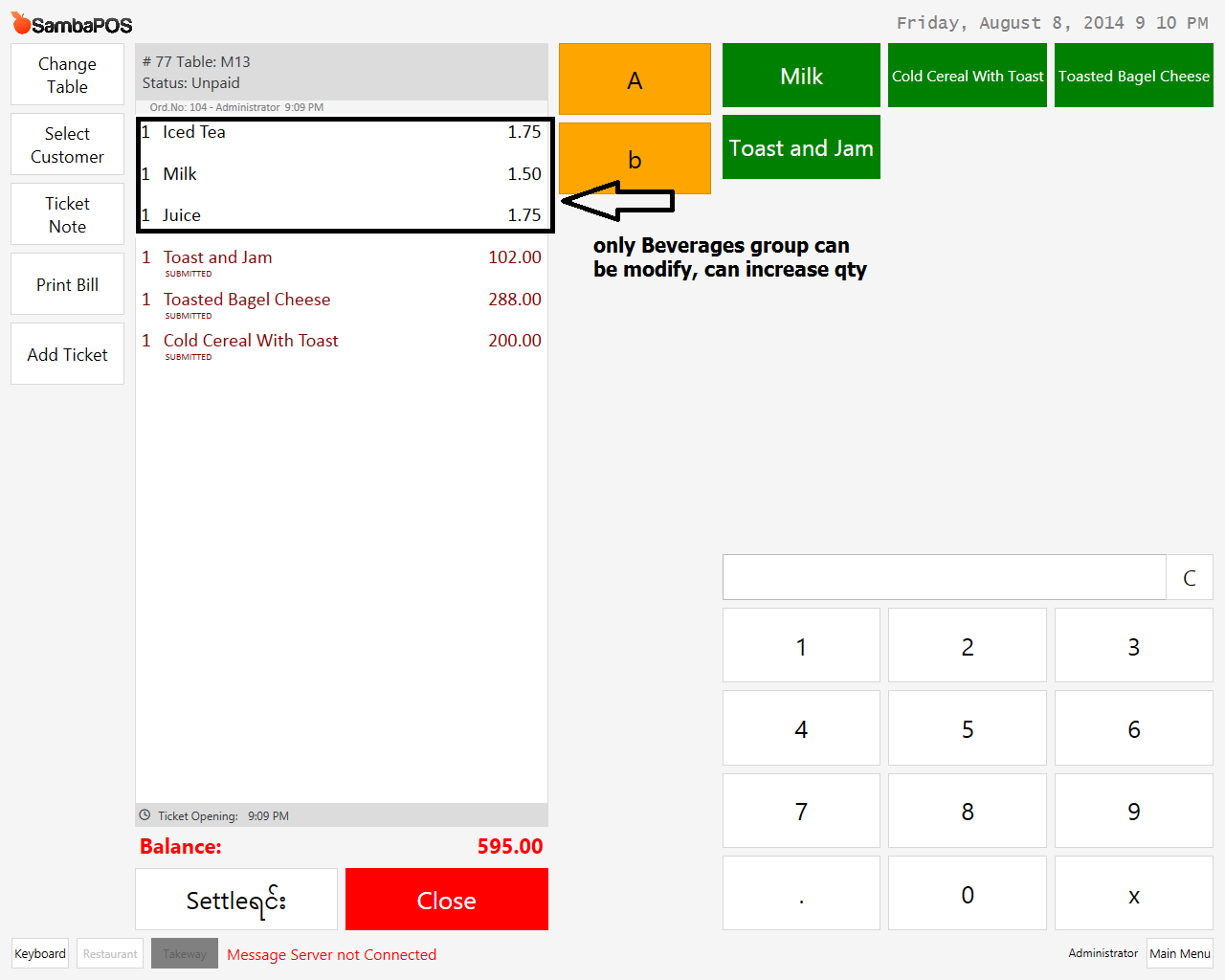 If i can’t just increase the item is there a way to select the item and create a button that displays when the order(item) is selected. This button when clicked would repeat the order to save time on looking up the drink in the computer.

Click on the order, and with the + / - button increase or decrease the order

@twhitelow you have to make automation command to update order state from submitted to new then you can use +/- to change it.

Here is your button.

Create an Automation Command Button - Map it to Order Line 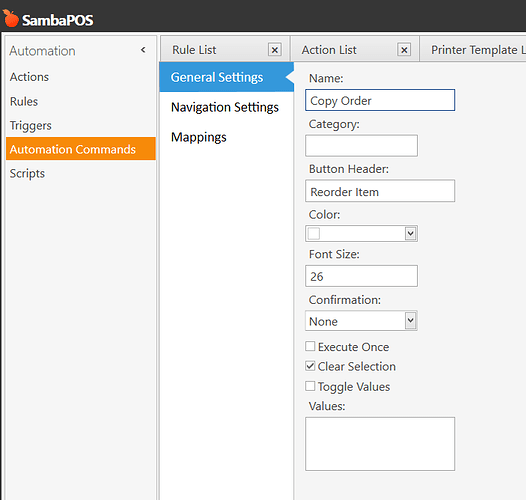 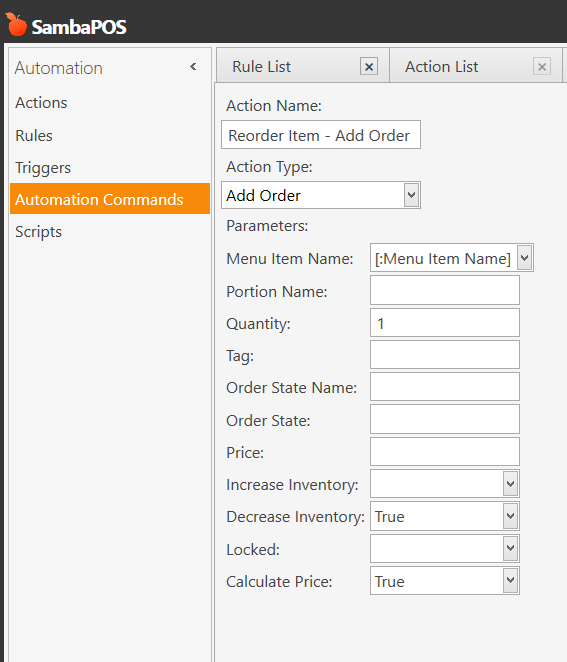 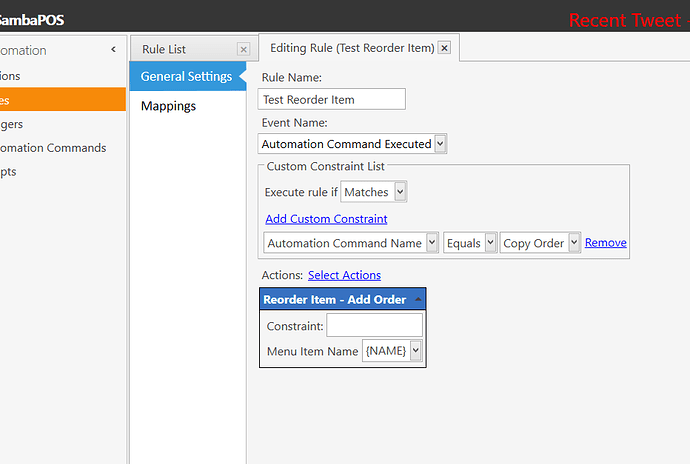 Thats it… its that simple. So now click on items you want to reorder and press your button. 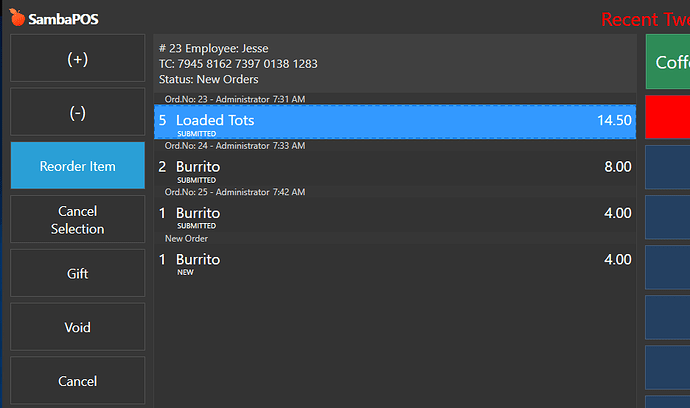 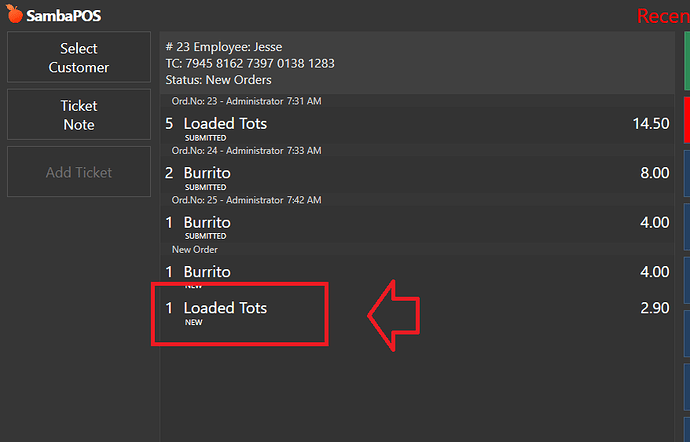 OPTIONAL: If you merge lines and want it to copy the same QTY then change the action and rule as shown below 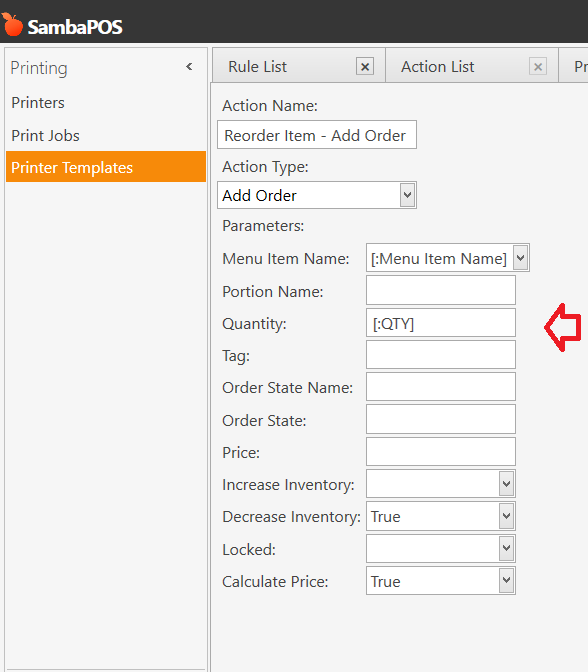 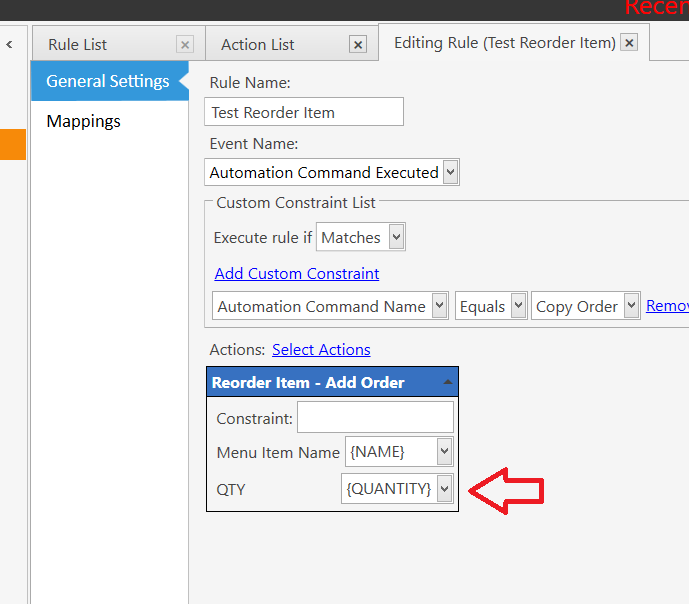 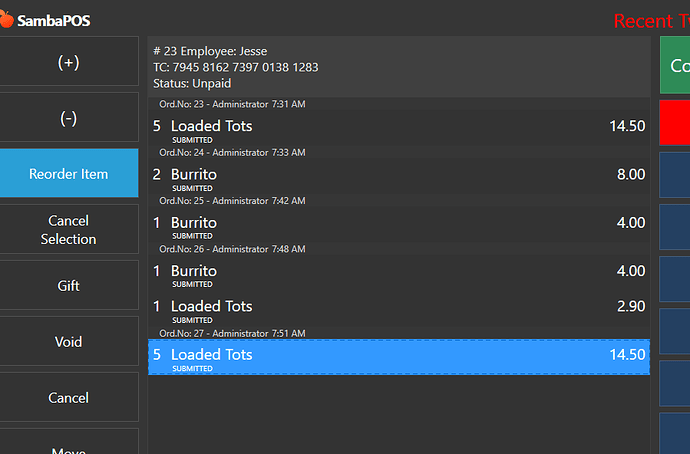 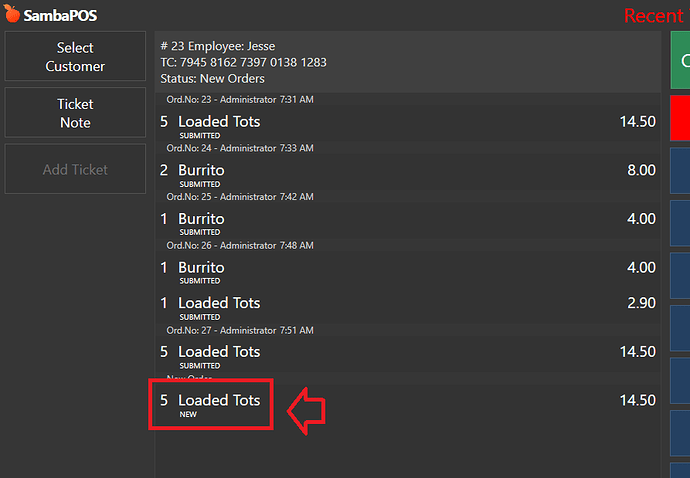 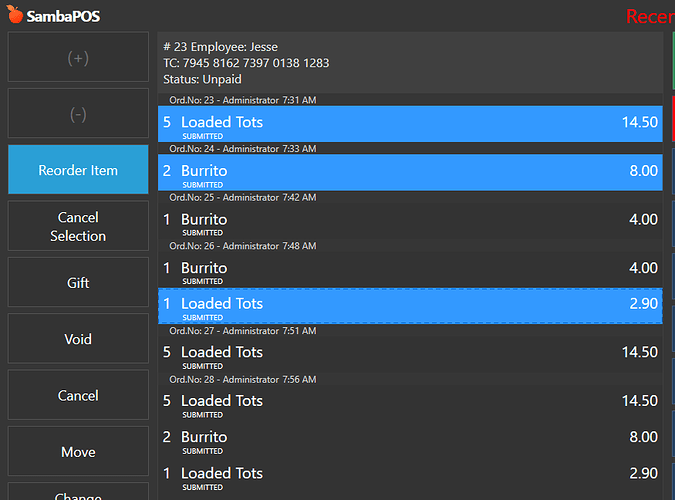 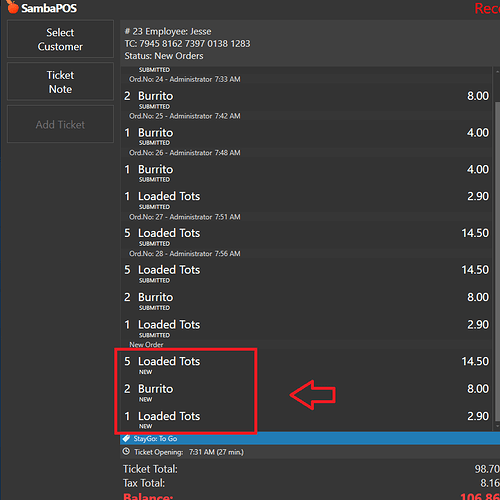 @twhitelow Have you seen the benefits of v5? You do not have to buy the license to try it. It has an unrestricted 500 ticket trial and after 500 tickets it still works it just displays annoying popups so you would not lose any data. $99 is a steal for it. It includes all previous paid modules for free plus some very nice new ones including Twitter Module for accepting Tweet orders and sending Tweets for advertising/promotions.

I will use this setup to create am Add Round button in my bar setup to add the same round of previously bought drinks on a tab!

I have request this for a while. Thank you so much @kendash. Never thought just put {NAME}. That is simple. Does it works with Item with Order Tag?

You should make this as Tutorial. 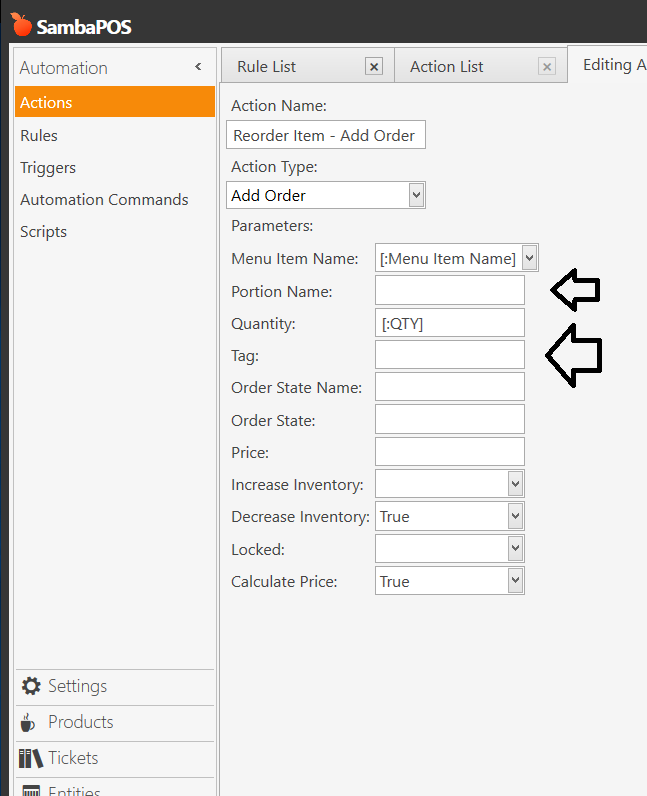 What tag return Menu Item Name with out Portion.
Portion is {PORTION}
What Tag? {ORDER TAGS} {TAGS} are not valid.
How to read those values from order?

Edit:
For menu name, I can use script to split it but how to read TAG?

It seems that may be a hickup in this setup. We would need to read more values for it to do this. And Tag was not for order tags like I thought.

EDIT: I will keep working on it though.

We are very closed. Maybe @emre can shed some light on how to read that TAG

There is currently not a way to just read it outside of printer template format syntax but that wont work here. Two things would need to change, the action would need to support Order Tags and then it would need to read them and add them to the order. So he would probably need to redo the action and give us a way to read it.

Anyway, Better than nothing. At least we don’t have to go through menu catagory->sub menu-> find the right button. Saving a lot steps!

@emre I think this is pretty much it default move button but only put it on the same ticket instead of new one. Is it possible to have action?

Not sure I understand that… you want move button to move orders to same ticket? If you want to split payments from same ticket just click on orders from the Payment screen and click pay.

This is re - order or repeat order Aka move button to the same bill ;). Not splitting bill.

BTW, read it from other topic, he might change process on move button so, maybe he can add option create new ticket true or false

Have you figure out a way? I think it is not possible in V4. I think should request in V5 category.

Turn out it is quite tricky. I even try script to clone order records. I work but quantity can’t not be change (+/-) not active. I figure if the data was written to database, it can’t be change even State was set to NEW.

When new orders are add to ticket, it is not on the database yet so, +/- are active.

I gave up now.