Hey guys. Previously I was working on a client setup where they had Dine In or TakeAway options. I had created auto buttons that would either go to table number selection, or it would straight away create a ticket and apply a ticket tag that stated take away or dine in.
The discussion can be viewed below.

Hello everyone, I’ve been gone for sometime due to health issues but now feeling a bit better to get back to work and more explorations. Ok so I have the gist of Dine in or Takeaway as ticket tags that can be applied to an order. But is there a way in which after each order is taken, a question is asked whether its Dine in or Takeaway. IF dine in is selected, then a table number is either put in or a table entity is selected before an order is taken. However if Take Away is selected, it would…

Coming from the experience of that and with some extra expertise build up, I’ve decided to revamp that system slightly. I wanted to make the process of creating such system easier.

Some aspects of my setup are still similar. For example I’ve still got the Dine In and Takeaway Buttons. 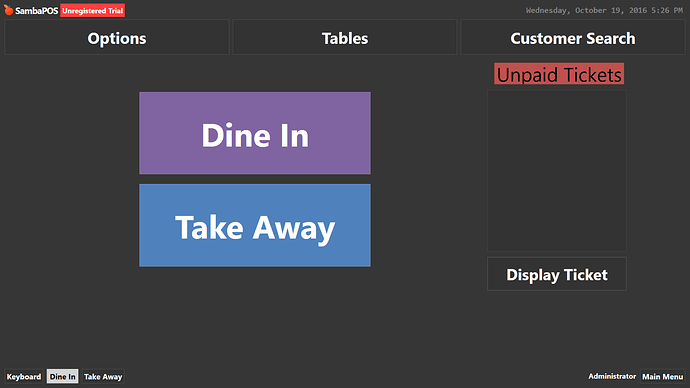 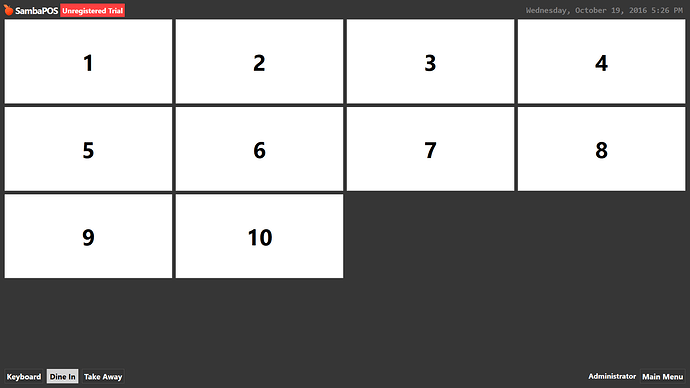 Pasted image1920×1080 33.2 KB
And now, the first change I made was, created a Take Away Department. Which now If you press it,
It goes straight to create ticket screen, and I made it so that when takeaway department is pressed, an order number tag is applied to it.
as below 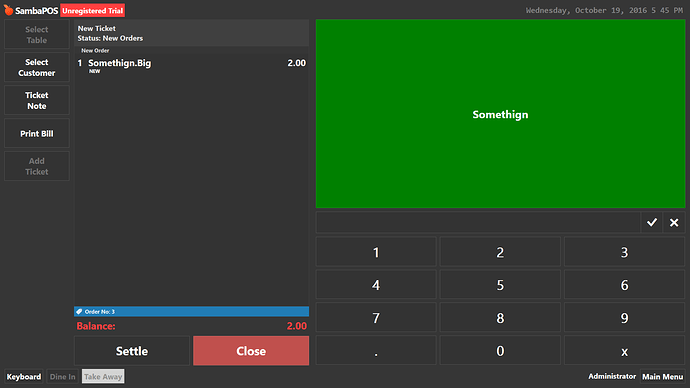 Pasted image1920×1080 55.3 KB
This way, whenever we print a kitchen docket, we could use the DEPARTMENT name on the header to distinguish between dine in and takeaway.
And on Dine in Kitchen Order, it already has Table number assigned to it. SO we can easily make prints without extra Print jobs and actions.

When in Dine in,
It doesn’t apply any ticket tag as below. 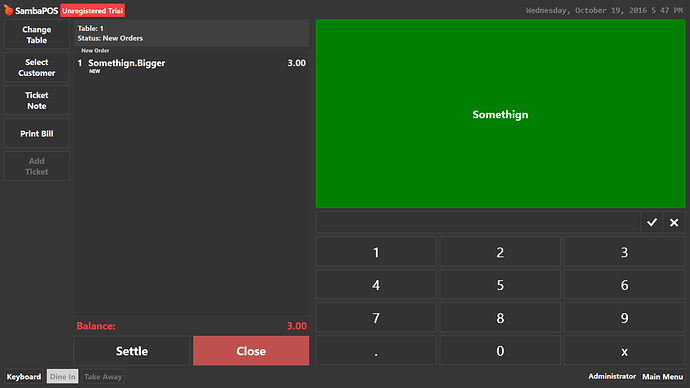 Pasted image1920×1080 55 KB
Which is what I want it to do, because since we can print via department name, the docket will auto show department name as “Dine In”.

The issue I’m having… On the Options screen with Dine in Button and Take away Button… “Dine In” Does go to table selection which is good.

Take away however… If you use “Add Ticket” command, it will create a ticket, but ticket will be created in Dine In department, because that’s the department currently where the button is located on. 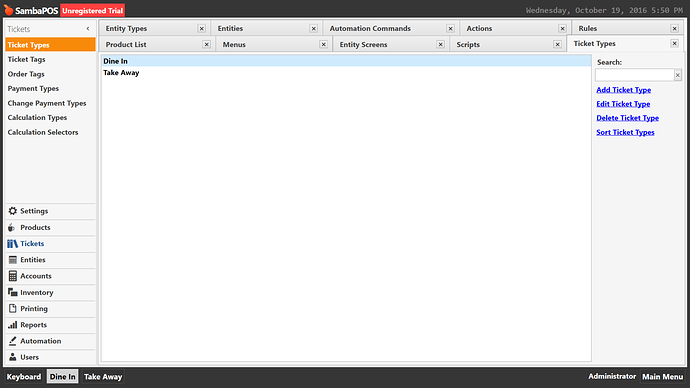 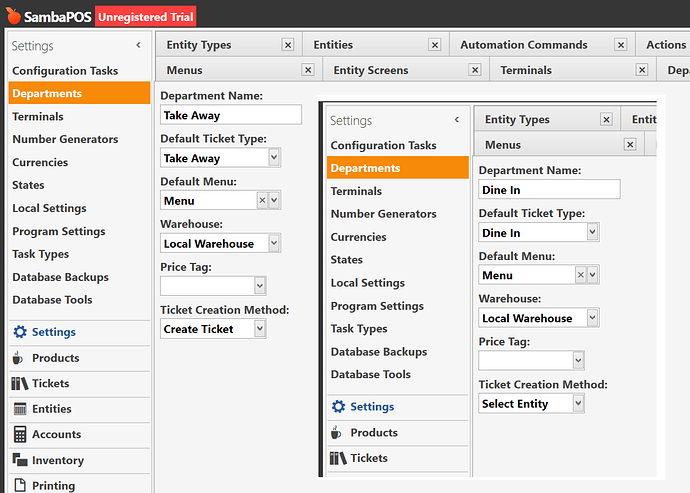 So what I was trying to do, was since my Order Number rule is applied to ticket type = Take Away 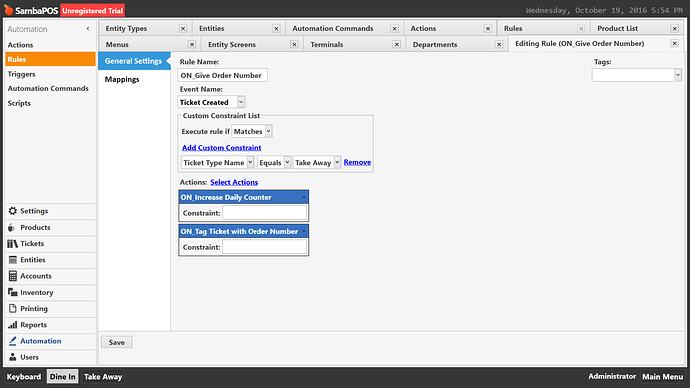 I was trying to create an auto command button named take away.
Then create the following action. 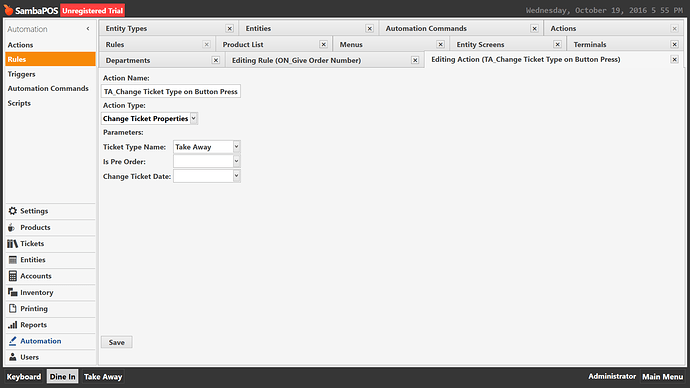 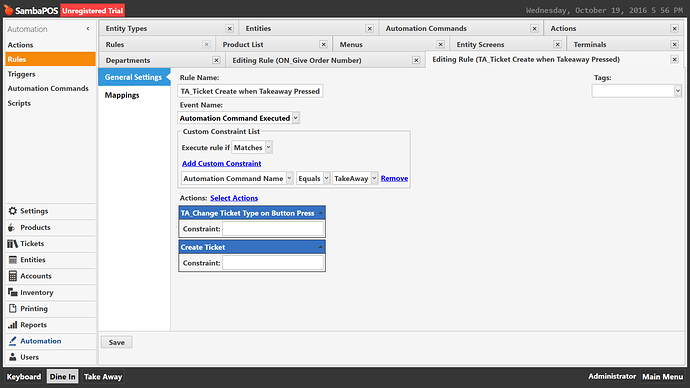 My question is do you need takeaway as a separate department? You can separate the two in reports without using departments or ticket types.

I’m aware you can . and one of the ways is using ticket tags. Like I did before. But I’m just trying a different method that’s all

Yes it’s possible. I built automation that did this. In the end I found simple ticket tags worked best. Go for it though you will certainly learn more by doing this. I can’t remember how I did it its been almost 2 years ago but I did use automation to achieve it.

Ahh interesting. Thanks kendash. Still trying to figure it out, different methods of achieving something in samba exposes the many different and powerful features samba has to offer. And it helps break a milestone in achievements . this may be a small step for me, but compared to when I first started using it, I’d like to think ive come quite a long way.

Anyway hope I can make this work. I know its possible, and I knoe im close to achieving this. Just need a bulb spark moment hehe

My day job is teaching and training future business leaders with Walmart so it’s taking a lot of my time. Normally I would jump in and help ya but I’m restricted to a little time on my phone and weekends I’m diving into GraphQL atm.

Thanks emre. I used that method the first time around. I was thinking of using the same type of method, but I just wanted to try this way just for sake of trying a different method. That brought back memories of first time haha.

Few years ago I did try to separate department and ticket type for Dine In, Take Out and delivery. I don’t remember why now I stick with 1 ticket type and 1 department.

There are many reasons to why just using 1 ticket type and department is better than having multiple. Especially with some recent enhancements to samba. With the use of fast menu switch and uses of ticket tags. It would be stupid to not do it that way because of how easy it is to setup in comparison to separate ticket types and departments.

Again honestly I’m just doing it this way to further increase my knowledge of samba and the many potential ways of setting up similar flows of operation.

I’m getting close to figuring it out but just need some minor input in how to make pressing an AMC on entity screen button trigger a switch of department or ticket type. Coz if I can at least achieve that then It will help me understand it better and it helps minimize the amount of print job actions and automations to make printing based on department work without the use of ticket tags.
Again I’m completely aware of ticket tags and by using them eliminates departments and in fact even helps with ticket display widgets and many other benefits. I’m just doing this for sake of testing my knowledge and expertise in automation, samba, entity screens and its related things

Create the Ticket before attempting to change the Ticket Type. Your Automation Command Rule has them backwards.

Yeah I figured that was the case. I’ll test something out and update you