I will add more details to the above, soon.

Awesome. When completed we should include it in tutorials listed on sticky topic.

Will it be possible to edit the work period report to deduct the expenses from the total cash?

For example, total cash business is 1000. There was 80 total of expenses by cash. The cash drawer should contain 920 in cash. How can I get the work report to show this?

It does not reflect Payouts in the Work Period Report, but it is shown correctly on the Account Screen. 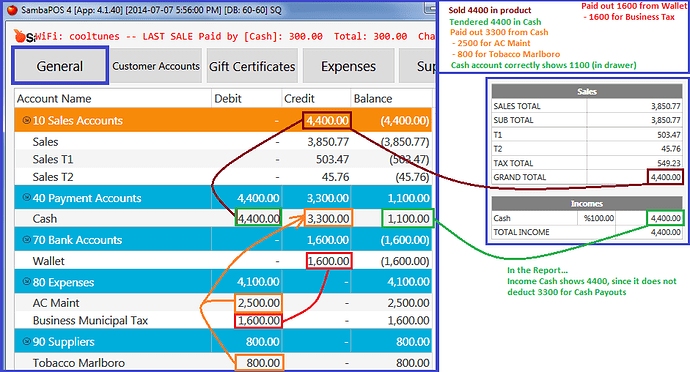 This is precisely why I run my own Reports using SQL. 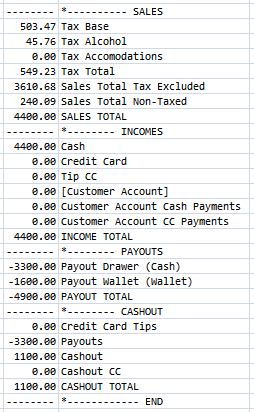 @QMcKay I’m planning to create a custom account reporting tool to solve such needs. I thought we can Create Sections and choose Account Transaction Types for a section. After choosing a Account Transaction Type we’ll choose if we’ll list source accounts or target accounts and if all transactions should be listed or only account balances. Finally we’ll display balances of all sections.

Do you think we can reproduce your report with that features?

From your description, it would be very flexible and customizable, just like the rest of SambaPOS.

My reports contain a lot of aggregates and special cases for adding and deducting transactions (or their sums) in order to come up with Balances. This is especially important for the Cash Account (drawer).

I would also like to see the Inventory Purchasing transactions exposed, perhaps in a more friendly, integrated manner.  Currently, when we purchase product from a vendor we use the method described above to track the money.  Then if we want to track inventory, we need to make a purchase in the Warehouse, so it is double the work.  It would be nice if we could combine them. 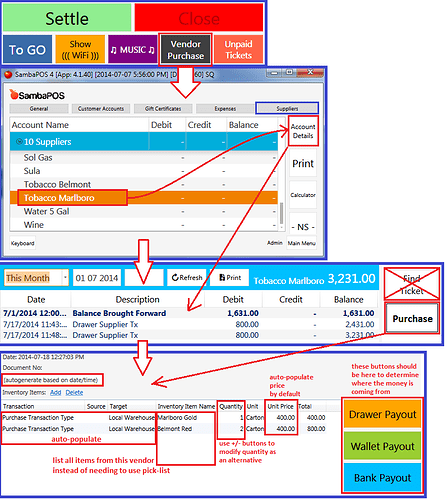 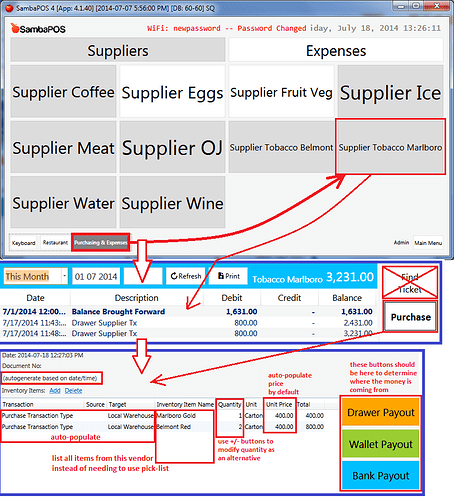 By the way, @QMcKay, thank you very much… I implemented this following your set of isntructions and not only worked, I also understud it…

I don’t think its implemented yet.

Hmmm, Is it possible to backtrack this and add expense & wages documents to the past? it’s just that i’ve never uses sambapos’s integrated accounting features before and i don’t know how i should implement it mid-way

If you are not using it now but want to transition to it, it would be wise to transition slowly. I wouldn’t try to convert the past to it I would convert future to it and make sure it meshes. Plan your transition you could just slowly transition parts of your accounting until you eventually have everything you want. The only way to backtrack it would be to manually edit your db and that would not be advised for accounting way to involved and way too big potential to make mistake.

Keep any of your past record keeping and just pick a cutoff date for the old system and switch to new one. Your accounting will not be affected as long as you keep your old records in a place you know where they are and can access them. I would advise starting on the first day of a fresh month or week if you do weekly.

I don’t have any Automation Commands named “Calculator” or “Open Drawer”. Need it for this step:

How do i go about constructing them?

I have not set up a calculator but I assume its linked to an action to start calc.exe To make an open drawer button you simply make an automation command named Open Drawer… you make a printer template with your drawers Kick command Make a print job to handle that template. Make an action to execute that print job. Make a rule that when the Open Drawer Automation Command is executed it fires the Print action.

The calculator would be setup the same as the Open Drawer the exception being you do not need to make a printer template you would use the action Start Process and set it to start calc.exe

You don’t need them for implementation to work properly, but here’s how you would make them… 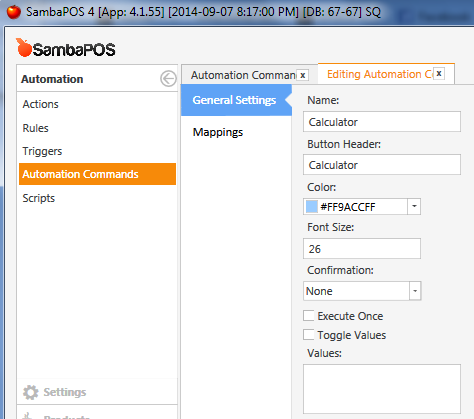 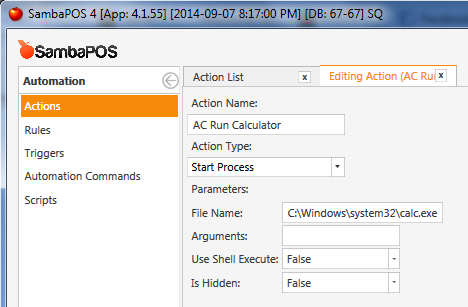 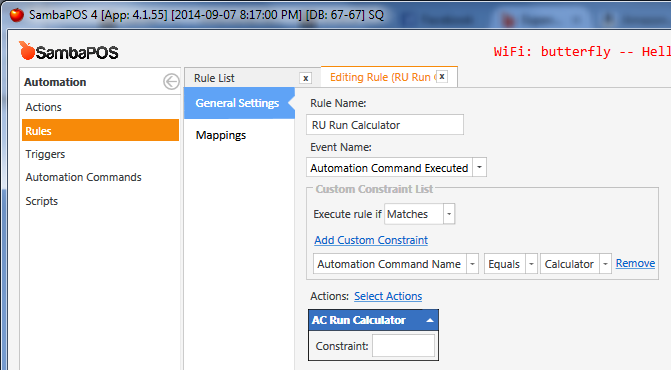 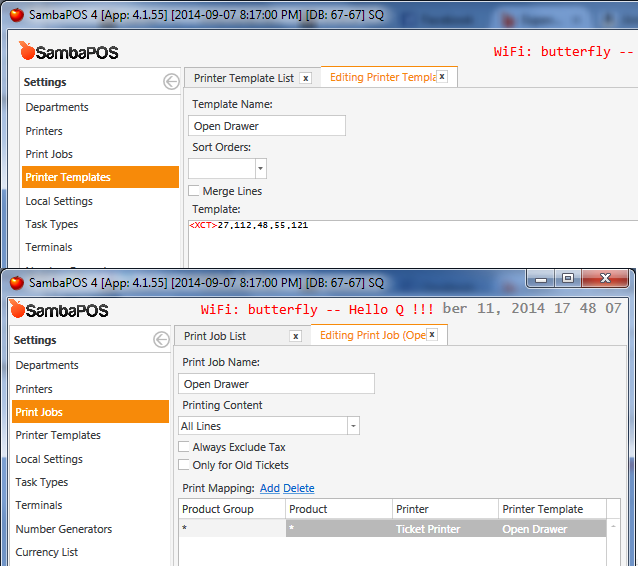 Open Drawer Automation Command (you can map this to appear on the POS screen somewhere, but no mapping is required for it to put it on the Account Screen): 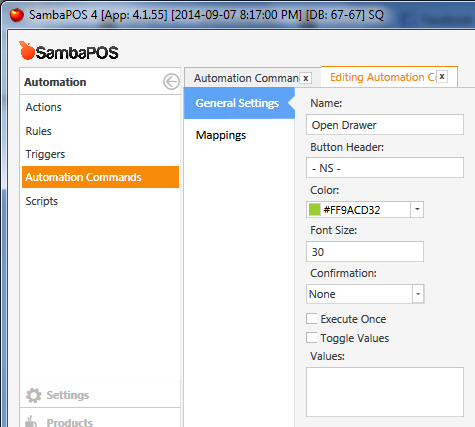 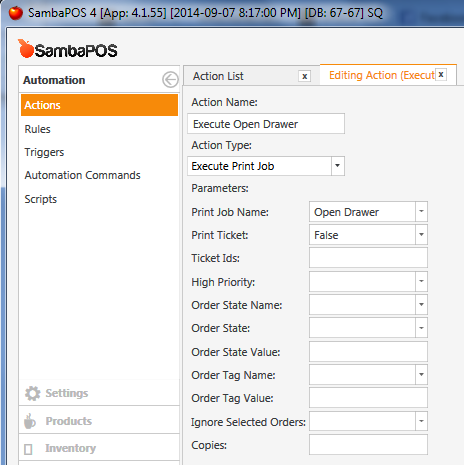 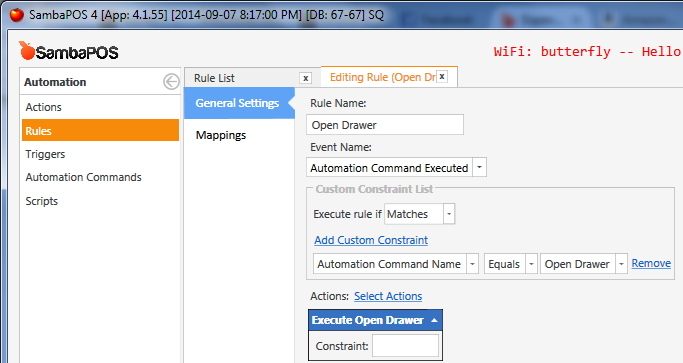 Thanks for the help

Would you mind sharing the SQL script sample for that report? Thank you.

@q37 what report are you referring too?

This report. I’m trying to replicate the report with SQL but I’m unable to do it.