Just to bust in.
I think it may have nothing to do with a submenu but Fast Menu? I using V.60 and just implemented fast menu to swap between Department Menus while in a ticket. The first item selected always produced a reset of the Menu for no reason?

Knife to my heart for a self confessed perfectionist…

My fast menu to change menus works fine and does not reset. You mentioned departments if you have menus defined in ticket type or default menu for department defined it may do that.

Yes Hi kendash
I removed departments from Ticket Type because we talked about this here:

I think I know what it is… it has to do with your POS button one second. EDIT: Ok its your Ticket Type. The POS menu is set to Kitchen. Edit your ticket type and set POS menu to Bar

But is still shows the same behaviour?

Yes it is set to Bar…
Just removed it as thought that may have been a HINT as you do but no luck just comes up blank.

BUT if I change the USER -> Department to Kitchen it starts with kitchen and operates Ok?

Try removing default menu. Logout and log back in see if that makes a difference. Only problem I could see there is it may not start with correct menu when you select that department without some other automation.

Yea I originally designed the Users so they did not access the Kitchen Menu but they need to in this venue so here it the issue right here: 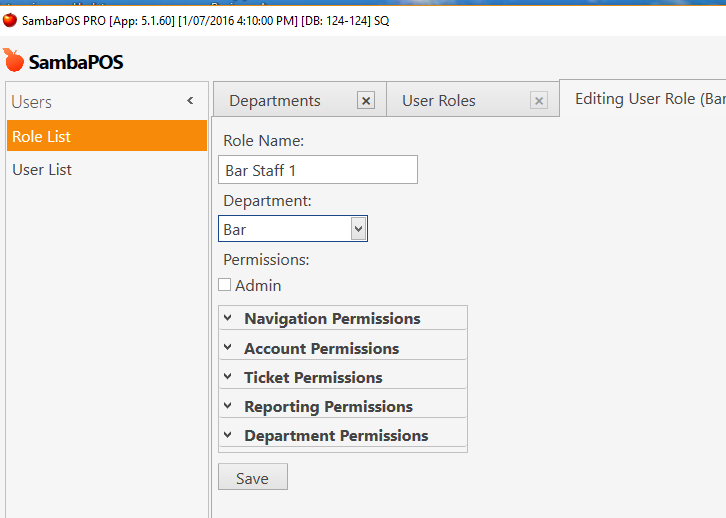 Ah so that makes sense. Its the user being forced to Bar Department.

Correct, but it only does this if you use this sequence:
FAST MENU -> EATS
Add 1 Item
Reverts back to DRINKS automatically

That is because your first example it started a ticket outside of the department and when it starts ticket it automatically loads that departments menu you just saw it delayed because it didnt start it until item added. Thats my theory anyway. Second example worked because you already started ticket from designated department so it didnt care.

That is my theory anyway… we could probably test that, but I am tired.

Yes you probably right.
Thanks for you thinking as I see it late for you! So do I call out Emre here for a check?
I swapped a Kitchen Staff user (just in case it was the sequence I set my menus up) and it also swaps the user back to their DEFAULT MENU.

Some reason I doubt he will respond. He has been deep in work for past 2 months almost. Hasn’t even said anything in Staff forum.

He has done this once before and the result was version 5 lol. Although not quite as long. Typically he might say something to us though. But we havn’t really been asking either I am fairly sure he is working on something really cool.

Well we can do quite a lot with this version and I have not even had a crack at GQL yet! Have been setting up quite a few venues for him (and us) so not freaking out as most issues I find we can work around…

GQL is fun. Gloriafood is versing me quite well in it.

Yes I have a clear direction for GQL - it will become the “glue” for out interfaces into SambaPOS (which was Emre original thoughts). I just need to get a clear copy of all the latest tools Q’s has been building

Good chatting - get some rest!