How do I report all users for Admin

If CURRENTUSER gives the logged in Waiter their report what would I use as the Admin to show ALL Waiters reports?
Continuing the discussion from Table transfer between waiters:

So you could try this report syntax @josephrussell:

So this would work great for you:

there is Print Report action…You would use a variable for Report name like [:Report Name] and then in the rule you put {:CURRENTUSER} for Report Name.

In this case {:CURRENTUSER} would work because thats being used in the rule.

EDIT: Actually you wouldn’t even need to do that its much simpler… you could just make one report and call it from the Print Report action since the report itself is reading {SETTING:CURRENTUSER}

The image path is missing a locate button. I struggled for two days trying to figure out why SambaPOS is not able to find the images, though I need to put some relative path and have the images in the same folder as the SambaPOS executable or program data or application data…
The screen for edit all categories has a locate button.

Hope this helps, thanks for all the awesome work… 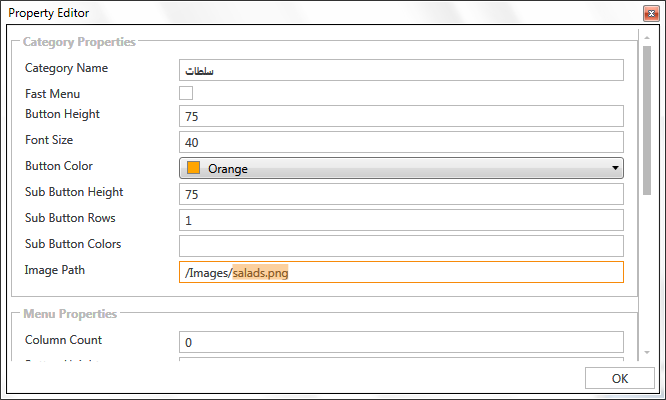 Not sure what your second screenshot has to do with your question.

If CURRENTUSER gives the logged in Waiter their report what would I use as the Admin to show ALL Waiters reports?

What report are you wanting?

PS: It is a bad idea to continue discussions if your asking something that does not contribute to that discussion. Its best to simply start a fresh discussion and explain your problem in detail.

Also in reference to your second thought your continuing a discussion but not asking anything so what are you wanting to know?

Ya sorry I was trying to refer to something related to what I’m looking for. Not sure how the second topic got there though??

Thanks to the help of @josephrussell and yourself, I was able to make a report for my waiters to print at the end of their shift as the Work Period Report was no longer usable for them. Problem is, some of them print this report before closing all their tables and now I need to find out which waiter it was. I’m hoping that rather than having to print each of their reports separately I can just print one report that shows all Waiters like how the Work Period Report shows all Users. So if {CURRENTUSER} gives the logged in user their report is there something I can put that prints ALL USERS?

Problem is, some of them print this report before closing all their tables and now I need to find out which waiter it was. I’m hoping that rather than having to print each of their reports separately I can just print one report that shows all Waiters like how the Work Period Report shows all Users. So if {CURRENTUSER} gives the logged in user their report is there something I can put that prints ALL USERS?

Why wouldn’t their tables be transferred to another waiter prior to closing or prior to ending the work period? The main point of transferring tables for owner/manager is to reconcile different till balances. Currently our waiters print an End of Shift Report (custom report) based upon the Employee/Waiter Entity and put that in their till. If they have any tables prior to end of shift they transfer them to another waiter. The Work Period Report does show “settled by” user and should match the original “Transfer between waiters” concept as if we’re mainly concerned with what user settles the ticket, not who opened it. 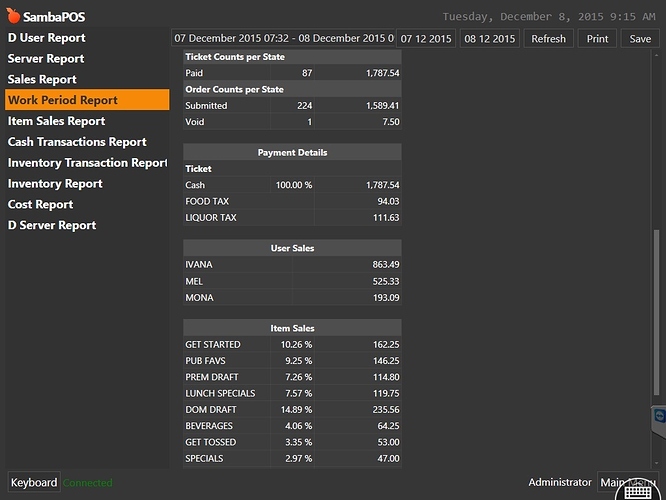 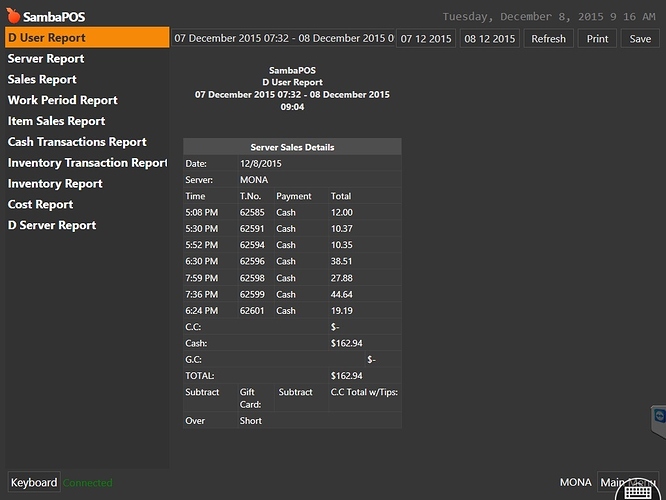 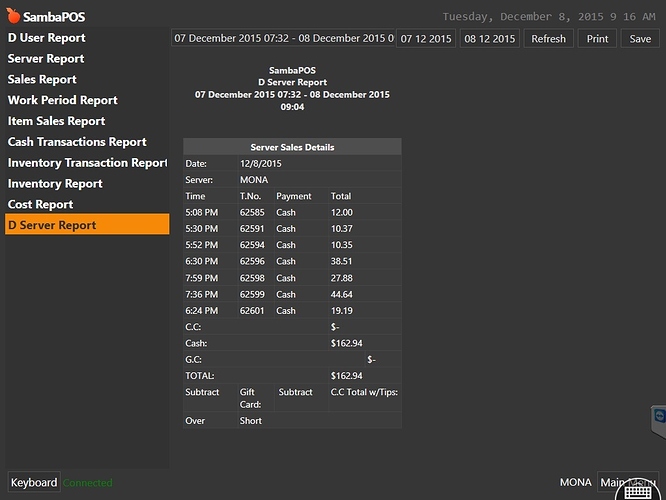 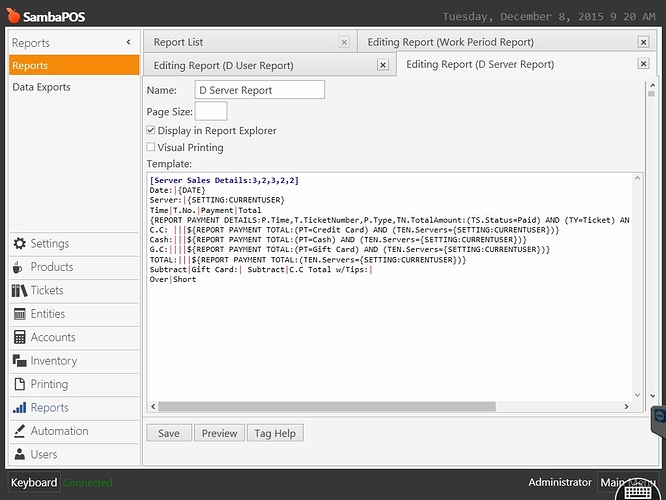 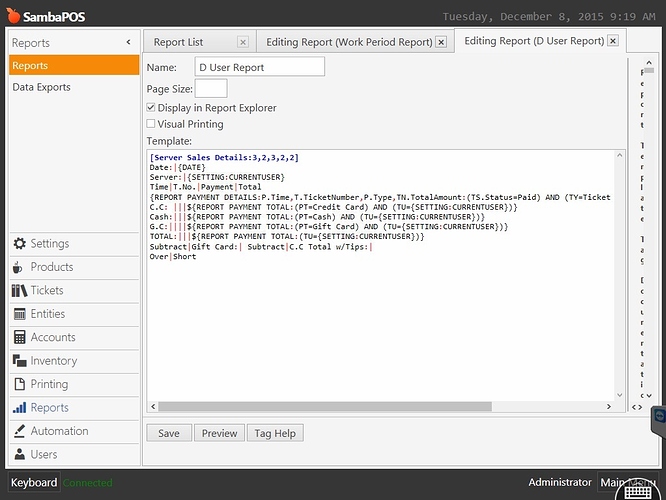 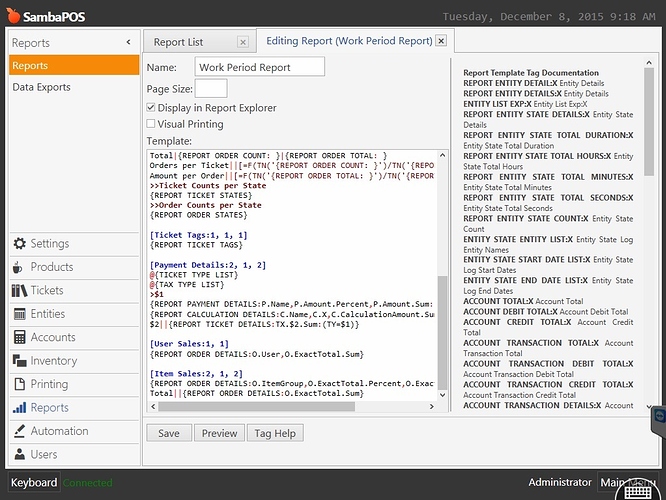 I’m about 99% sure that my “user report” and my “server report” are right but I’d be lying if I said I wasn’t a little freaked out over this!

One is tracking who added the orders to ticket the other is showing who took payment. So both are working fine. Maybe you should rename your user sales report to user settle report.

I swear my “Work Period Report” used to give me “Settled By” amounts for all users. Can I recreate it?

Yeah that was close

Can’t thank you guys enough for the help and so quick too!!

Upgraded to 5.1.56 this morning so I could implement this into my work period report and now I can’t send or close a ticket. Any ideas what may have happened?

Does it give an error?

No it doesn’t. If I push Close Ticket nothing happens and if I push Settle Ticket it takes me to the Settle screen and once I Settle it the screen goes right back into the ticket. Course it’s busy as hell here too!

If I did a system restore would it revert to the older version (5.1.50) that worked?

Went back to 5.1.50 and everything is fine again. For some reason my system doesn’t work with 5.1.56?? Did some really weird things with my automation. For instance: when I push my “change server” button instead of prompting for User id it wiped the server right off the ticket.

Odd can you PM me a backup so I can test it?

Tried to upload my backup (zip file) from both my test comp and my live comp and both just disappear at 14 percent. is it because its too big? … 52,000KB

We increased upload limit. It should work fine now.

Tried the 5.1.57 update and still have the same problem as I did with the 5.1.56 update. Can’t leave a ticket and the only way I can shutdown Samba once in a ticket is through the Task Manager?