How to use Database Backup Module

Backup Module is an Add On Module for SambaPOS. You can install it through SambaMarket. 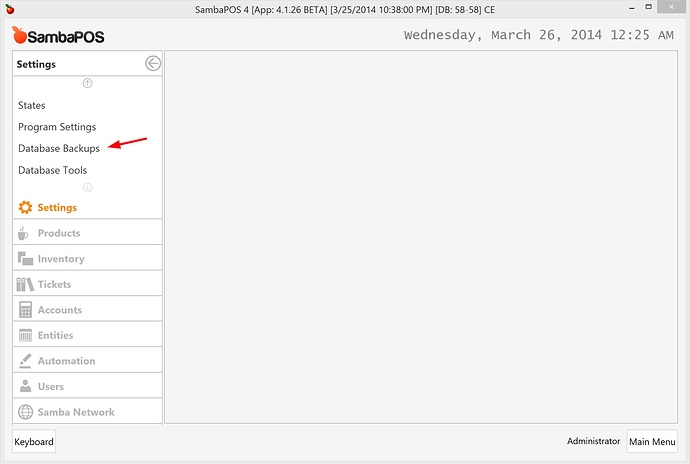 Since we don’t have any backups yet the main screen is empty. 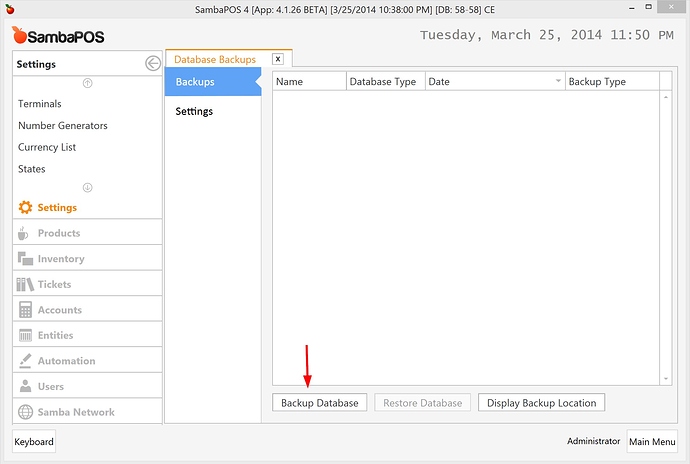 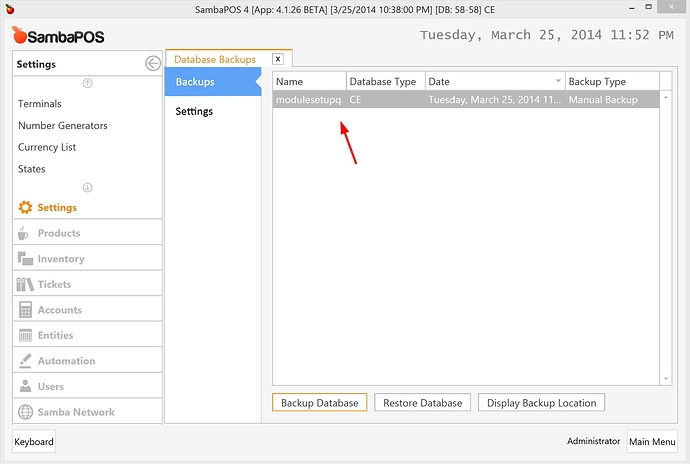 You should see backup details on the list. New backups will appear on top of the list.

You can select a backup on the list and click Restore Database button to restore your backup. 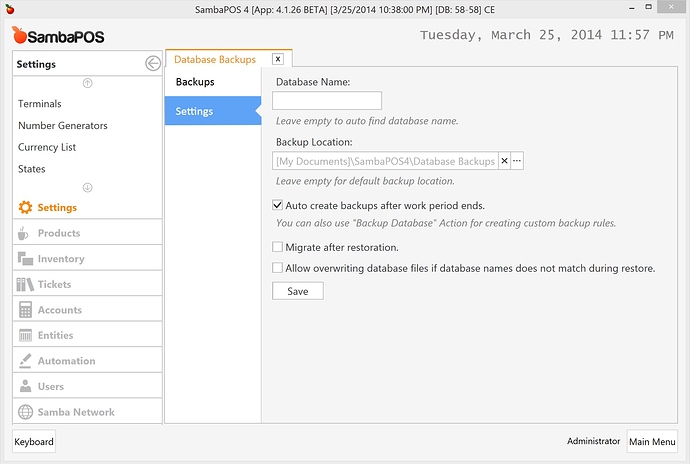 8 Likes
Migrate/Import entire database from one SQL instance to another
How to save all the data to transfer to another computer
Moving the program to other computer
How i can backup samba v4 im using sql server 2012
Samba Market is Open!
Database Backup Module error
How to copy transfer data base to new pc
fickle_123 May 25, 2014, 10:34am #2

This would definitely be worth buying to save time from backing up manually!

By the way, is this feature the same as SQL server management studio’s “Full Backup” option? and can I restore it on different machine?

where is this option “Create Backup action for advanced uses.” 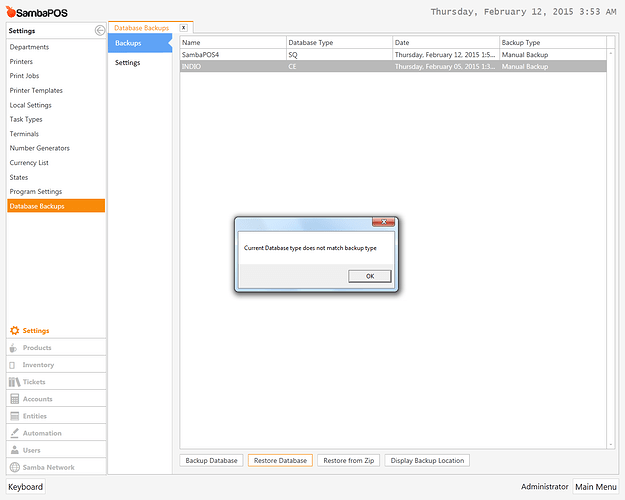 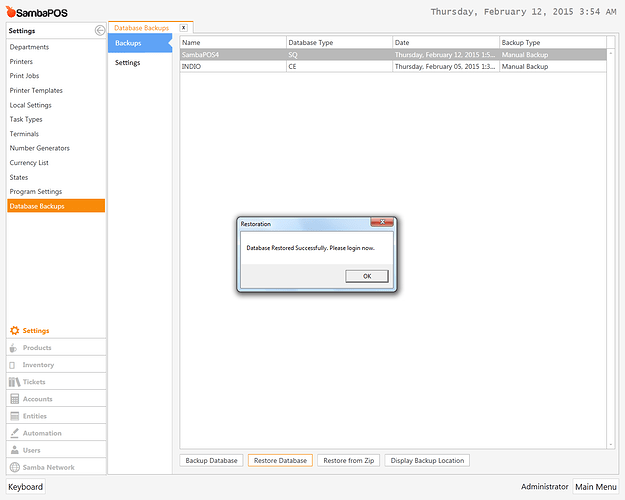 You can not interchange CE and SQ. You should convert your CE to SQL and use SQL. CE does not support many of the advanced functions and is quite frankly slow compared to SQ.

Really how i make this convert. y have installed (SQL SERVER MANAGEMENT STUDIO) You have a tutorial that makes this convert?

Yes there is a tutorial. Second half of tutorial explains how to convert CE to SQL Must click on the link if you just expand it inside this thread it will not show second half.

hello,
i’m sorry but I have ran into a problem and I just don’t know what to do. I uninstalled and deleted the sambapos4 folder from my documents and after reinstalling sambapos, the problem is still there.
When I try to do a backup, it just wont let me. I get error message:
Cannot open backup device
‘C:\Users\Lu\Documents\SambaPOS4\DatabaseBackups\SAMBAPOS4_Full.bak’.Operating system error 5(Access is denied.).
BACKUP DATABASE is terminating abnormally

Common mistake but thats permission issue. You should not backup to users folder. These folders are protected by Microsoft you should backup to another folder outside users dir

Man that was simple. LOL
Thank you, you guys are great.

@emre Was thinking today after looking at the backups directory that it would be nice to be able to configure some form of catalogue archiving for automatic end of period backups.
I think setting auto backup at end of day is a must for any install to ensure if anything happens you can jump back to 24hrs at the most.
However with this setting obviously the backups soon start mounting up and although you can obviously go in and take out older backups it would be one less thing to remember/do if there was a way/option to do say daily for a week, weekly for a month and monthly for a year or more or something like that.
I might be wrong but cant see an option nor can I cant find a post to do this as would imagine it would have to be a built in feature of the module.
would you agree @Jesse
I think this would make a very nice addition to the module weather it be a module update or maybe option in v5.

V5 has some additional features as I will demonstrate in a screenshot.

We discussed archiving and it was agreed that there is a benefit in it however we also felt that its not a pressing feature and we would rather see other features given more focus.

@kendash description is a nice touch as would be good for labelling what was changed when programming new features.

Understand the focus on new features, very fair point, just thought id ask as couldn’t see the other post.
Just which I was more clued up with programming and coding as Samba is one of the few programs i’ve used and thought that I wish I could contribute more.

What many don’t realize is by initiated good dialogs that is contributing in the best way. I mean good solid questions with supporting information and clear ideas with workflow helps this thing grow.

A good example is a few discussions me and @QMcKay have had started small and ended with 500+ threads and more than a dozen new features implemented. We may not even thought of those features if we had never simply started a conversation.

Also I just made a feature request in the beta forum specifically because of your question I may not have thought of it otherwise. So you are contributing simply by being active in discussions.

glad to have a little input lol

Quick one for you if I can? Can’t remember the thread you were involved in (not that there’s one your not ;-p) it was on but I’m sure a while back I read that a new feature in v5 was improved handeling with wifi (tablets etc) where the network connection may drop and reconnect… Am I correct? Is that a feature implemented?

Yes there is a reconnect in v5 now.

That’s a nice feature, very useful.
Presumably it would also come in handy should there be any sort of inturuption on network either wired or wireless.

So I can make a backup action to backup every 5 minutes or so?

That’s been possible for a while with database backup module. Yes you can.

Can you email the database backup