Hello guys,
I am new using SambaPOS and I am trying to find out if there is a way to have the kitchen display setup in this way:
When a new order comes in the ticket is in green after a certain time has elapse it changes color to orange and when the ticket is overdue it changes to red ??
Is that possible with SambaPOS??
Thanks for your help

Yes with some scripting it’s possible. I’m not at a computer to demonstrate. There is an example in v5 welcome thread.

I read on this thread about a guy that did what i want, however he didnt explained how he did it.

Thats not even remotely close to what is possible now. Take a look at this: 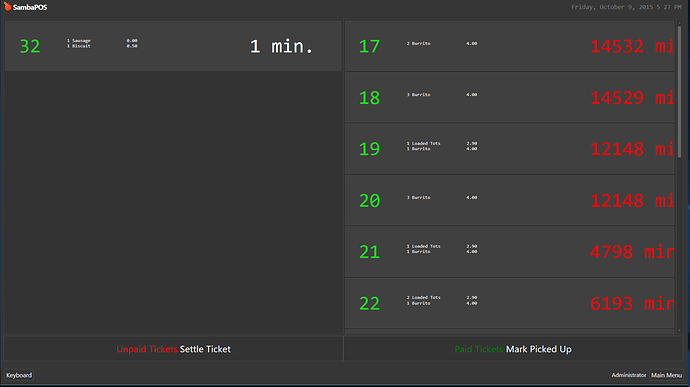 Later I will share how I did that I plan to write a tutorial on how to setup a nice customized Kitchen setup like that. However we are working on something even better. 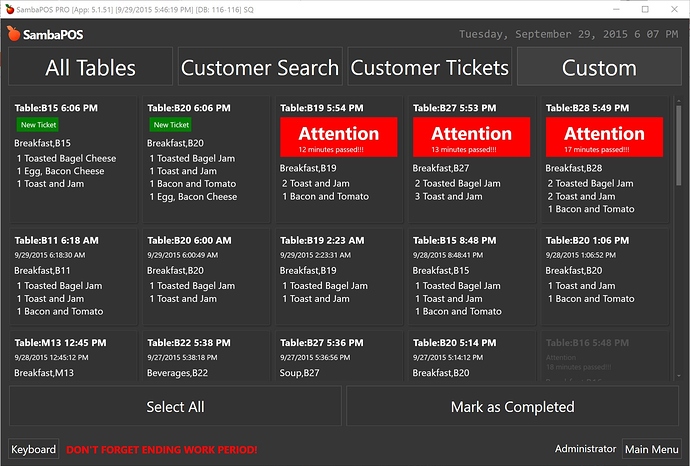 That is awesome @kendash it is exactly what i want!!!
Would appreciate if you share how to accomplish that.
Thanks a lot

The second one is Order Level even. It lets you select orders not just tickets and mark individual orders complete. Its a brand new feature so it might take a bit to see a tutorial but I plan to build one I cant promise when.

The second screenshot uses Task Editor Widget and some new features with it and a Task Printer. You can read information about it in the features thread it was released a few releases ago. Right now that is the only documentation it might be a bit before you see a full tutorial.

One last thing, i would like to view on this screen is a tiny view of totals ordered. for explample: i got 4 tickets or orders.
first ticket they order 12wings, 1 hamburguer and fries
Secong ticket 48wings, fettuchinne,
Third 6wings, nachos, hamburguer

On this view would like to view: 66wings, 2 hamburguers, 1 fries, 1 fettuchinne, 1 nachos

You mean you want a view somewhere on the screen that shows totals of all products? Or are you wanting to group it some other way?

I am sure that can be done but can you explain how its useful? What does that solve?

I would like to view totals ordered.
This is useful for kitchen staff so they know on a single glance how many wings they need to fry and have ready in order to fullfil the orders. Then they can view single ticket so they can find out type of sauce for those wings. That makes sense??

My questiion is what if they drop all of those wings into fryer… those orders are cooking and more wing orders come in and it ups that total because previous orders not cleared yet… Then lets say more wings come in but one order finishes so you clear it and then the total reduces… but you have not put the others in yet… now all sudden the total is not helpful.

It can be done I just am trying to understand how its truly helpful.

Now we are getting somewhere… Think through your flow completely we can work on other details later. Come up with a plan of how you want it to flow operationally then explain that flow in detail and we can try and find a solution to build.

When new orders are submited

Hi Kendash, woooow its nice set up
appreciating if you can share the your kitchen display set up

Great description @Ruben_Arellano its much easier to provide help when you explain your problems like that thank you. I will be working on this over this next week. I cant promise when it will be finished.

@kendash thank you very much i do really appreciate your time. If you ever come to Mexico let me know. Would get you plenty of beer on your table lol

@Jesse – How did you create the custom screen to look that way? I own v5 but when I create a kitchen display it looks horrible and the tickets are all spread out and not in nice little boxes. Also, they won’t use the entire width of the screen, SambaPOS only lets me make the ticket listed widget in the center part of the entity screen wasting a ton of space on the sides.

What is the solution for this?

@Luis_Varsan the screen with the nice looking cards is not a ticket lister at all. In fact its a Task Editor. I will be creating a Tutorial with a Configuration Task for a Kitchen Screen similar to that but until then you could play around with Task Printer and Task Editor Widget.

It uses Task Printer and a Printer Template for the format of the Orders or Tickets and it uses Task Editor Widget to display them and create the buttons.

Its a very advanced setup for Kitchen Display and its still somewhat evolving I was waiting for few more features before I wrote a tutorial. You will be able to control Order Level and not just Tickets.

Thank you for the reply! As a side note: is there a way to make the usable area of the entity screen greater? When I try to use my entity screens I get only a white space in the middle and gray bars on the sides which is a waste of about 30% of the width of my monitor. Thanks.