Hi guys!
I have got an strange issue that its missing orders on our kitchen display every time i make order of same item many times.

I Paid a guy 2 month ago from Sambapos Forum to help me with the kitchen display, but it took very long time, and last when he installed the kitchen display, theres still many issues that made it not possible to use…And sadly, it doesnt seems like he care to answer me anymore

And i am trying to figure out how to make it work my self. Hope that some one can help me to finish my project…
Heres how the order looks like: 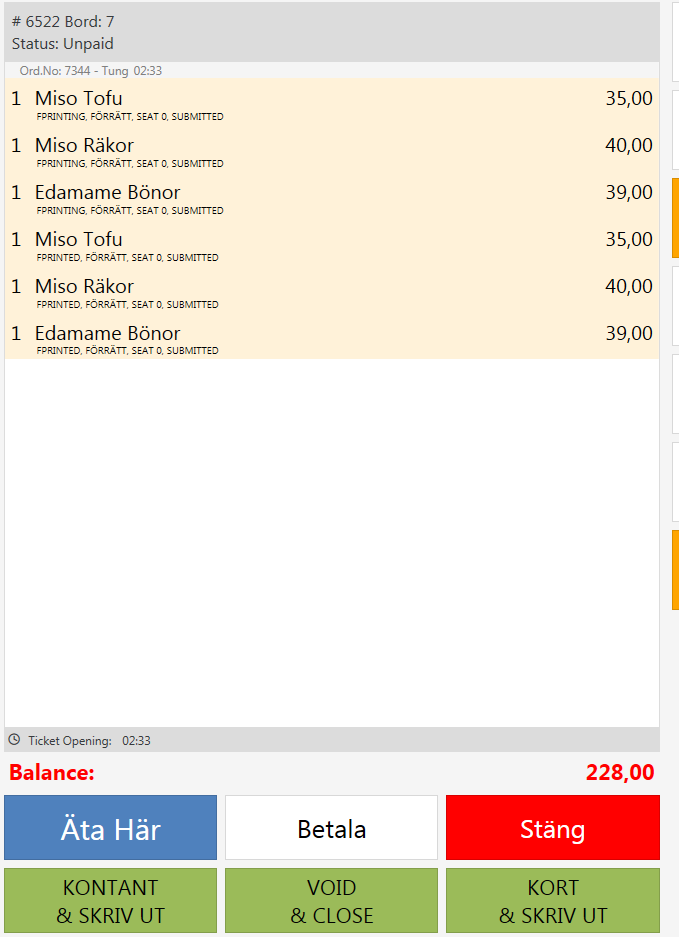 As you can see here, its only show up 1 Miso Tofu, 1 Miso Räkor, and 2 Edamame, but i made an order of 2 of each… And the behavior is very random…

i dont know where to start looking… 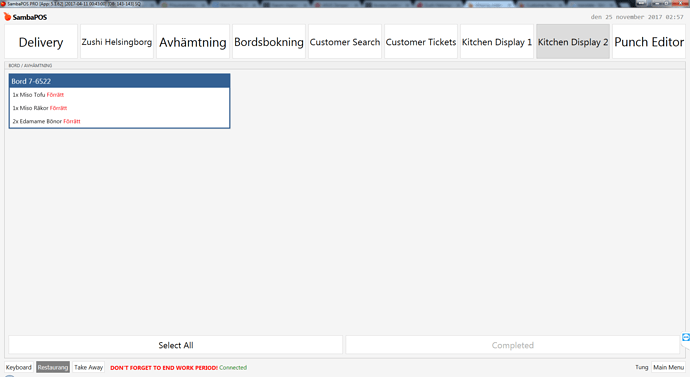 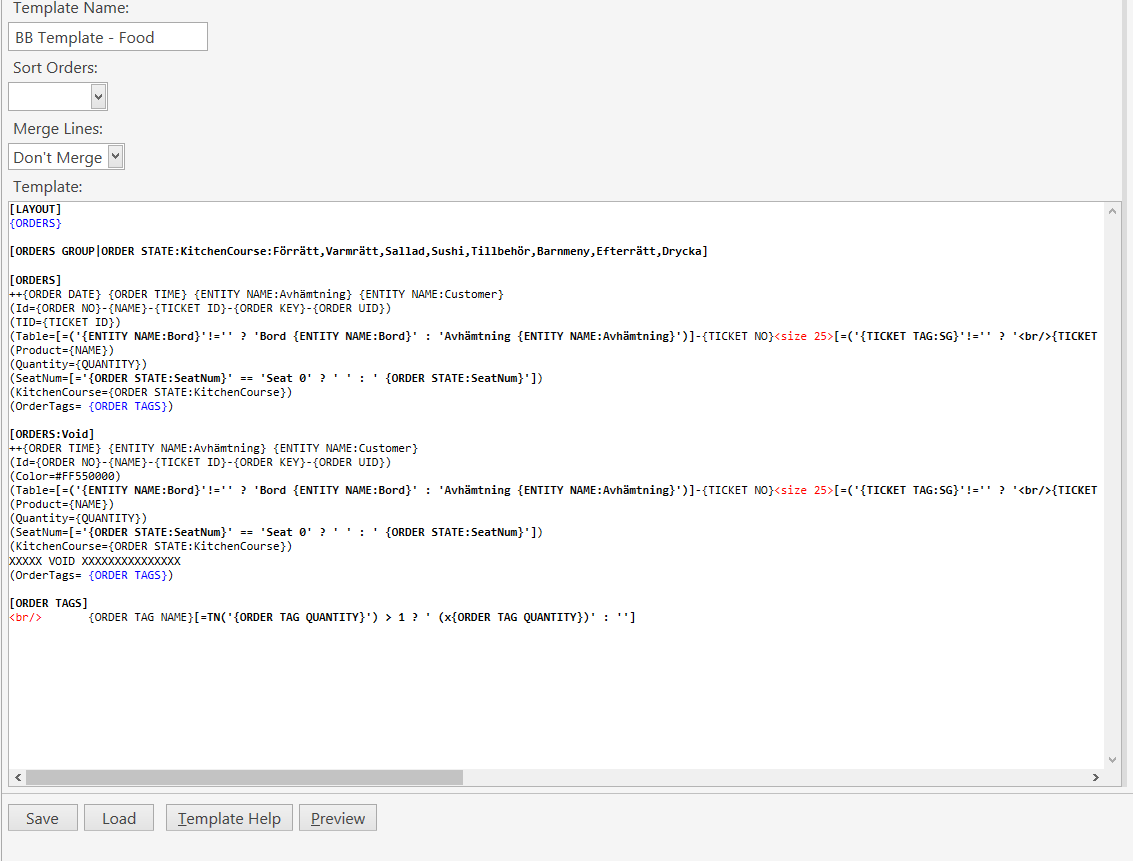 image.png1133×861 34.9 KB
Here is the template that he made for me for the kitchen display…
Hope that some one can help me to figure out what went wrong with this…

I also have this problem that the orders is not sorting as starter, main, dessert… i comes after the order clicks… Does anyone knows how to sort those orders?

Right click on the ticket lister widget and show the settings of it. Likely you have a filter of some kind. It probably has to do with the FPRINTING AND FPRINTED states.

What version of SambaPOS are we dealing with first? 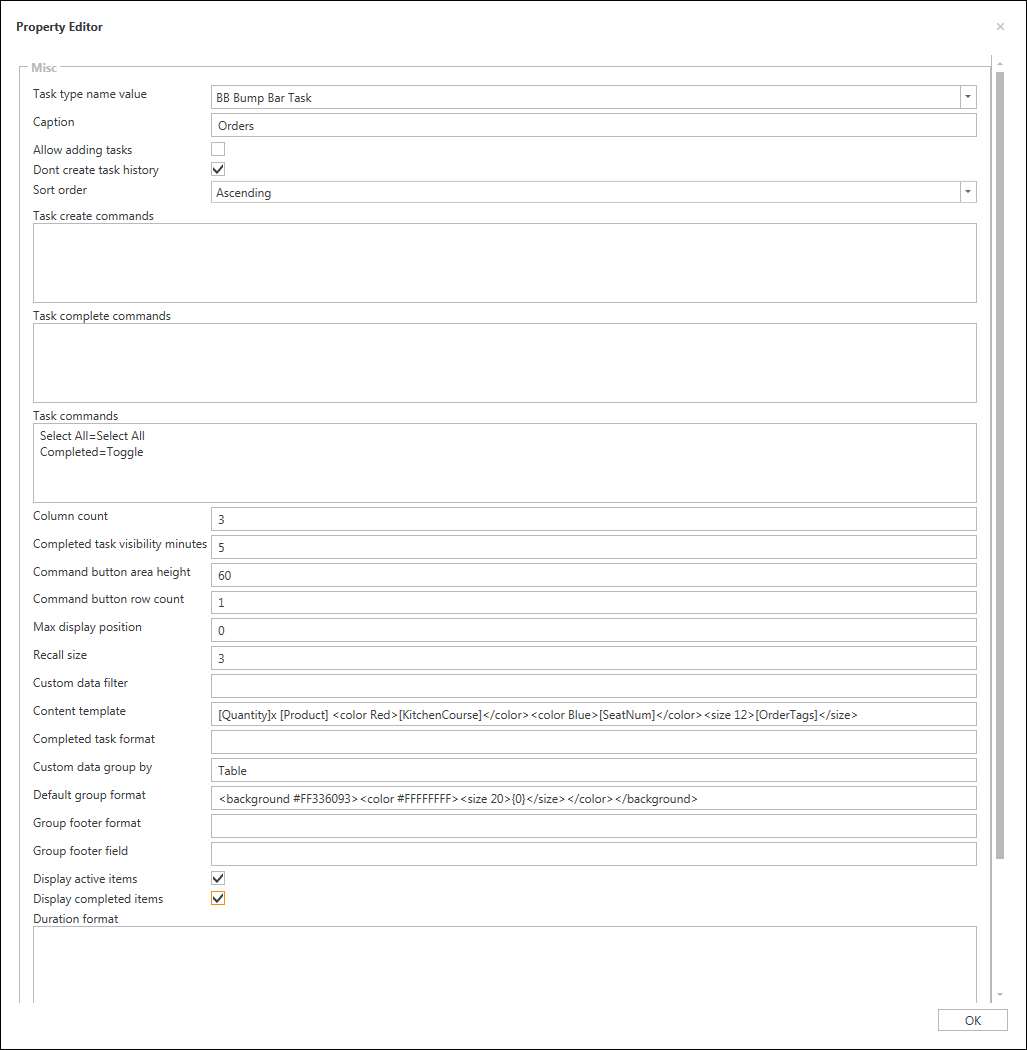 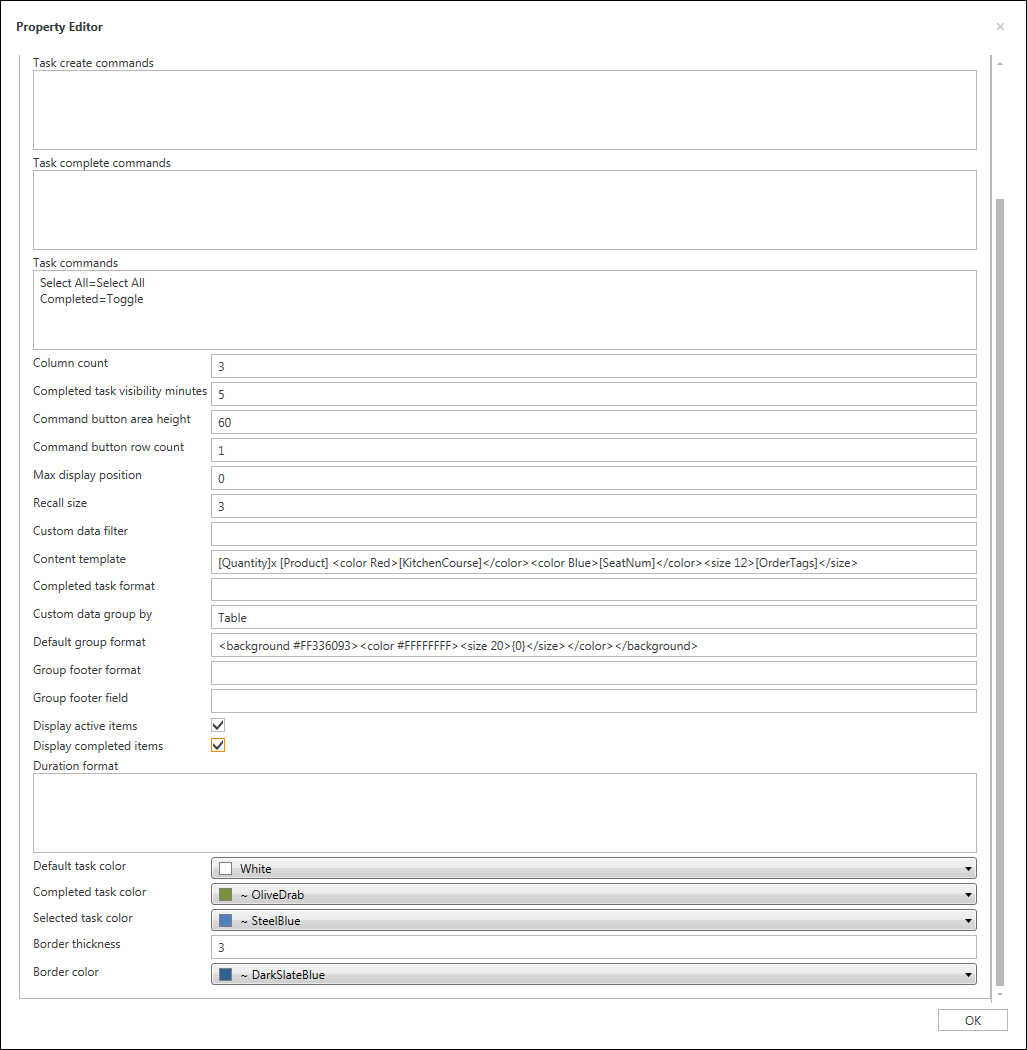 image.png1027×1050 28.7 KB
Yes, i also found out that its something wrong with the FRINTING AND FPRINTED… but dont understand why they shows different states when i placed the orders at the same time…
Jesse November 25, 2017, 3:13am #4

Ok so you are using a task based Kitchen screen. Good that is superior anyway. So now we need to see some of your rules. Show us all rules that deals with FPRINTING and FPRINTED states.

It has been a while since I looked at a task based kitchen screen so I am not familiar with which rule controls creating the actual task, but my guess is that rule is what you need to show.

Your best resource will be to look at the tutorial @QMcKay built for the Task based Kitchen Screen. You might be able to find what is wrong with yours. 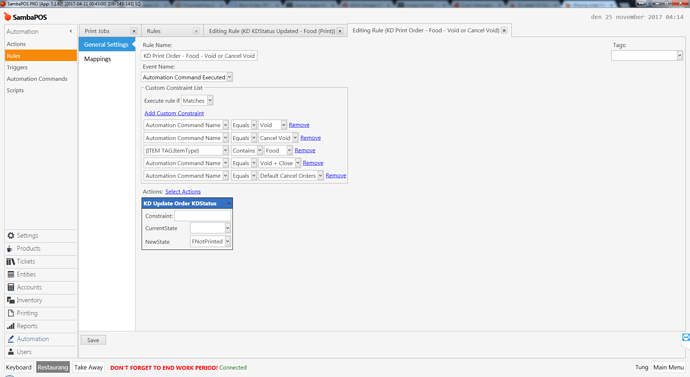 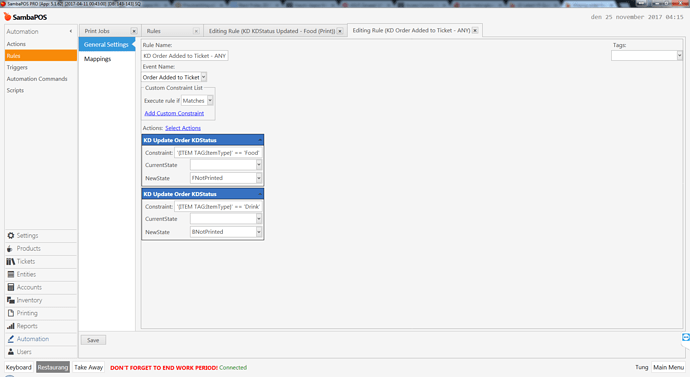 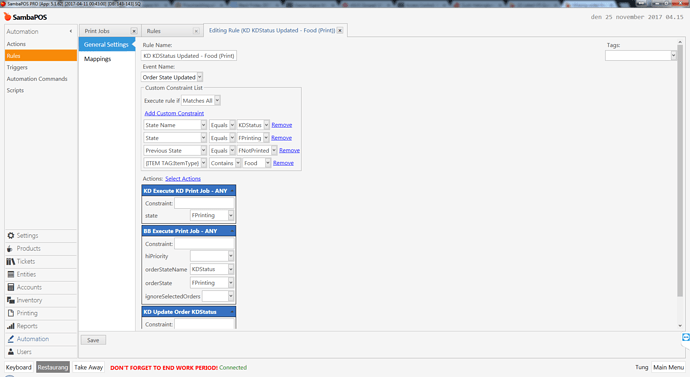 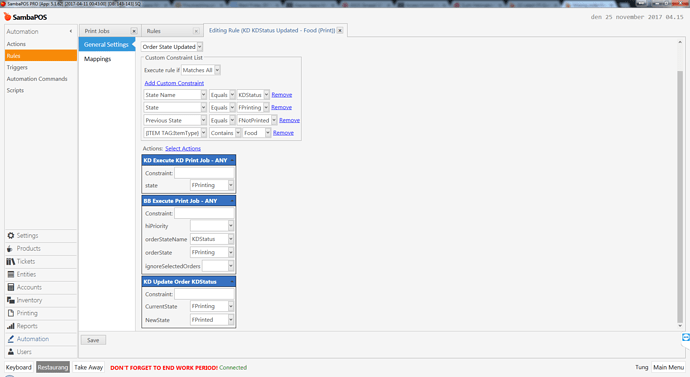 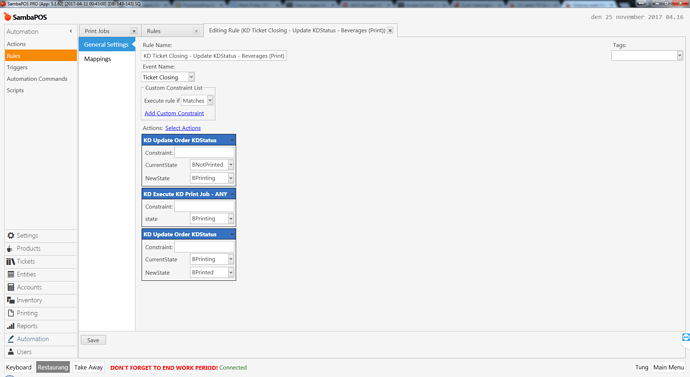 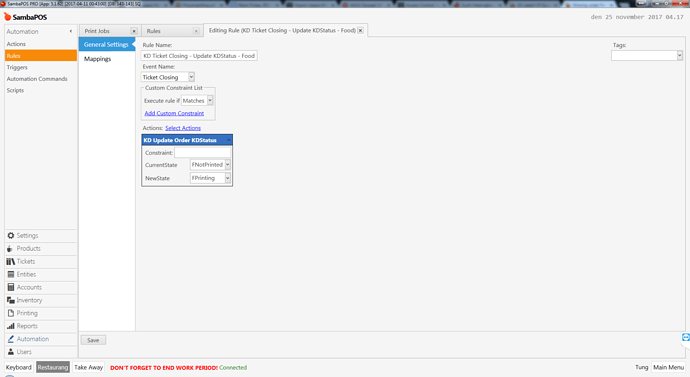 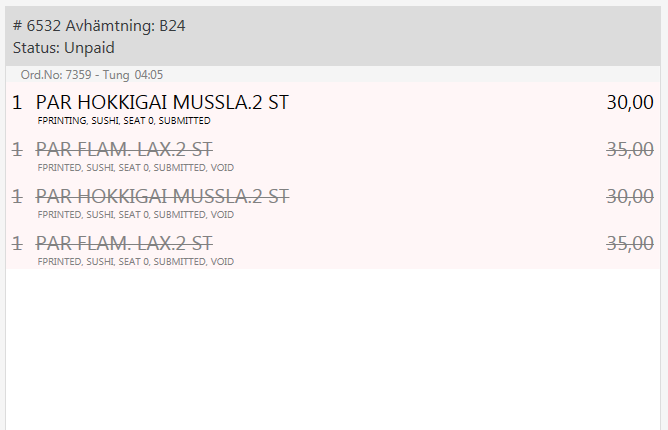 Well you do have a constraint that says Void + Close which is not valid. Likely that could be causing the weird void behavior… as far as the not printing some items I am still looking.

I have just tried to add BB execute Print Job with order state Fprinted, and it seems to show up the unprinted items… but i think its not really is the right solution to make it work, right?

No that is not a good idea. That will duplicate tasks. Those orders… were they entered at the same time or did you close ticket then reopen it and add more?

they were entered at the same time, and its really strange that they have different states

Also it appears he set it up to use Item Tags… instead of Group Codes. try changing it to just {GROUP CODE} Equals Food instead of {ITEM TAG:ItemType} Contains Food

Again your best bet is to read the tutorial I listed and compare yours to his. Try fixing the differences.

yes, i have changed it, but still the same some orders still show Fprinted, and some Fprinting after i closed the ticket

You will have to enter new orders to test it wont fix old ticket.

Ok it will be very hard for me to identify the issue without actually seeing it. I highly recommend looking at the tutorial linked and try to compare and fix differences. It could be a different rule interfering as well its hard to say.

yeah, i guess i still have to try to compare to the tutorial to make it working…

since i had no high skillz with sambapos, i thought that it would work if i paid some one for the job, but maybe i still have to try to understand it after all

its really time consuming when im not used to this.
But thanks anyway for you help!

Who did you pay if you dont mind me asking? Is that person active on here?

its really time consuming when im not used to this.

Yes it can be but its very rewarding as a business owner. Take your time and remember some key rules, 1. Case Sensitivity is important if you see something in a tutorial you need to type it exactly like it shows. 2. Spelling is important as well.

If you get stuck come here we will help just be detailed so we can figure out where you are in the tutorial and where your mistake might be.

yeah, hes actually pretty active here in forum, its “markjw”, our project was this “kitchen display” and “gloriafood intergration” was started since augusti, and it took 2 month before we actually installed the kitchen display and gloriafood…
the gloriafood intergration from him was not really user friendly, it was too many missing parts, like the pickup time, and the customer name didnt show up on the ticket, and i still had to sit 3 nights on forum to find out how to make it work on my own system.

But the kitchen display is way more complicated and its hard for me to find out how he made the rules, and actions…

yes, thanks alot for your help, i will take time and try to understand the kitchen display more… and until today, i have to say that sambapos has really helped me alot with my bussnies it saved me alot of time and money!! <3