I want our client to use the tablet, and I have this menu as the main menu 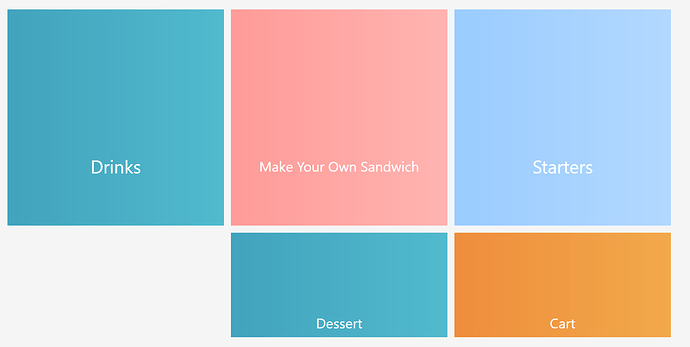 but when I click on “Drinks” it keeps creating new tickets, how can I make it Create a ticket or open a created ticket?

Think you’ve gone about it the wrong way. Probably would have been better using menu switching and custom menu item buttons like Richs retail setup.
If you insist on using custom nav menu you would need to make it reopen the ticket it just closed.

Would you help me do the correct way like you said Richs setup?

Ive never done a setup like his, you have to follow his tutorials if you go that route but they are quite thorough.

@kendash is this what you meant from the other post where you said we could (for retail) not have any menu shown we could instead add automation commands to products to have the “menu area” set up like a retail system so all the buttons such as price change, discount, payment etc are in the “menu area” instead. I have created a dummy product called price change and assigned the price change automation command to it but it doesnt work, is this what you meant? My thoughts were that as i have add…

I’m sorry but which part is related to what I want? couldn’t find it

which part is related to what I want?

The part about using menu item buttons for automation.
If not maybe search for fast menu switching.

You haven;t really explained how you want it to work so can only guess…

I want the main menu to have buttons, each button will “Change Display Menu” and “Display Ticket”

Now my struggle is how to tell the button which ticket to open because I don’t want it to “Create Ticket” when there is one open already.

And I want it to “Create Ticket” where there is no ticket created.

So basically if I have 7 tablets in the restaurant controlled by 7 clients, I want 7 tickets to be opened

Does it make sense?

OK,
the route your taking might seem simpler but is going to create all sorts of additional issues.
You solve getting back to menu by closing ticket.
Even if you setup reopening the previous ticket you next issue will be ticket flow… If using a kitchen printer youll need to creat custom flow to prevent sending each set of items when ticket is closed.
Also if you want cancel for customer youll need to create custom void flow as orders will be submitted.

There was a self service topis a while back but cant find it.

You would havesay a menu for each set like you do but create a main menu which has only the 4-5 selection buttons you show on nav screen shot.

You then setup a full screen ask question say start new order or something which creates new ticket and switches to main menu.
Youll then need a final ticket closing rule to restart the process by bringing back the ask question.

So basically what you’re saying is a button to ask “Do you want to place an order now?” and trigger it on Login and “Yes” will create a ticket and then he can choose which menu he wants, and the buttons will just “Display Ticket” (Btw, how do I set the Display Ticket ID?)

That makes sense, am I correct?

and the buttons will just “Display Ticket”

No the ticket will remain open.
Instead of menu products on the right you will start with large buttons like on your nav menu which switches screen menu but open ticket remains open on the left.

And how would I be able to link custom buttons to automation?

And how would I be able to link custom buttons to automation?

That what @JTRTech link you to but you don’t want to learn.

It doesn’t sound relate to your setup but think about it we only have handful of action so, it may be relate somehow.

I get it, but I don’t know how to link the button from the actual menu to a rule or an automation command.

I couldn’t find how anywhere

I get it, but I don’t know how to link the button from the actual menu to a rule or an automation command.

I couldn’t find how anywhere

It is in there you have to find it. There is only way Rick can add automation button on menu area. If you have no time to find it, I can set it up for a fee

You can create buttons on nav screen in settings>automation>automation command button.
Create a new button and map it to nav screen.

Create an action to navigate to different screen

Create new rule with Auto Command Executed and constrain
Auto command value equal (name of button u created) then select action and pick the action you made for it.

Now that button will fire that rule which will execute the action to navigate elsewhere .

This is just one example

Dear, I want to make a button to be display on the POS screen above the actual menu products

Ricks tutorial.explains and show how to add custom buttons to order screen.
You will also need to create those rules and assign that rule to that custom button

Rule creation and action creation still needs to be done the same way for those custom buttons.

Ricks tutorial.explains and show how to add custom buttons to order screen.

It does, but which rule do I use?

You create a rule… but before that you have to create an action first. Tht action is what will occur when the button is pressed. You put that action in the rule you create.

I mean, Event Name, which event is triggered when a “Custom Button” is pressed?