Retail Setup with No Menus - An alternative POS screen layout

@Jesse is this what you meant from the other post where you said we could (for retail) not have any menu shown we could instead add automation commands to products to have the “menu area” set up like a retail system so all the buttons such as price change, discount, payment etc are in the “menu area” instead. I have created a dummy product called price change and assigned the price change automation command to it but it doesnt work, is this what you meant?

ideally if we can do a set up like this it would be great for retail, setting up dummy products to assign automation commands to so that they appear on the menu area instead of having any menu/categories showing as these are not needed for retail when we will just scan a barcode. this way we could create a “retail” screen where the menu and categories are with all the pos functions such as price change, discounts, payments etc etc or am i using the automation command column in the product editor incorrectly? or is just not designed to work like that? 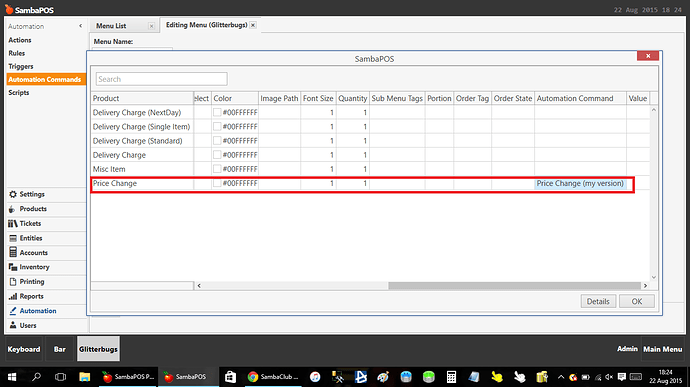 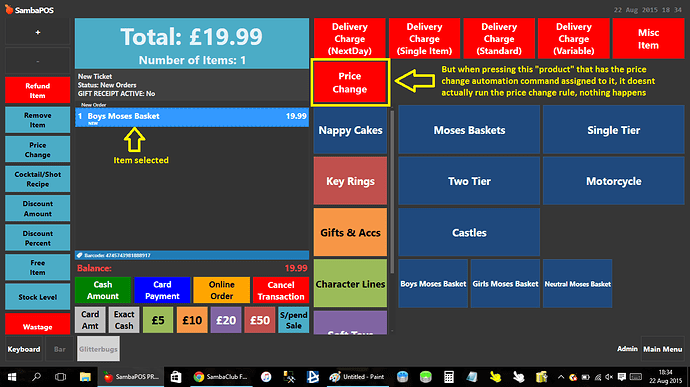 Am I missing something. Isn’t that column category?

Edit! OK got it, it is fast menu. It doesn’t work because that price change is product itself (I think it change itself price, not Boys Moses Basket). I saw you have price change on automation button (left column). It will work there.

Use Order Tagged event to build your automation for order line commands.

The effect will be when order selected your POS menu on right changes to Order Line commands. Price Change, Void, No Tax, etc. Ticket based commands or system commands can be the actual menu and products/quick menu. You could even use Suffice/Prefix for reasons etc.

@sukasem ive got retail and bar setup in one database at the min so with the retail setup i wont have any of the order line buttons on left hand side and no menu/categories on the right. Instead ill have my ticket auto commands on the right hand side (where the categories and products are now) and orderline auto command setup as @Jesse suggested above

@Jesse i take it then i will still need two screens? The main screen with all the ticket auto commands on and the order tag screen that appears after selecting a product from ticket to open the order line auto commands?

BTW @rickh you can automate database swaps… if you wanted to make command buttons for switching shops one press would swap databases so you wouldnt have to run on same database.

i take it then i will still need two screens? The main screen with all the ticket auto commands on and the order tag screen that appears after selecting a product from ticket to open the order line auto commands?

For that example yes. It makes sense and would be smoother operation with less chance of mistakes on operator side. I mean no accidentally pressing ticket based command while order selected. No accidentally pressing order based commands on entire ticket when no order selected. And the change is seamless simply select the order or deselect the order.

Yea thats something i still have to setup but wanted to do all the main setup specific to both then separate so that i dont need to copy things across or build them twice, just thought itd be easier to complete main setup first then copy database, rename for my retail setup and delete the bar department

For that example yes. It makes sense and would be smoother operation with less chance of mistakes on operator side. I mean no accidentally pressing ticket based command while order selected. No accidentally pressing order based commands on entire ticket when no order selected. And the change is seamless simply select the order or deselect the order.

Makes sense, thanks again and if i get stuck with anything ill give you a shout (its always the simplest things i mess up haha)

BTW if you wouldn’t mind sending me a copy of your database I had some ideas I wanted to try using some of your setups. I accidentally erased the last copy you sent me.

also having some probs with the auto commands, none of my ticket ones seem to work, open drawer, abort (cancel transaction) when pressed nothing happens

it would be a good addition from a retail setup that if a product has an auto command assigned to it, it doesnt then add that product to the ticket it just runs the auto command instead, i dont know if thats doable or if it will affect other setups?

Try adding cancel order action into same automation command put it at top of list of actions in the rule. This is unconventional so would probably need to do a few tricks

cheers ill give that a try, just on phone to our internet provider as it keeps dropping out

thats one kink in the process sorted

you couldnt show me how to link the order tag to product so i can get that working could you, im obviously not doing it right

Add a mapping to the Order Tag Group for the Product(s). 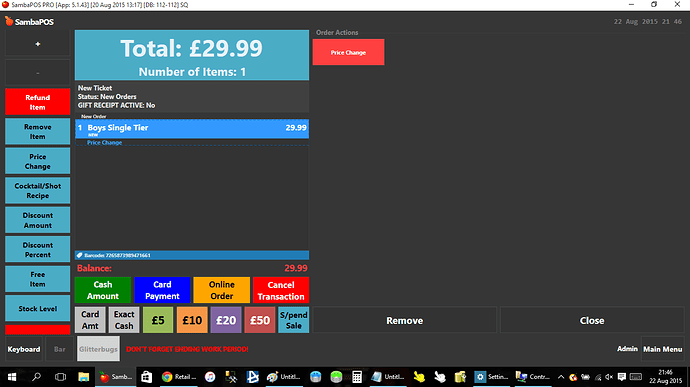 Use Order Tagged event for the function you want. Are you using it to launch another automation command? If so there is no need instead run your actions and constrain it to the tag name. 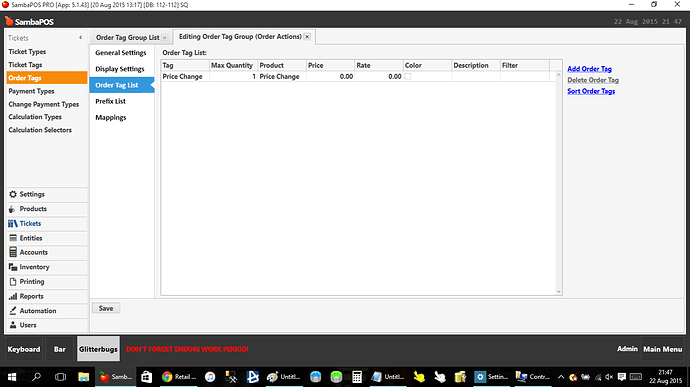 yea, so when i click an order i need all the order “functions” to show which will launch auto commands eg price change, discounts, etc

No need to launch commands. Use order tagged event to do it all.