Continuing the discussion from Barcode Open Ticket Scanning To Cash Out Customer:

yes, I will work on it, and then tell you the result

Did you have any luck with this. I believe I am having the same problem as you. I am not trying to open the payment screen just display the ticket. I am closing the table and then printing the bill. The printer is printing the barcode for the ticket ID correctly and the scanner is scanning it correctly ( I can see it flash on the screen) but it does nothing. Its acting like when I scan a barcode that is not in the system. When I scan products it works fine. I seem to have duplicated all the screens except for the ones that lead to the payment screen. If you got this to work please let me know and if you didn’t I will post some of my screens and maybe we can get more help.
Thanks,
Todd

Show your rules you setup to handle the barcode? You must have Display Ticket action inside Numberpad Value Entered rule for it to work.

If you do not have that setup then that is why it is not working. You can not just print Ticket Id as a barcode and scan it expecting it to popup. You must tell SambaPOS what to do with that barcode. 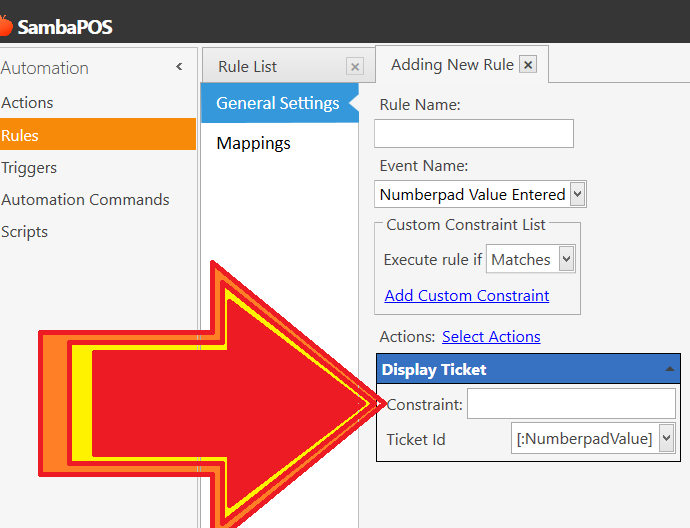 Yeah people will probably wonder what is wrong with us lol. Really funny.

Me too, before I always circle but now I’m using arrow too

I love the arrow, I will post screen shots soon. I was at other job yesterday and was too busy today. Now back to other job. I appreciate all you guys do. Thanks again

I have that exactly except I have the rule name as “OPEN TICKET WITH BARCODE” I don’t know how to post a screenshot. I have it mapped with *'s everwhere. Do I need to enter something in the Constraint box? I have the Ticket ID [:NumberpadValue] like in the box. Thanks.

Press Print Screen and then paste it in the post box here.

Your barcode scanner… open notepad and scan a barcode does it output into notepad the number?

Press Print Screen and then paste it in the post box here.

You can past straight from print screen?

Yes it works very well. The only hiccup is if you use multi monitors then it will paste all of the monitors lol.

multi monitors then it will paste all of the monitors lol.

which leads to some MASSIVE screenshots

I just paste it in Paint and crop the other 2 monitors out.

The windows snipping tool is what ive used to date.
Has free select, window select and screen select options, gives basic drawing tools before save as png.

printed a bill (ticket), barcode printed fine. I opened notepad and scanned the barcode and it read it fine. It matched the ticket number on the bill. I’m still fiquiring out the print screen feature.

Press Print Screen on your keyboard then open up a post here and press Control + V keys or right click and press paste.

Alternatively if you paste it into paint and edit it and save as a file you can do this.

You will see a small text saying its uploading once its finished then press save or reply button.

I have that exactly except I have the rule name as “OPEN TICKET WITH BARCODE” I don’t know how to post a screenshot. I have it mapped with *'s everwhere. Do I need to enter something in the Constraint box? I have the Ticket ID [:NumberpadValue] like in the box. Thanks.

Does the number get ‘typed’/scanned into the numberpad box?

Once he provides screenshots of his action and rule we will know whats happening. 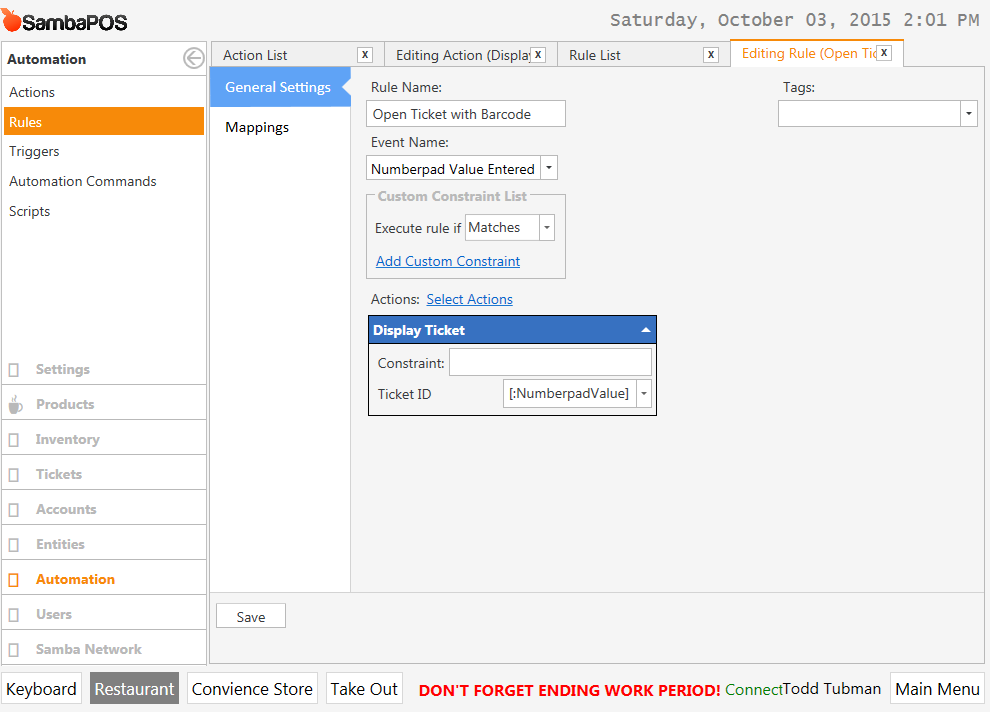 Can you show the action?

EDIT: Also are you in POS screen when you scan it? There is no other ticket active before you scan it, correct?

sorry I keep having to switch back and forth my network