I’m looking for a way to pop-up a window to select portions or tags.

Now, for coffees, when I Select cappuccino the small size comes by default, i need to make 2 additional clicks if I need to make it large (select cappuccino choose size) problem is that some times wait stuff forgets to select. Especial with stakes is very annoying because they forget to choose cooking option (medium, rare, well done, etc)

It would be great if you give a solution for tags and portions as I’m going to use them both.

Thank you in advance

Tags you can enabled min selected. For forcing portion selection you would use ask question triggered from item selection. I can show you later I am on phone right now.

I am working on some quick tutorials for you to setup an ask question action for your portion size, however you do not need a popup for Order Tags to force your waiters to select tags. You can use Min Selected. Example of this is in the tutorial for Order Tags located here:

You can use Order Tags to define modifiers for menu items. With SambaPOS V4 you can define global, product group based or product based order tags. Let’s see how it works.

I’ll start by defining Global Modifiers. They will work for all products in my menu. Navigate to Management > Tickets > Order Tags and Add a new order tag group.

Ooh, I thought that my post didn’t go through and I opened a new one.

Thanks for reply. I fount the opltion for compulsory selection from order tags / general settings. Choose min selected items.

That solves the problem with forgotten option. I’m still wondering if we can have auto pop-up windows.

I’m very new to the system but I like the endless configuration possibilities (this I kick out the current one). I’ll try to figure out how and I’ll post here the results

Having a popup for order tags is redundant when you can use min selected… you can make a popup to force portions selection however. I am prepping a quick tutorial for you now on how to tie Ask Question Action in with menu item selection to force portion size.

Thank you very much… I already loved the software and now I love the community.

Here is a quick tutorial to get you started. 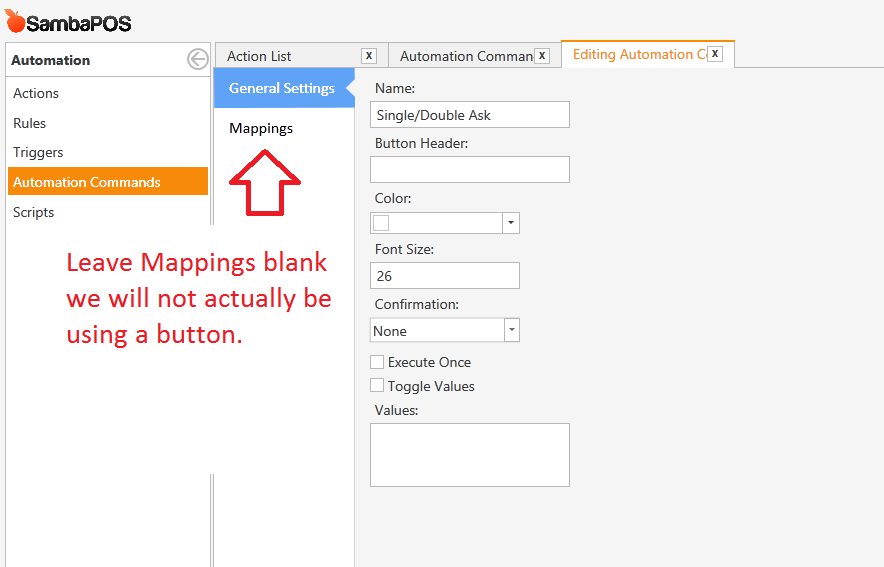 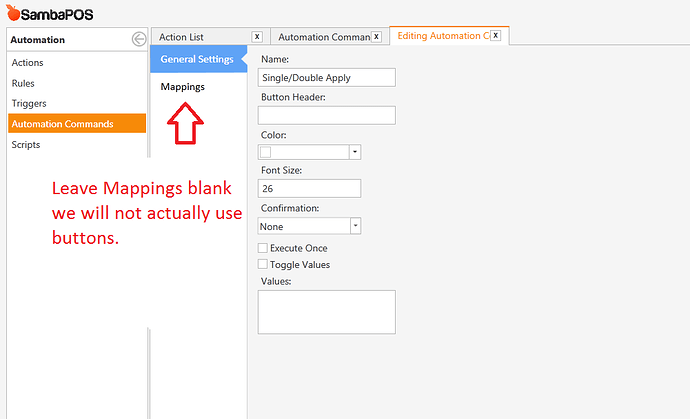 Make an Ask Question Action:
IMPORTANT YOU MUST USE YOUR EXACT PORTION NAMES FOR COMMAND VALUE 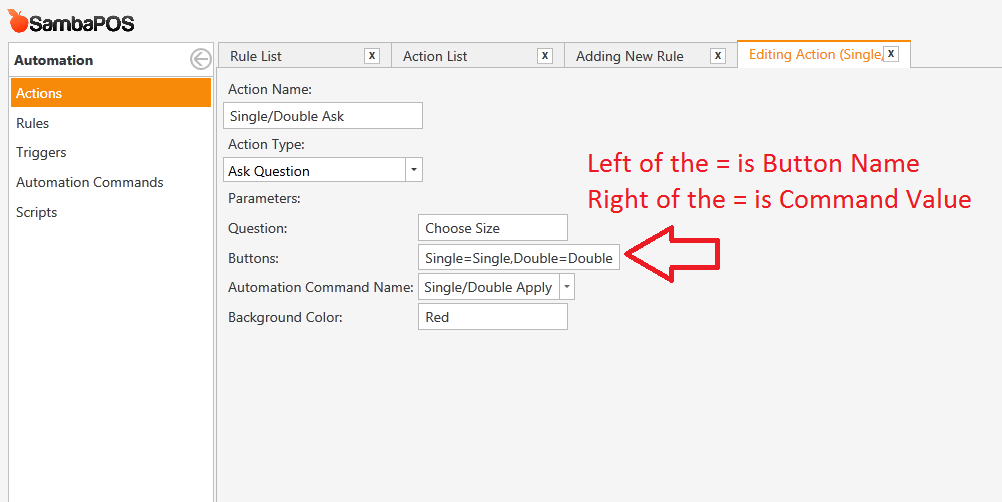 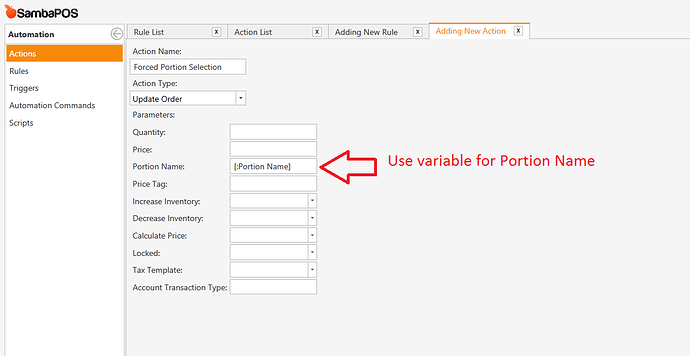 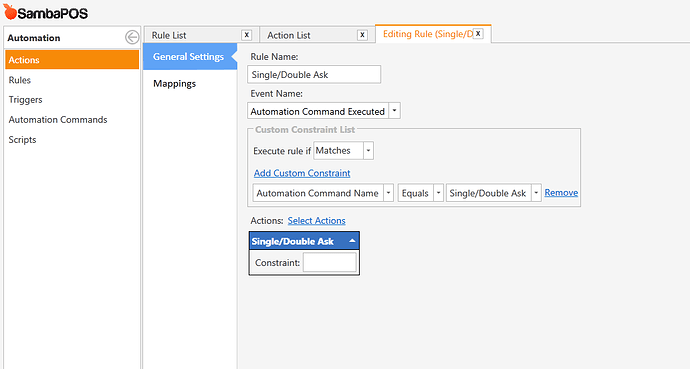 Create a Rule to handle the choice from the question popup:

Now tie it in with your menu item: 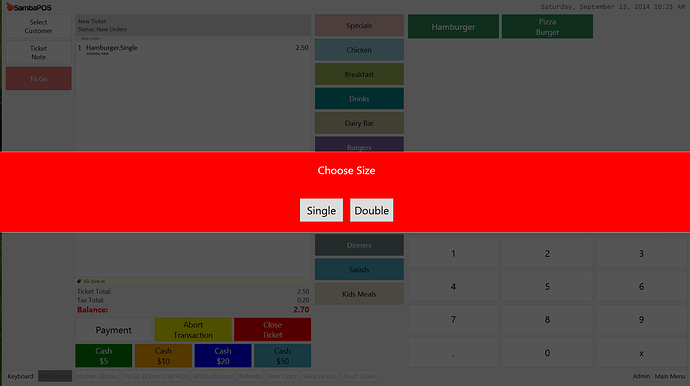 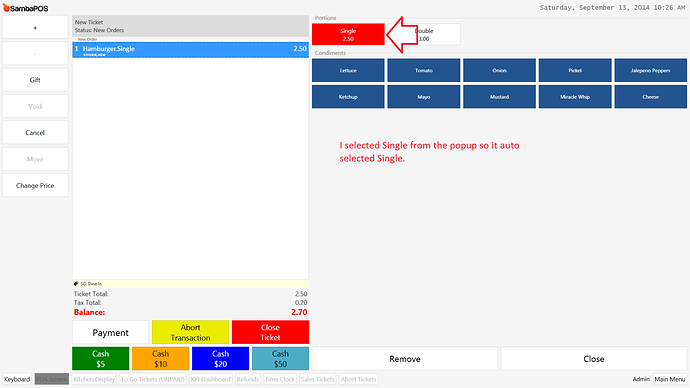 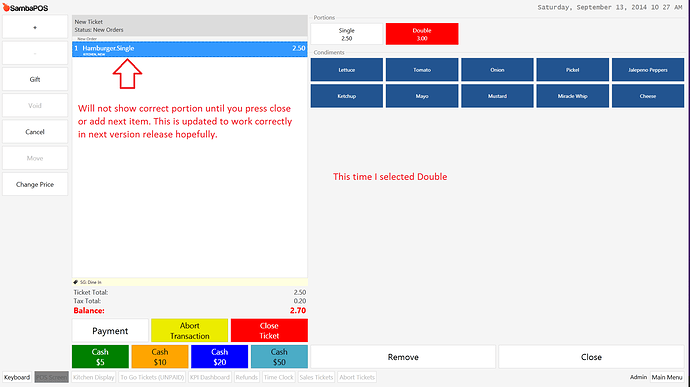 Just understand that until next update it may not reflect the change on the ticket screen until after you finish adding the rest of order tags or you press close. This is a known issue but @emre has hopefully fixed it in next version.

Thank you very much. I appreciate your effort to help me and it works About 90%… Well the rest of 10% is that I don’t see the red stripe (box) to select.

So far when I choose a pizza the portion tab comes automatically. This is good for me

any idea what I might miss here? I have been up and down on your tutorial about 5-6 times. Checked again and again but I can’t see what I miss.

At the moment is a great way to alter screens without the need of extra clicks.

Thank you very much again

The one you map to Menu should be the Ask one

Basically you are actually triggering Ask Question action not the Action to change Portion… the question itself is triggering that. It sounds like you reversed this.

Ooooh ok. I haven’t mapped anything. Your screens say to leave map empty. I’m gonna check it now. Thanks

NONO when i said map… i meant map to your menu item… the LAST screenshot I showed. Leave the mapping for commands blank just like I said.

NO you write it exactly like I did. This is the variable. it allows you to set that value within the rule instead of the action. And the way I set it up for you the command value will determine what is actually used there.

AGAIN start with step 1 of my tutorial DO NOT SKIP anything. Expecially where I said make TWO automation commands both named the same… only difference is one says Ask and one says Apply. THen follow the layout of the rules exact… some of them are linked to the apply command some to the ask command.

Also I did not mention it because it is usually understood, however the two rules need default mapping. All rules need mapping to work.

EDIT: Its actually good that you did something wrong because this exercise will get you familiar with this system better.

Oooo yes… That was the problem… I didn’t make default mappings.

Yes , you are right. I learn more things like that. In fact I want to master sambapos. That was a good starting point.

Ps. If I choose large from the red window and then I close the portion menu the price is been updated. I don’t have to choose it again

The reason it is taking you to the portion screen is because you have not chosen the order tags yet. This method auto selects the portion for you based on what button you press. It then leaves it open to choose order tags.

If you have no order tags… or you want to add order tags by selecting ITEM AGAIN you can simply take Auto Select off in the Menu Item Properties. However selecting the item again if your using order tags is the redundant part if you ask me.

Ps. If I choose large from the red window and then I close the portion menu the price is been updated. I don’t have to choose it again

Yes this behavior is working. What I meant was it does not update it live you are forced to press close to update it… This will change so it updates live. You will know why its important when you disable Auto Select and force it back to menu select screen. You will notice that it did not update until you add another item or press close again.

I have done this tutorial but i get an error when i select my option Print screens is attached. 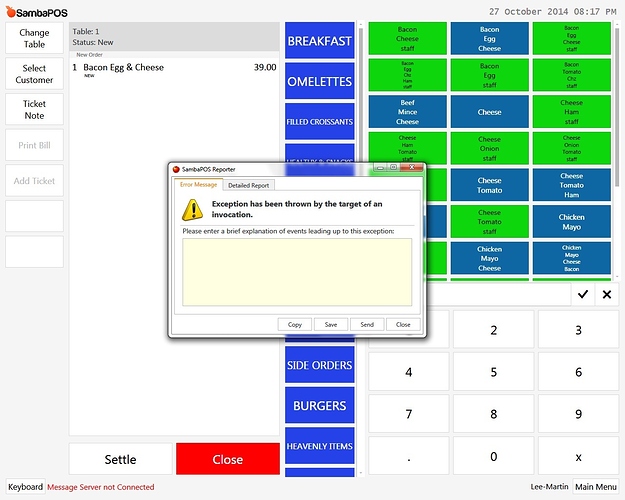 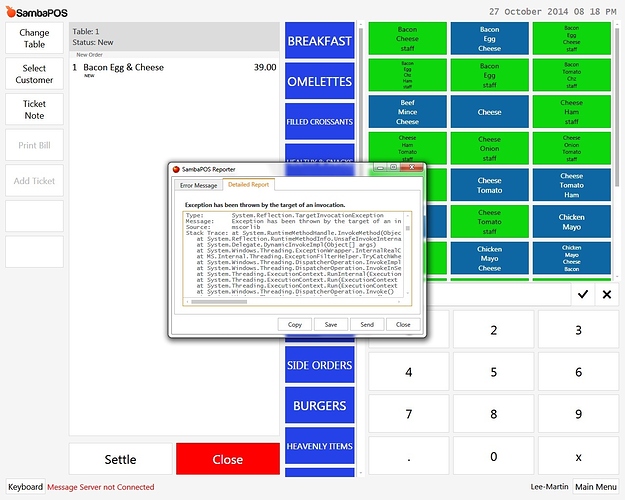