Sorry to bug you guys again but

I find that a lot of users get the server installed and running just fine the problem is they dont realize it. They get hung up when trying to connect a second computer to it and I have to say Windows in general is at fault for that. Windows default setups like I said are configured to block this type of setup. You have to enable it and allow it to act as a server when it really just wants to be a desktop.

Windows server editions are built the other way and typically they come out of box ready for networked server applications and can be easier to configure in this regard although they are infinitely more complex with options.

All that said though there is an endless amount of documentation on the web showing very detailed instructions to get SQL Express as well as other basic networking working for you.

I have reason to believe the server has been successfully setup on the host pc… the activation now says it’s unactivated but I know how to fix this. But this is what I’m getting on station 2 when trying to connect. I put in the exact same thing for the connection string that worked with the host pc. I do have connections enabled on sql settings is there something specific I should check for and change because it looks like to me the server exist. But the client is not finding the sql server on the host pc. 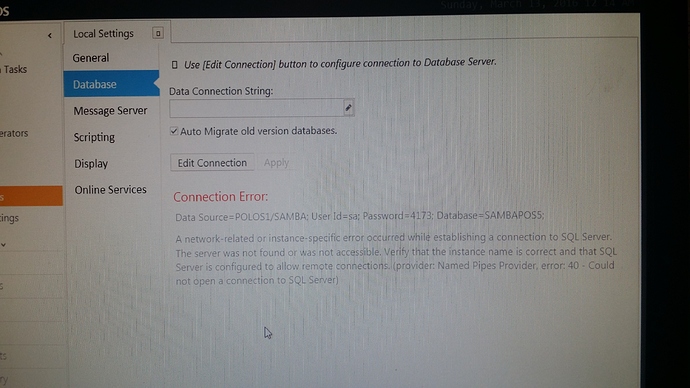 Turn off Windows firewall and try using IP address instead of ComputerName.

Well now the messaging server on main pc is not connected. I used the default 8080 port and it connected fine the first time now it won’t connect. It keeps saying message server not connected at the bottom when I try to connect nothing happens. How do I find the right port to use? I’m wondering if this is the issue. So before I can do anything with system 2 I need system 1 (host) message server running again. All I did was restart the program after reactivation samba. The db migration caused samba to go back into unregistered mode. It’s activated now and still running off the sql db but message server isn’t running now. And I don’t remember the port # I originally used when I installed sql. Like I said I’ve always used the default 8080

Disregard the last message. The msg server is now connected. Let me try directly connecting to the computers ip address.

Connected to the ip address still says the same thing but I’m sure the server is up and running on the main pc. Anything I should check and give you info on?

I’m sure the db is correctly configured on host system but I get the same error when trying to connect on system 2. I’ve even turned the firewall off and tried a direct connect to the computers ip. I’m assuming there’s still a simple configuration or setting I’m missing either in samba sql or firewall.

From the screenshot you posted, you have the server name POLOS1/SAMBA with a / (forward slash). Network names use \ (back slash). It should be POLOS1\SAMBA.

Can you connect to your database using Microsoft SQL Server Management Studio? If so show us a screenshot once connected.

It’s connected. Ill attach some pictures I took last night before I went home. Hopefully they will suffice and maybe give you an idea on why I can’t connect from the client to the main pc. 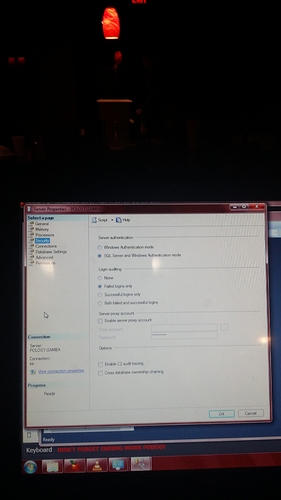 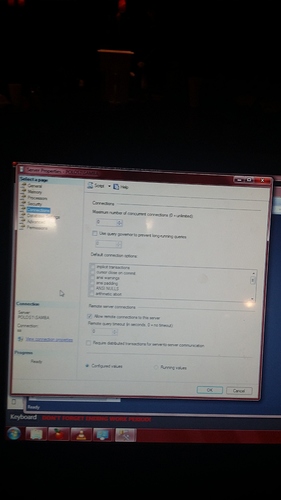 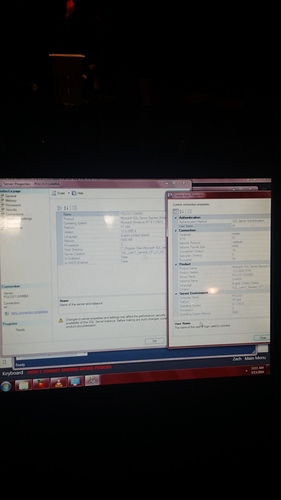 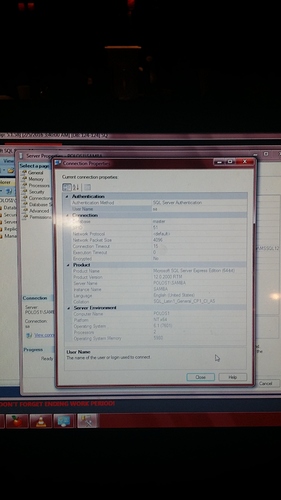 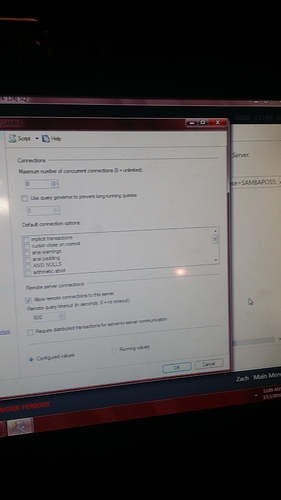 If I wasn’t connected I wouldn’t be able to get into management studio. It says it’s connected.

Yes but I just wanted to see the screen after login not all the setup stuff. Btw just hit PRint Screen button on your keyboard then paste it in here with control+ v.

We do not use this computer for the internet so that’s what I’m having to take pictures with my phone. These are the only pictures I have and it will be Wednesday before I go back to the restaurant I was hoping to have a solution between now and then. Sorry I can’t provide anything else at the moment but when I start the management studio it connects when I hit connect and it says connected so I’m just not understanding why pc won’t connect to the host db.

Take a picture of your login screen in MSSMS before you login so I can see the instance.

Actually instance name is showing in the title bar of those screenshots. It looks correct.

Ok so his server is working so his next step is to read your post and check this post to troubleshoot connecting his client.

That last post helped a lot! Using that tutorial I was able to get the two systems connected! Thanks. If I need help with anything else I’ll be sure to let you know

mark i sent you an email at storeseen

mark i sent you an email at storeseen

I didn’t receive any email from you. You can also send me a private message on forum, just click my name and click Message.