This was a tutorial I did a while back but struggled to upload, apparently there was a corrupt frame so had to re-render it.
Anyway, its not a full step by step but a run through of a pre-configured setup for a customer.

It includes a points based on ticket value system which is automatically allocated to the loyalty card entity selected for ticket on payment.

Points allocation is logged on the ticket with a state.

I added the ability to enter the ticket number in an automation flow to claim unused points. This is like at tesco they can scan your receipt bar-code and your card to allocate you points if you didnt have your card when making the original purchase.

There is a button to show the current loyalty entity point balance and its discount value. The discount is manually applied to a ticket using this button. There is limits that discount applied can only match the ticket value ie not end up being a refund.

9 Likes
How can i do Loyalty Feature and get point base on total price
Loyalty program as a point system
Documentation for Version 5
Win a gift after 10 purchases of a specific product
Points Issue Help
Coffee Loyalty Points
Use Point button is not working
Gift Certificate Sales & Redemption (additional features)
Monthly members need to track and set coupon validity
[Ann] Best SambaPOS Features
JTRTech January 22, 2017, 12:44pm #2

Did you find this video useful?

To gauge the value of and demand for a possible new video tutorial section please mark if you found the video useful and would like to see more.

What is SambaPOS? Using the Forum History & Versions Is SambaPOS for Me? This was a video I put together a while back just going through some background information about SambaPOS. Video covers points like; Describing SambaPOS The SambaPOS Forum History, Versions & Requirements Is SambaPOS Right for Me? https://www.youtube.com/watch?v=pGJuRpgSNxk Tutorial Videos Basic Automation Tutorial Video for Simple Fast Cash Buttons https://forum.sambapos.com/t/basic-automation-tutorial-video-for-si…

USES: Ticket Tags, Display Ticket List & Ticket States So I thought I would share a simple little setup I did for a couple of the local bars I do tills for to help avoid using Customer Entities for short term temporary bar tabs. This saves having a cluttered customer entity list full of names which will not be used again. Using the ticket tag it allows the ticket to be closed without an entity and the display ticket list allows you to view and recall the open ‘Temp Tabs’. I also upgraded the…

Uses: Ticket Tags, Report Expressions, Ticket List, Ask Question This will likely end up as a mini series of 2-3 videos of the process of creating a new layaway/switch user setup. I have purposefully not rehearsed and only refer to a previous setup for rough reference as this is a new configuration I have made to hopefully be an improvement on my previous switch user setup. I believe that a few videos of this style will be beneficial for newbies in that its not always a straight obvious answer…

Thank you very much i waited so much for your video to be uploaded.

Sorry ti took so long, know there was a few people I had told I was sorting it, Ive had it narated and ready for a while but it wouldnt export due to the dodgy frame in the render…

Either way, hope it helps.

@JTRTech first thankful to you to share the hard job . I implimented this and trying since yesterday . What am getting error is if i have 500 points ($5) worth . And ticket total $2.50 which is 250 points used it should be 250 balance but going into negetive . (-250) .
If i chnage the action order bring the bottom one to one up
Same 500 points balance and used 250 the balance should be 250 but its become 0 .
This is what i noticed thanks again.

Hmmm, sure I had it tested and working…
It will only be in that one rule for allocating the discount and updating pooints.
If you show what you put, I think maybe you typoed it somewhere and both ‘set to 0’ action and deduct points actions are firing or maybe on the tag for points on points-(total100) making it 0-(total100)…

Here is the screen shot. 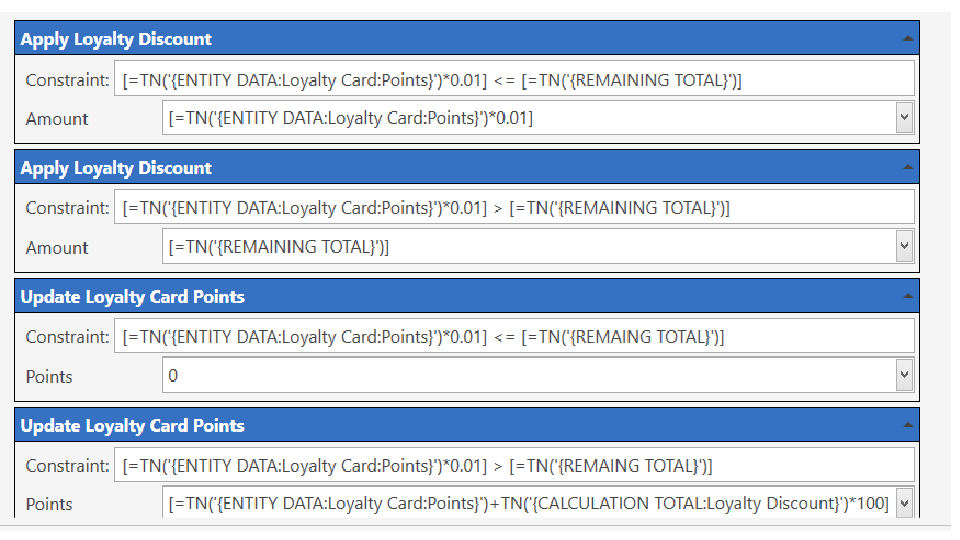 @JTRTech Sorry any update on this? Thank you.

Sorry for delay getting back to you.
Tested your senario on my system and seems to work as expected.
500 points (£5), £2.50 ticket, apply points makes ticket £0 balance and 250 points (£2.50) left
Just to clarify you not just reading as minus because of the - in entity display format are you? Just checking…

@JTRTech I have checked your video may be 3 times and compared exactly same I followed but not working for me , so I deleted all settings . I will do it again you know you gave me a exam like pause the video and follow it oh 4 nights any way I appreciate your job.

i watch your video and replay few times, very nice functions my customer looking for this in a bubble tea stores. i have problem with the total point for US$, for examples when customer earned 5000 point (but that 5k point worth $50) i can closed the ticket with $100 ticket but the point still remind show 5000 point after the ticket closed. 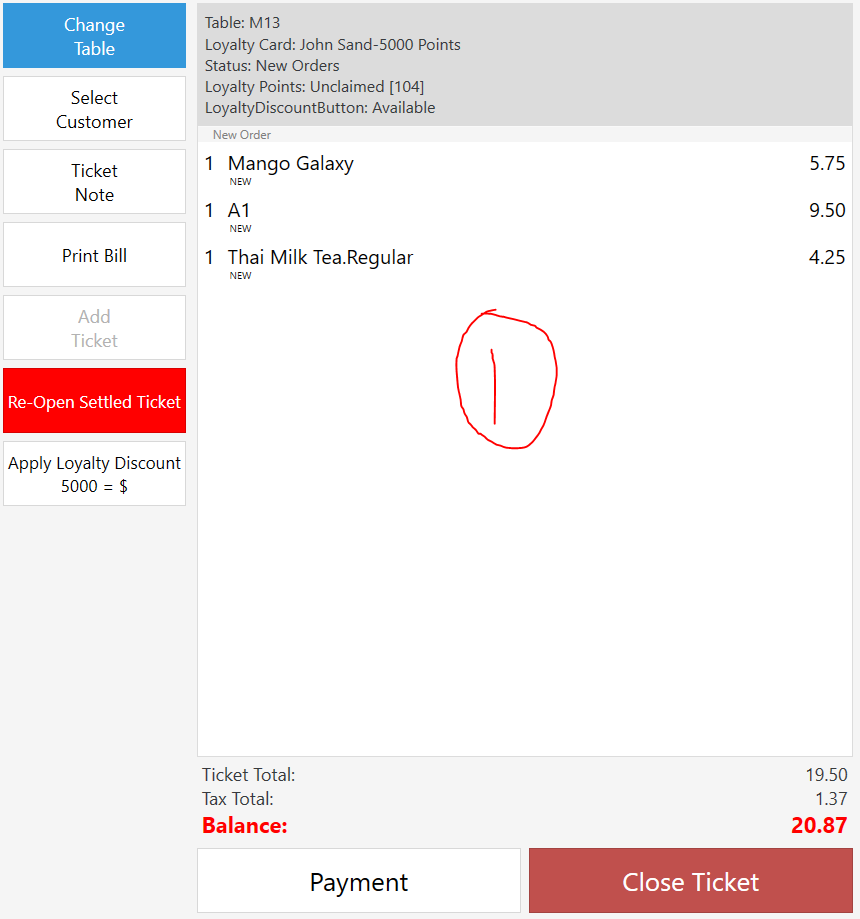 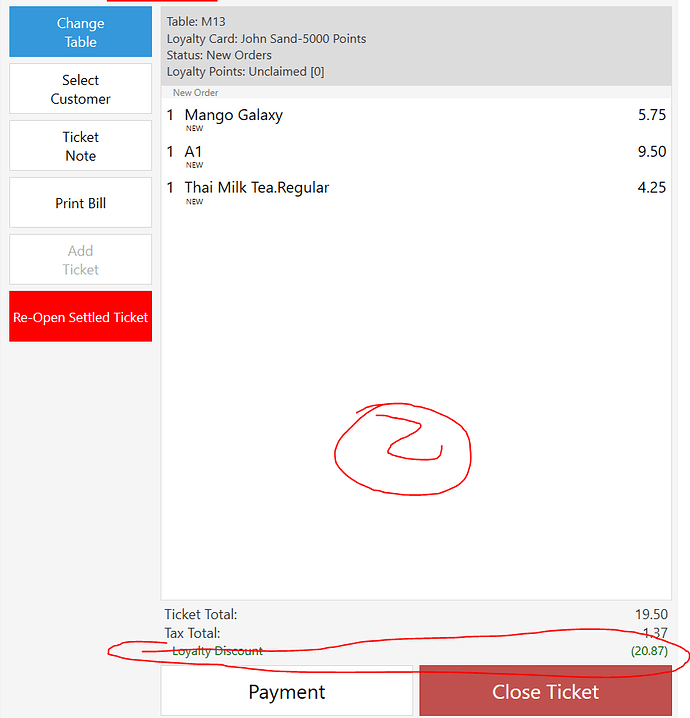 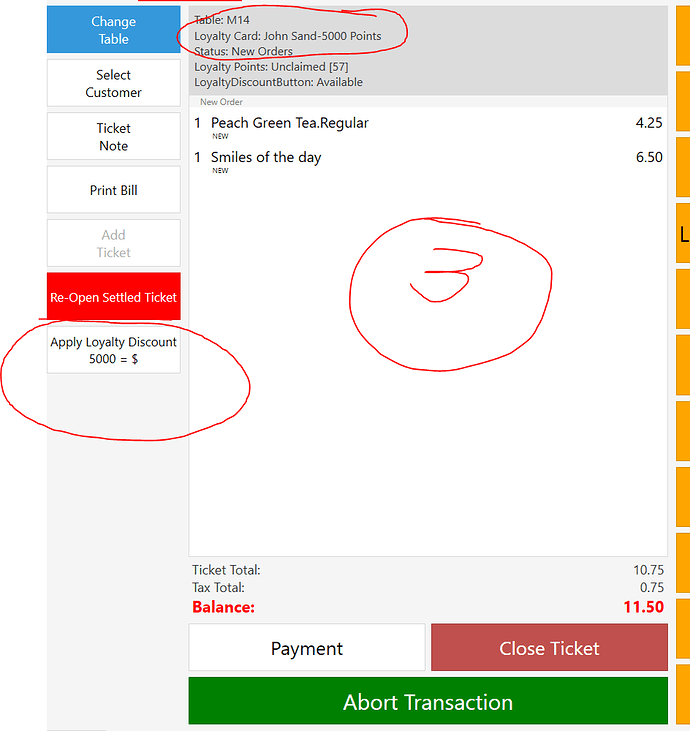 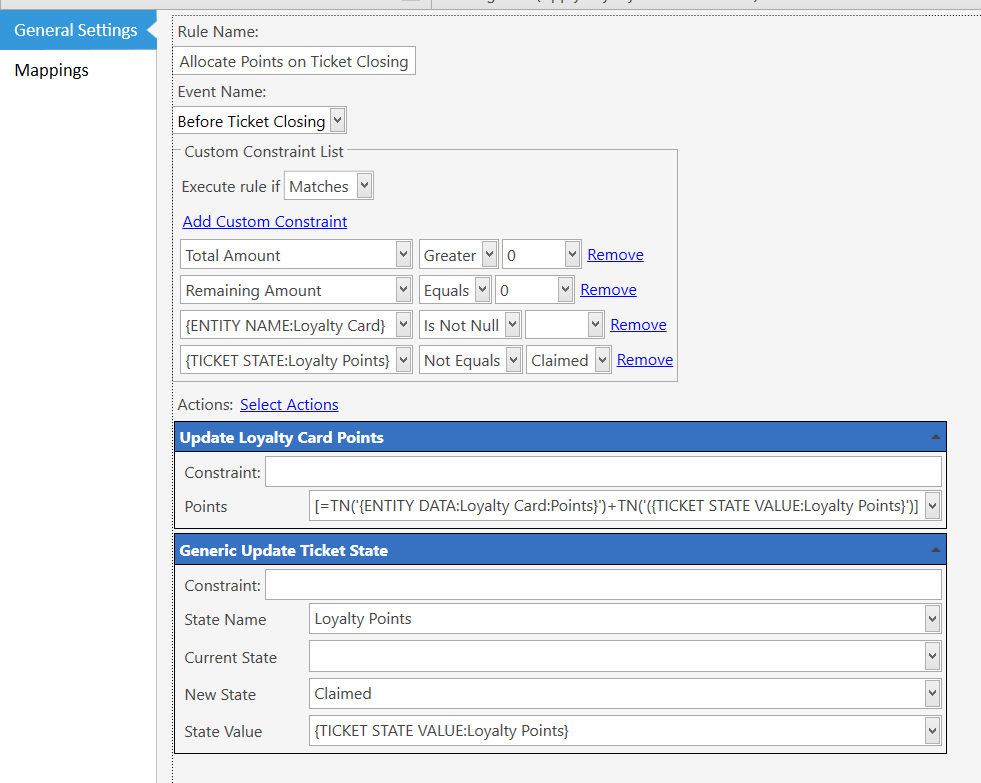 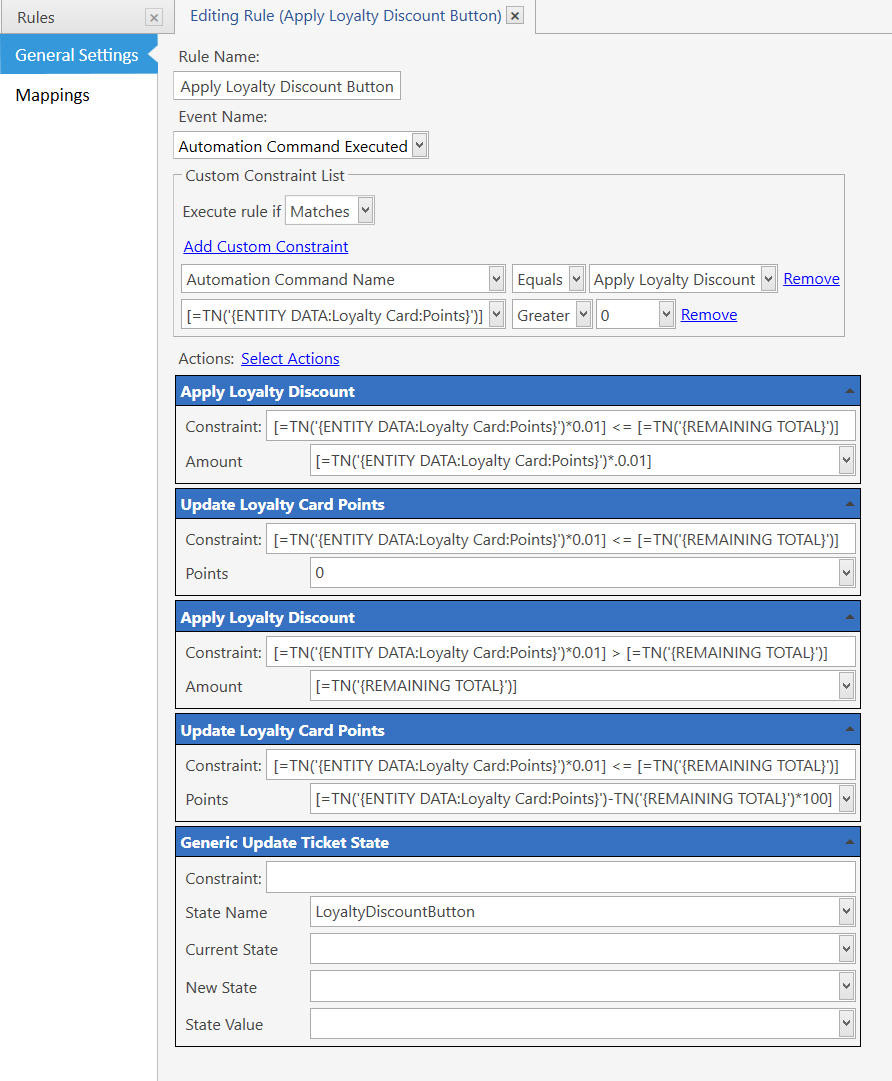 Can see two mistakes at least.
Your update points on ticket closing has unbalanced brackets on the state part of the sum. 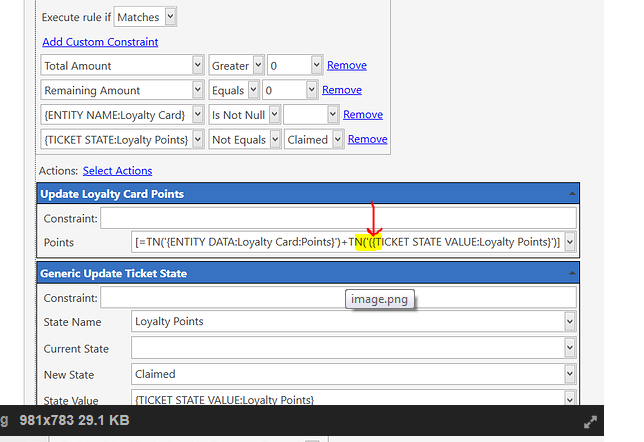 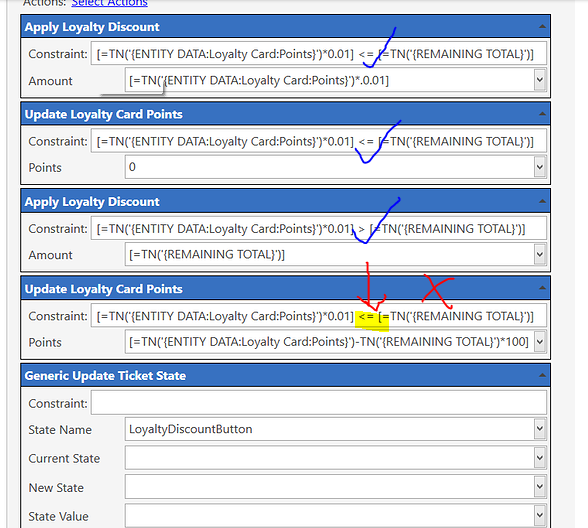 thank you very much Joe.

it works great, thank you for all your hard work and supports. 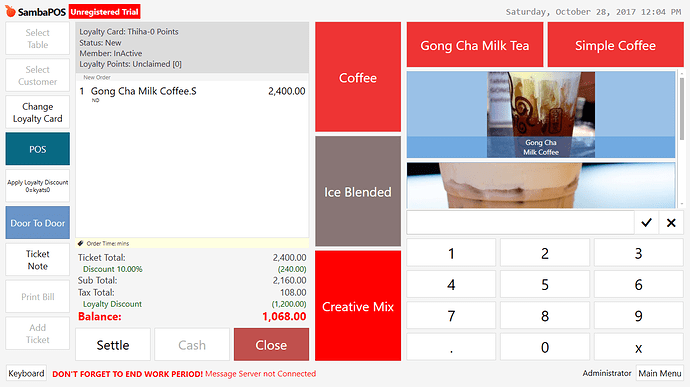 Sorry, your English is quite unclear…
To change the point allocation and use value you just change the formula/sums that add and deduct the count in the entity data field.