Continuing the discussion from Happy Hour prices with portions:

So @QMcKay I thought I would save you some time since you are hard at work in your Inventory Import Module.

I have dropped a GIF below that shows the following:

The GIF demonstrates swapping in and out of VIP (Customer) to simple Happy Hour as per your tutorial BUT also maintains Portion Pricing. It further demonstrations all this happening with 7 Price Definitions which is crucial if you wish to maintain Portion Discounts.

@emre kindly linked me this tutorial which I used to implement the 7 Price Levels Automation Command button shown in RED.

In this tutorial I’ll show you how to automate updating order prices conditionally. We’ll have 3 prices. Breakfast price, Dinner price and ToGo price. Breakfast or Dinner price will apply automatically depending on time of the day. Regardless time of the day ToGo price will activate when ticket marked as ToGo. ##Configuring Prices First we’ll define price definitions from Management > Products > Price Definitions screen. [image] Breakfast price will appear as BB on ticket and bills. I’ll cre…

Once I implemented this Tutorial it was just a question of how to maintain VIP or HH with Portions and then throw Price Definitions at it! The process was just a little hard to think out but only required 1 key RULE using the following Key Action:

[EDIT]
I probably will not use a Toggle for 7 Price Levels but actually assign 2-3 to Customers and use this Price Definition on Customer Selection. A Few others will be accessible from Automation Buttons in the Supervisor Menu.

@markjw you will need to use the PORDER PORTION CHANGED Event to manage your Discount Pricing on Portions. In simple terms it is really just calling the UPDATE ORDER PRICES Action.

So in summary I can have a $ based Discount on Portions BUT ALSO a % based discount on the Product Name that will cover all portions. Some Venues may just wish to save entering Portion Pricing Levels and Discount for every single Item Portion.

PICS coming:
Ok these 2 Rules does all the work! No new States, just using a Order Tag as per Emre’s Tutorial. 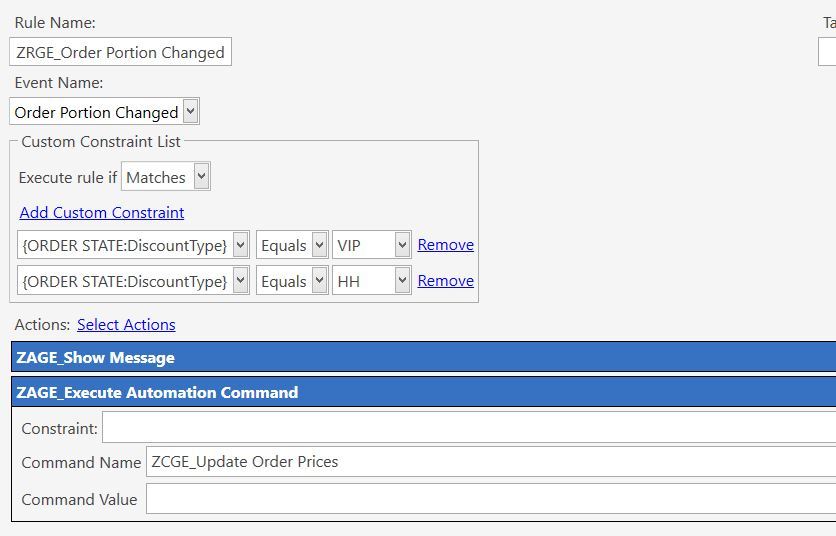 Update Order Price
This is where the Intellect is - you will save hours trying to discover this Rule. Why share BECAUSE blokes like JTRTech
have saved me hours (Cash Back) 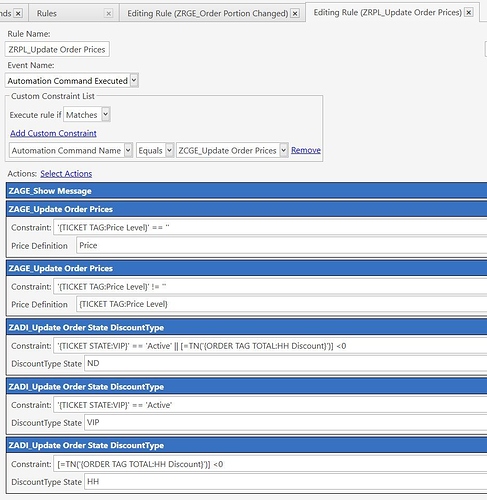 I think I’ve done something wrong…

Im guessing i have written something incorrectly within the constraints. But I’m working from that pic and via remote PC to get the till to work.

Let me get this right…

If i select the adult portion when a VIP has been selected, this should reduce the price? At present that isnt whats happening.

When I’m there in a couple of days i’ll detail what I have put as the constraints as a reply, as I’m sure thats where I’ve gone wrong.

Remember to check for case sensitive matching and spelling errors.

Ok so here goes on how I’m set up.

I don’t use HH, so these constraints haven’t been added

First off, I added Price Definitions: 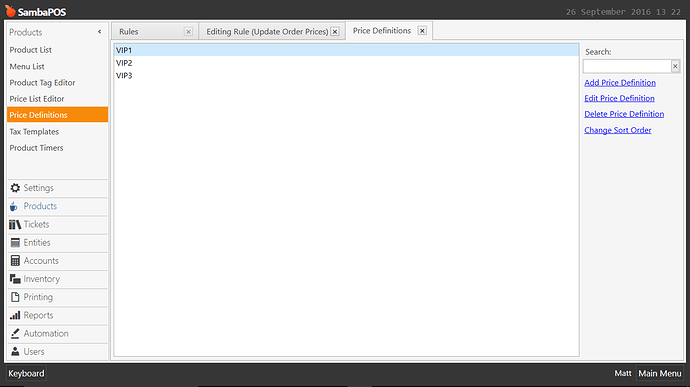 Then I Changed 1 price (to test) on the price list editor: 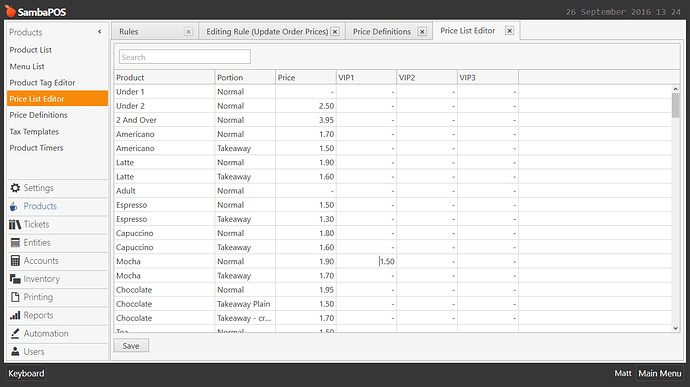 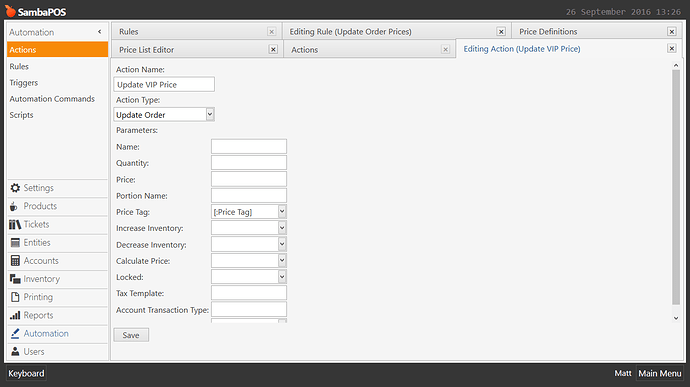 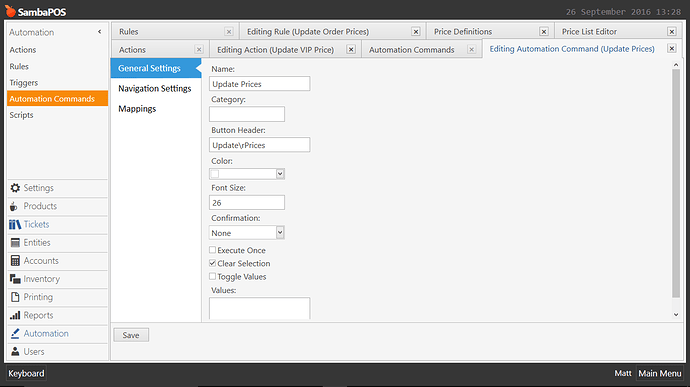 Then Started with the Rules: 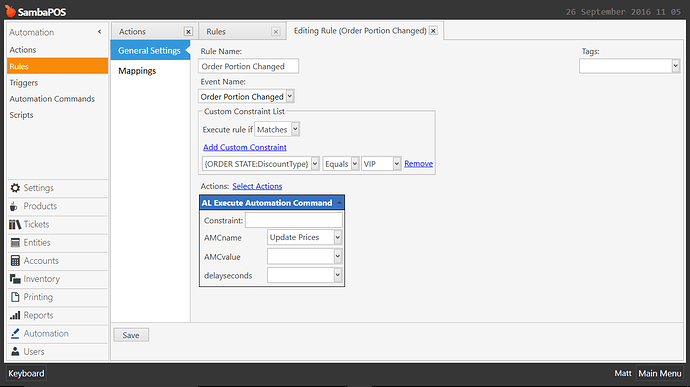 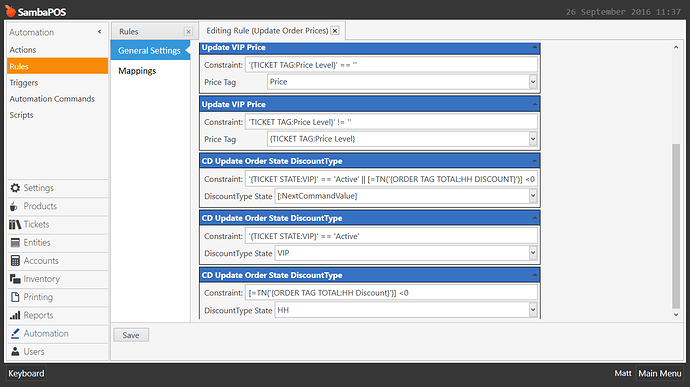 But still not working?

I’ve copied the above images, but with no actual text, I’m wondering if there is a space, comma, bracket or something wrong? as its hard to see with the image being relatively small…

If you never change the Portion, then nothing will happen. You might need to use a different Event like Order Added and/or Ticket State Updated to trigger your actions.

Not sure if its relevant but think it might be connected but if you are having issues with update order and portions do [:Portion] on the action and then {PORTION} in the rule along with the price tag/etc.
I have found sometimes updating order clears the portion back to normal hence the {PORTION} tag to keep the existing portion.

My entity based price list/tag is fairly simple…
Entity selected rule selects all orders and sets price tag to {ENTITY DATA:Price List}.
On order added I have another rule with does similar for new orders added.
Very basic but does the job.

If I log out then back in, that let the VIP work, but not the portion… so its triggering that… However, the discount for the price list editor isn’t working…

Thanks for your time though, I have plenty of time to fine tune things now

No, update the orders with the price tag and found I needed to add {PORTION} so that it kept the existing portion rather than clearing as blank field here seemed to overwrite back to normal, sure it was discussed and not sure if fixed or not, that was in .60

Ok, did that and tested… fail.

When you have spare 5 mins, is there any chance you could double check my constraints? Like I said earlier, trying to copy from a small pic might mean I haven’t got it perfectly right?

I cant comment on the states stuff as dont have any of that on mine but using the portion tag solved the changing price tag on a very simple setup.
Might not be the issue, looking back at the system I dont have it on v5, may have already been sorted… probably erelivent…

maybe @pauln will be able to help me accomplish the end result I need?

Just claify what is the issue?

The prices are not being changed at all, it doesn’t seem to draw the price from the price definitions

That’s what my brain was thinking, I’m not sure… As I’m still not apt with constraints, I just presumed they would work it? (the ones that in the OP above)

Me personally, I cant see HOW me having VIP Level set as “1” is going to trigger the VIP1 price definitions, which basically… is all I want.