Terminal prints old number on receipt instead of a higher number

I have a server computer with sql 2017 installed as per guide on here and two terminals that I have connected via the local settings to the database (server computer).

So when we run sales on server or any of the 2 terminals the receipts comes out with the following.

When this 137 appears it prints the correct order but not the number.

Guessing this is a custom daily order number or something rather than the actual ticket number?

Can you share with us how the counter is setup? What is generating the number? What actions/rules are used to set/get with the number?

I’m using the increase function as per tutorial that I found on this forum.
Here is the rule: 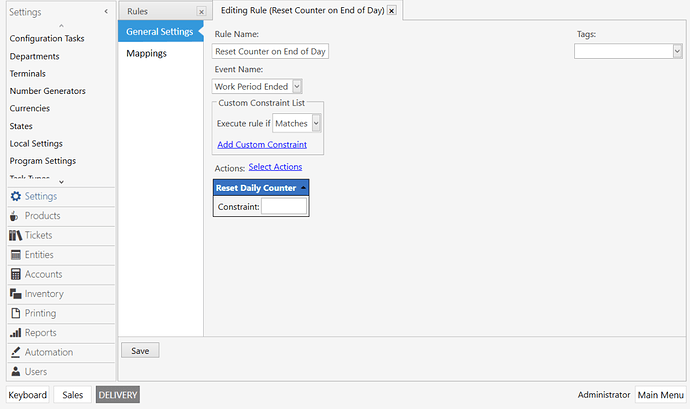 Here is the action: 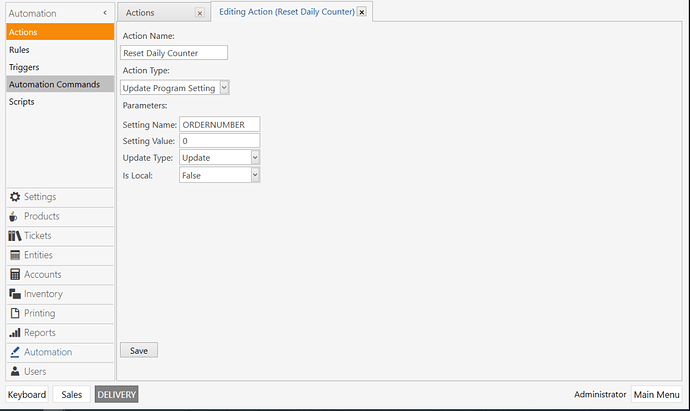 Here is the increase daily counter: 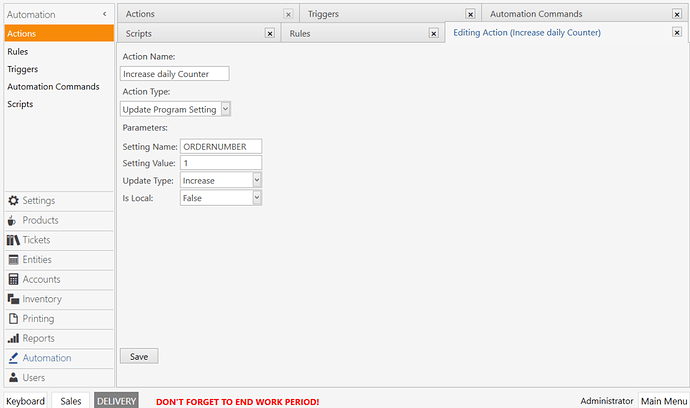 Sorry I am getting confused are you saying that I should skip the reset daily counter and call the update program setting. Would you be so kind to show a mini tutorial.

Over and above that what do you guys use to make those GIF tutorials like Shivan has used on this link :

Alright, If you did the delivery installation the default way, then in your rules you should have a rule which updates ticket entity. Open that rule and add Print job action(You may need to create this if you want a specific print template), similar to the screenshot below [image] Now, when a driver is selected, it should update the entity and execute a print job. [mGAnrmsgLh]

Think that might be the issue.
The solution recomended elsewhere is for you increase action make a new update setting action,
Setting name ORDERNUMBER
Value [=TN('{SETTING:ORDER NUMBER}')+1]
Type ‘Update’
Then rather than using increase your just updating using existing {SETTING:ORDERNUMBER} + 1

Over and above that what do you guys use to make those GIF tutorials like Shivan has used on this link :

I use sharex for mine.

Same. I use sharex as well. Works really well

Just wanted to clarify is it a must to create the new action or should I just overwrite the previous increase daily counter. (Or delete it and create a new one)

I hope I understood you correctly and this is what I have done: 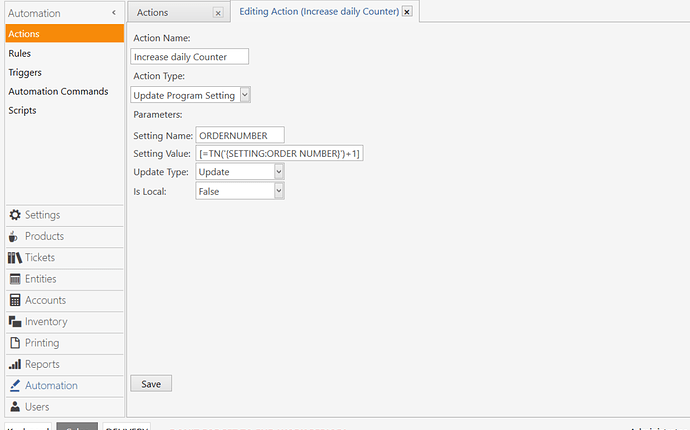 Jesse and Shivan thanks a million for sharing

said new because action already in use won’t update properly.
Actions work more like templates and are saved into the rule.
You can edit but would need to remove action from rule, save rule, then add it again to refresh the action template.

Sorry I tried to create this many ways but I’m not getting it right will you please show how you are able to achieve this with Sharex.

I am also looking at this tutorial which seems to be saying a similar thing like you have said but I cannot get the same result.

Ticket number won’t duplicate, ensure correct terminology else will be confusing for everyone.

Your custom ticket tag is repeating. Let’s refer to it as ticket counter.

This is is shown on knolage base, why would I create a new tutorial showing the exact same thing thats already there?
Show your actions and rules… and someone will likly point out your mistake.

As I said before if you edit an action you need to remove from rule, save and readd it for update to apply

Thanks, for some reason was not getting it right but will work on it until I get it right.

Here are my actions: 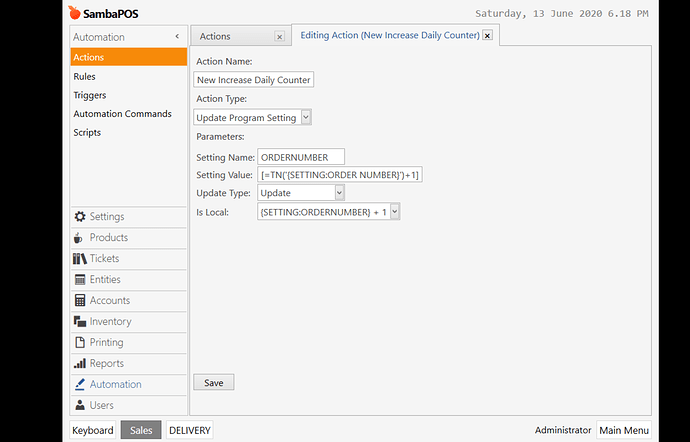 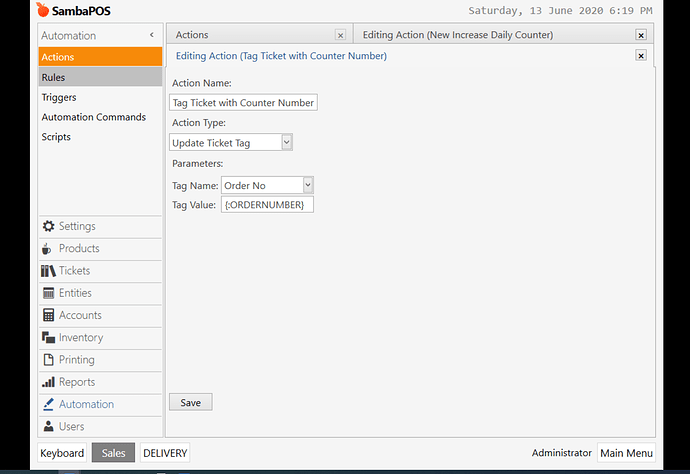 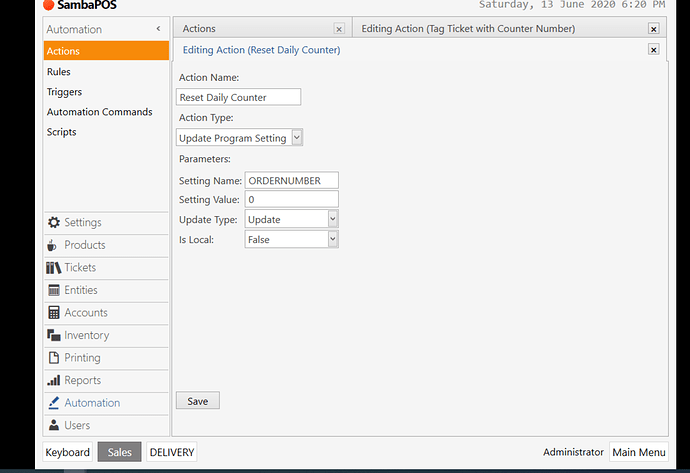 Here are my Rules: 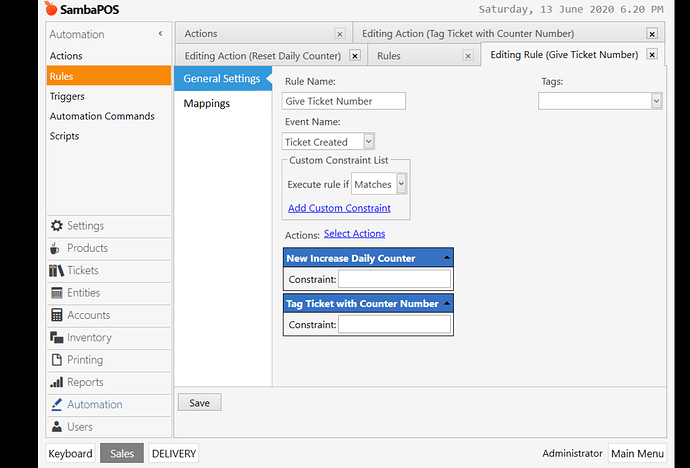 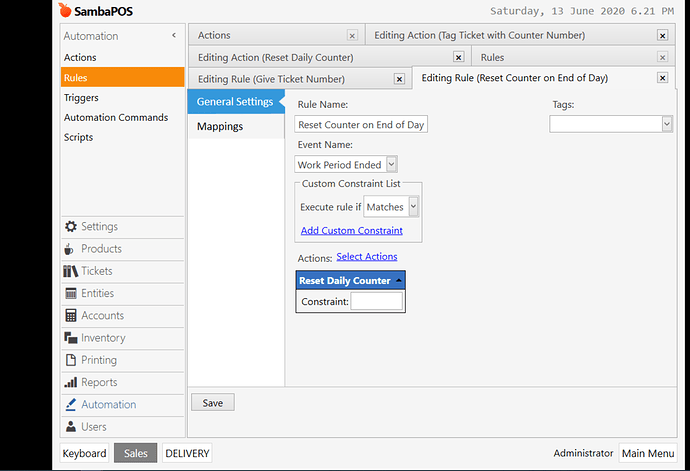 I’m suspecting that there is a delay as the terminal takes about 1minute to refresh on the terminal whilst all deliveries cash was already taken on this screen (from the server). 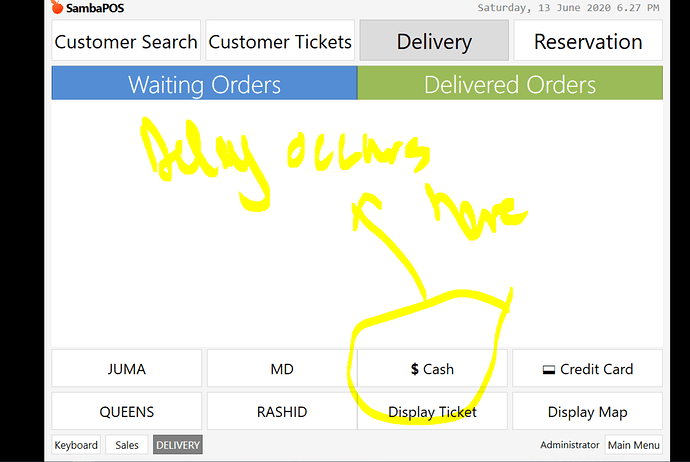 Does anyone know how I can define Terminal refresh intervals (Server polling or connecting) and SambaPOS.

You is local is wrong…
Has base calculation, is local should be true or false.
In your case false.

Also personally I would set tag with current number then update but shouldn’t matter.
Does kb tutorial say to do {:ORDERNNUMBER} in action like that?

Your obviously new to samba and mistakes happen. I would sugest you maybe watch a few of my beginner automation tutorials as talk through it to help you understand how the automation system works and how fields etc are used.

Basic Automation Tutorial Video for Simple Fast Cash Buttons Ideal Practice Flow for Newbies [HD with Voiceover] [image] So I’ve been promising sorting some tutorial videos and have finally found a bit of time to sort one… Although should probably finished the ‘Intro to SambaPOS’ on first. I thought I would start with something nice and simple for a good starting point for newbies trying to understand SambaPOS automation configeration. While fast cash buttons isn’t particularly exciting it…

Thanks for pointing that out I had it set to false as well. I watched your tutorial and it is very good. So I will now create a virtual environment to play around with this settings as the environment above is a live environment.

before that I was wondering where the box below the constraint comes from but your tutorials has showed me.

Type ‘Update’
Then rather than using increase your just updating using existing {SETTING:ORDERNUMBER} + 1
needs to click in my head.

So I get that it works on dependency workflow where actions and rules are related and when one is changed it needs to be updated. Will play with this some more on vmware as I am hoping to sign up as a reseller asap. I had no trouble setting up the daily reset which I found on the forum. It just the last step that is needed so that my client can work smoothly.

No, square brackets with = is a formular type
Square bracket with colon is a way to carry the field to the rule.
Generally you should use that method of you want to use a dynamic value with the expression in the rule rather than the action.
Static values are fine in action but you can obviously carry the field to rule and set any value in rule.

Just a note, when you label the carried field try and always use at least two words with a space. As it is posible to inadvertently trigger rule slecific square bracket values. Took ages to work that one out when discovered it.

Using carried fields is also good for dev and learning as you can just change expressions in rule, if you do in action as said before you have to remove and re add the action to updare it.