I cannot figure out if this is possible or not. I have two Ticket Types that I use “To Go” and “Eat In”. When you select the Customer Entity it asks which Ticket Type then creates the ticket depending on the choice you choose. Reason for this is I have order tags that I only want applied on “To Go” Ticket Types not "Eat In: Ticket Types. Basically if it is a “To Go” ticket type when selecting a drink it will add an order tag for the correct size lid and it tracks the inventory of the lid. If it is an “Eat In” Ticket Type it will not put the Lid size order tag and it wont deduct inventory of lid. We do not give lids with Eat In orders.

My issue is I am setting up a Kitchen Display and everything is working fine except you cannot print the Ticket Type on the order. My Kitchen needs to see if it is To Go or Eat In. So I simply was going to put Ticket Tags and have it display the ticket tag at top of the order. Problem is I don’t want my employees having to select To Go or Eat In Twice once for the Customer Entity at select screen and then again for the ticket tag. I would like to know if its possible to have it auto Tag The ticket when a specific Ticket Type is created. Or simply if a print command can be made so it will display Ticket Type on the kitchen screen.

Create a Rule that is executed on the event of Ticket Created, and add the above Action to the Rule and select [:TicketTypeName] for the Action Value. 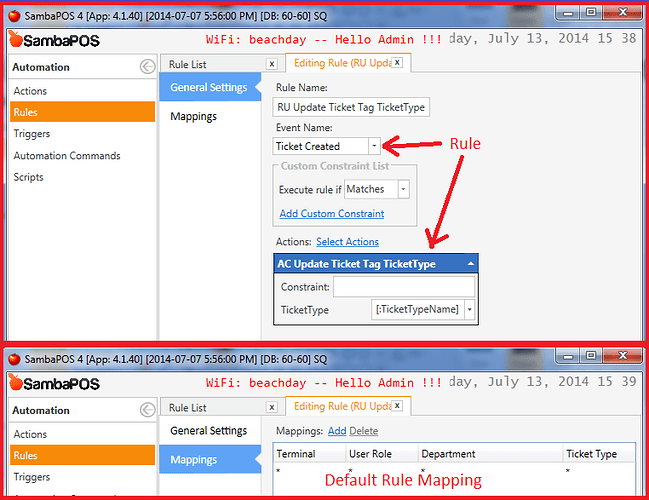 The TicketType Ticket Tag will show on the screen… 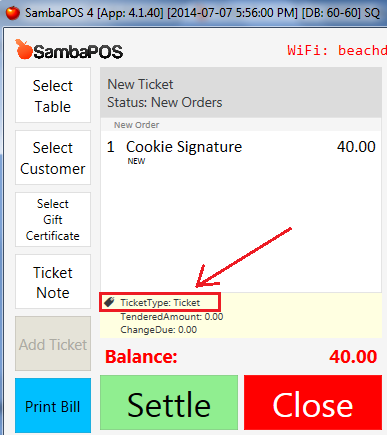 Add the following to the Printer Template: {TICKET TAG:TicketType}
The TicketType will print on the Ticket wherever you’ve placed it in the Template, and/or use it in the Properties of a Ticket Lister Widget, such as this… 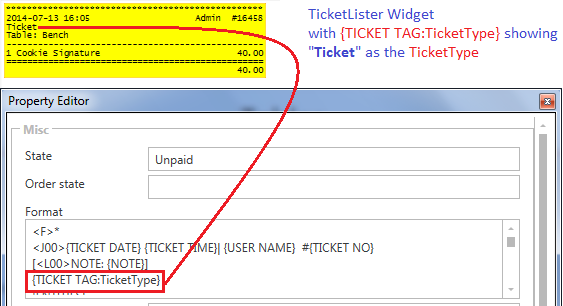 Works like a charm. Thank you very much. Now the only issue I am working on for my system before I can take it live is the Kitchen Display. Like described earlier I have two Ticket Types “To Go” and “Eat In” and I explained why in previous post so my issue now is I have been successful at making a Kitchen Display that shows Unpaid tickets and then you press an Order Ready Button to clear it out. It works great for all unpaid tickets but most of our Eat In customers will be paying immediately. These tickets do not get transferred to the Kitchen Display. I need the tickets that are Paid to show up on Kitchen Display and still be able to hit the Order Ready button to clear the Display.

Also it may be my ignorance but for some reason even if I change the font of the ticket readout on custom view for my Kitchen Display the font will not change it stays the same size.

Well seems I have figured this one out as well. Good community lots of info to dig into.

I have been trying to get this to work with a Split guest Rule… Basically I have my system setup to tag orders with the seat number. I have a automation button setup to split or move the orders to different tickets… I would then like to have it automatically tag the ticket based on the ordertag… only problem is that im not sure how… i have tried everything i can think of but i just cannot get it to work… this is part of what i have been following… maybe someone can take a look and see what i may be need to do next… New To Samba (Table Questions)

@kendash, how did you solve the display conundrum? I would like the same kind of kitchen display: walk-in customers pay first, then we cook; call-in customers we cook first and then they pay at pick-up.
Ticket Lister Widget with State=Paid and Order state=Kitchen shows the pre-paid tickets, but not call-in. State=Unpaid shows call-in but not pre-paid.
Did you just use two Ticket Lister Widgets for the kitchen display?

You can define more than one state by separating them with a comma like so: Paid,Unpaid or Kitchen,Submitted

Exactly what I needed. Thank you.

Remember if you list paid tickets you wont be able to clear them out unless you add reopen closed ticket action to the mark ready rule.

Edit: WoW I was a newbie in this thread lol. You really dug deep to find this one haha.