I just bough a serial caller ID modem from callerid.com company (best brand there is for these devices here in the US).
I got it all setup and showing the phone number on putty and set it up on samba by installing the caller ID module from the samba market and setting up the device under local settings devices.

When a call is received I dont get any popup on samba.

Im pretty certain that its my setup on samba can someone please show me how I should configure my settings? 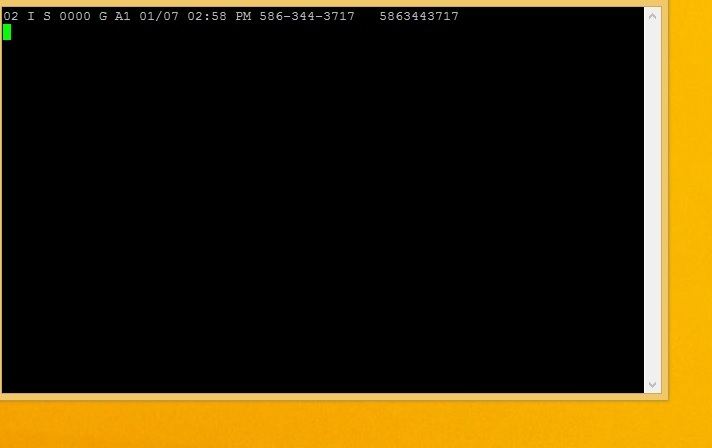 Yeah that’s how I set up mine. But also he’s using a different modem.

Also that tutorial doesn’t really say much about the samba settings. Anyome that can look at my serial string and give me an idea on what settings to input would be awesome. @emre Do you have any ideas about this?

Anyone know how I can fix this. I have tried everything in the forum and still cannot get the caller id to pop up.

When I leave putty listening to my com port and launch samba the pop up shows that the com port cannot be opened so I know for sure that the pop up is working.

When I launch samba with putty closed no error pop up comes up meaning that it is listening to the port just fine. So It needs to be something with my samba settings.

I tried to insert the match pattern : .{32}([^\s]+) but still nothing
I did put it Customers into the entity type name and yes that is my entity name.

Can you show screenshot of your Samba Settings for it? 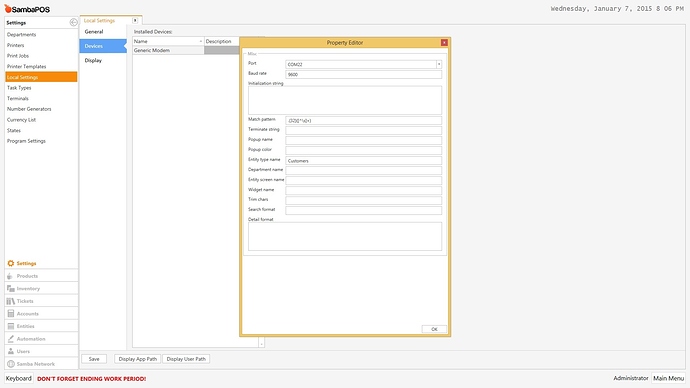 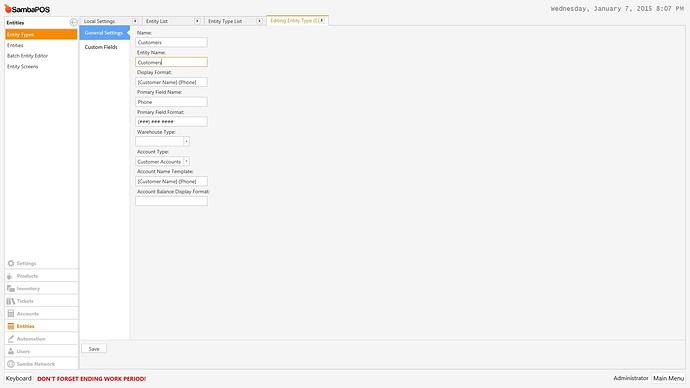 Default Entity Name for Entity Type Customers is Customer. Yours is set to Customers. This is unrelated but just thought you might want to know that. Did you try setting a name for the popup and a color? Maybe set your search format too?

could you please give me some idea on what to put in there. For name I can name it whatever I want right? and for the color I can just put Green?

Yes. I have not used Caller-ID so I am not experienced with it just so you know I am going by logic of my background with Samba and how it generally works. So some of what I’m asking you to do is to work through it with you and maybe we can find a solution.

Yeah I appreciate that.

Since I showed you my putty string cant you see how my format is? Honestly I would think its very similar to other devices. Since its showing the phone number on samba I would think everything left to setup now is samba.

Caller Id is used by all popular POS systems here in US so they are definetaly the most reliable. I am hoping @emre can help us set this up so more people can buy these here in the US.

If you enter the wrong Caller ID Device on purpose and start SambaPOS do you get the CallerID error popup?

You mean something else instead of generic device?
@kendash
When I launch putty before samba (so com port is not accessible by samba) it shows the popup saying error com port…

You configured the Com Port yes but that still does not mean its configured to work with it it just knows its listening to it. Did you try Advanced Generic Modem?

BTW if the error popup displayed then Samba is working correctly and the popups are working correctly it more than likely is the device setup in local settings thats wrong. Or that specific modem is not compatible.

and yes I have confirmed with multiple ways that the popup works and I dont think it is samba.

It has to be something my settings. Maybe my match pattern.

Do you know how samba caller id module works? I am certain that samba is getting the serial string through the com port however its not using it properly.

It is probably your match pattern. I am trying to understand the logic of them and if I get it I will post some possibilities to try. But I am pretty sure : .{32}([^\s]+) is wrong.

Yeah same here I just have no idea of the logic. ;/

Appreciate your time and help. If you ever need help with camera integration id be happy to help you out in return. @kendash

I am pretty knowledgable with that aspect as well. Although most of my experience is with March systems and Verint.

Yeah I have the best solution out there. I tried geovision but it is simply too hard and annoying to opperate. My solution uses milestone which is super easy to install. @kendash

Also I have dealer access to license the software

We need to look at your Putty string and derive a Match based on its structure. I just need to figure out how the Match is written logically.

I was hoping @emre would lend us a hand in that he seems to know based on his previous posts.