Had a call from client who said he started up a bar tab today and it kept popping up every time he used the tills. So he had to cash it off and manually tab up for the customer.

So I decided to think about this myself rather than ask, but upon changing things I got behaviour which was wrong.

@GreatShakesBar Here is my bar tab setup, the flow Add Orders and press Open Bar Tab button [image] Enter customers name, ticket tag updates with customers name AND add Bar Tab Limit if £50.00 (you can change this in the limit rule to whatever you want as default limit) [image] [image] You will also notice three new buttons appear, Tab Name, Tab Limit and Close. For now just click close and the bar tab will close and receipt prints to give customer. The receipt has a barcode so …

Having followed the tutorials on switching users (not entities), the system needed a couple of tutorials to follow to get working. This isn’t a tutorial but is a database file of a complete set up of the 2 tutorials listed below: https://forum.sambapos.com/t/switch-between-users/1307 and https://forum.sambapos.com/t/ricks-tutorial-7-auto-assigning-cashier-as-ticket-entity-needed-for-switch-user-function/3922 This database file will create an entity called “Staff”, you will need to create a …

The Switch user uses [:UserName] and bartab function closes it with the username too. So when a bartab is created and closed… all is good until you go to open a new ticket.

What I tried to do was add an action to the BarTabs to create an entity state of ‘BarTab’ when its set as a bar tab and for the Switch User to only bring up the order if ‘{ENTITY NAME:BarTab} is NULL’ but this doesn’t seem to work?

Can anyone spot where this wouldn’t work?

Shouldnt it be on the open hold ticket rule? as it should only trigger to the stored order if its NOT a bar tab.

heres a screen shot of what ive added, but its not playing ball. 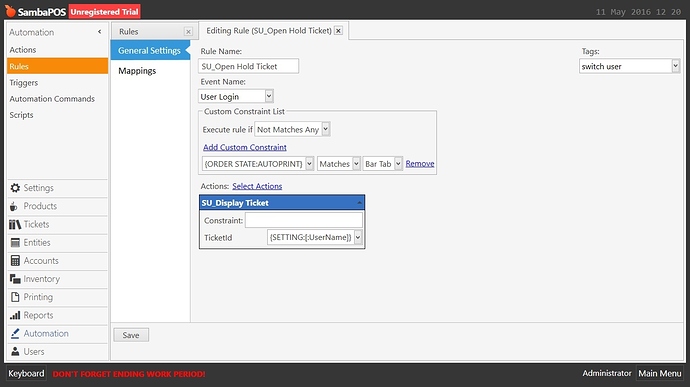 EDIT: I changed the Constraints so ‘{TICKET STATE:AUTOPRINT}’ but it still logs into the bar tab instead of a new ticket.

Woop, again I excel myself

I just added to all rules in the Switch User Rules…

Thats how i did mine

sorry if i wasnt so clear before

Sorry to bump, but between this and the other question I had ive integrated the two and they don’t like eachother…

Can you see any problem here? 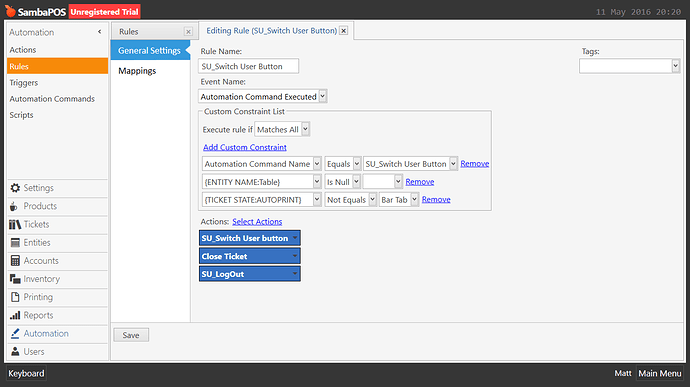 Edit, ive used all of these for the Rules… just showing an example

You cannot close a Ticket if it does not have an Entity Assignment, unless it has a Ticket Tag.

Just to add, I’m assigning it to a table.

Scenario is, if I assign a ticket to a table then use switch user then itll log me back in showing the table I had just created.

I am assigning it to a ticket.

Ill check that rule you just said though… that may work

Ok I did that and then set it to only show if {TICKET TAG:Switch} is NULL

but its put me in a loop.

I don’t get it… surely if I didn’t want the table to show on switch, my original constraint should work?

Try using your entity table constraint but instead of being is. NULL You could use not matches and then add your table numbers separated by a pipe, for example

Bit of a ball ache listing all your tables but see if that works, if it does theres probably a way to do it without listing them all

Or could you use { ENTITY } not equals or matches Table instead of using entity name?

I am also confused as to why you have an Action named SU_Switch User button in your Rule. What does it do? Is it calling the same Automation Command Name that the Rule is for? If so, you could case an infinite loop if your Rule Constraints are not carefully planned and met.

Tried it with just Table 1 and it still logs into the user and shows the table.

Tried with ENTITY not matches/equals and it does the same.

Rule is firing because it works with the bar tab constraint within the rule I have running works perfectly. The SU_Switch User Action is a log out action, I have changed the name to reflect this and avoid confusion.

Its only a small village pub, If I cant get this working then ill just scrap the Tables and use Bar Tab only. If they never had it they never knew it existed right?

I say that yet the bar tab isn’t working now…

I wonder if ive broken something in the process, might delete everything and start again.

EDIT: yes it does I just needed to close and reopen samba

Right, ok so the Rule is firing. Still put a show message action in there as I suggested to ensure you are reading the entity properly.

That was the point of my post - to see what is available to use as a Constraint, but you must remove the Entity Constraint first.

The Show Message Action is your #1 troubleshooting tool

The Rule Debugger is your #2 troubleshooting tool.

ok will do now be right back!

Changed the constraints I was using to {ENTITY NAME:Tables} Not Matches 1 and its worked…

let me see if is null works…

So first of all, either the plural or non-plural version both work, which is expected. But it has been mentioned previously to prefer the plural version since it is theoretically faster. Use {ENTITY NAME:Tables} whenever possible.

Since your Table Names are in your case simply numeric, you could use this:

You could also use, as @RickH mentioned, this:

I still don’t understand this. Your Rule has 3 Actions:

Maybe post a revised screenshot with your actions expanded. Also post screenshots of all the individual Action definitions being used in the Rule.

I still don’t understand this. Your Rule has 3 Actions

It was a mistake on my side, I had confused myself by not adding log out to the action so created a second rule.

1 of them has now been removed.