So I thought I would share a simple little setup I did for a couple of the local bars I do tills for to help avoid using Customer Entities for short term temporary bar tabs.
This saves having a cluttered customer entity list full of names which will not be used again.
Using the ticket tag it allows the ticket to be closed without an entity and the display ticket list allows you to view and recall the open ‘Temp Tabs’.
I also upgraded the setup for my original quick onsite solution to also include an ‘open’ Temp Tab count on the automation command button. 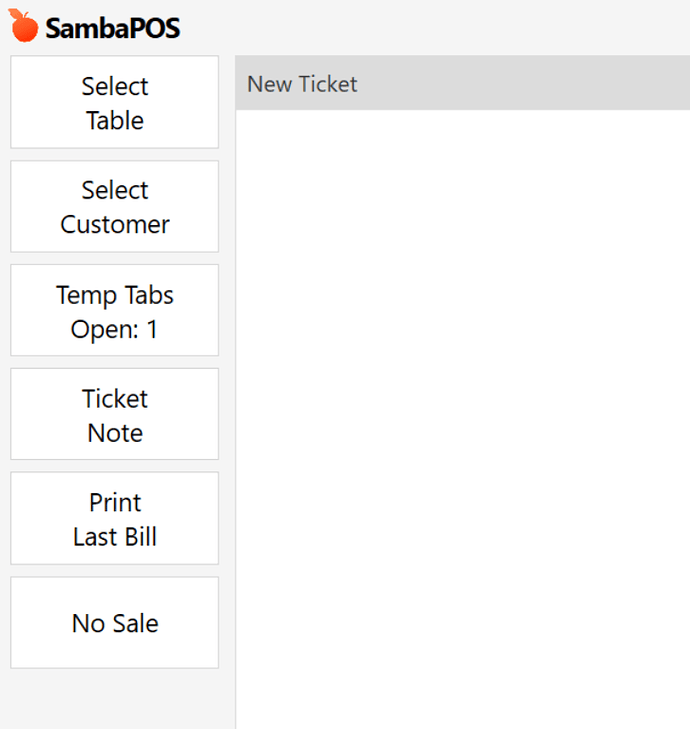 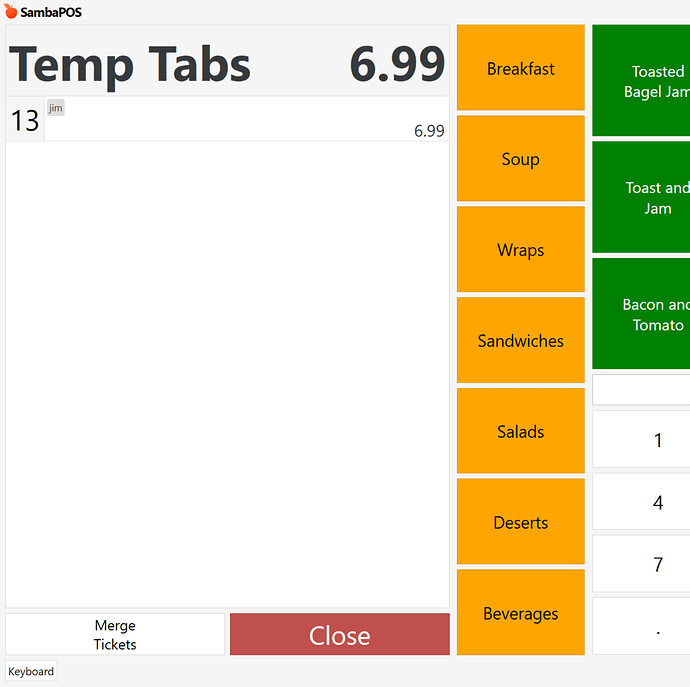 Did you find this video useful?

To gauge the value of and demand for a possible new video tutorial section please mark if you found the video useful and would like to see more. [poll name=poll] - Yes - No [/poll]
5 Likes
V5 - Bar Tab Setup
Flaw in Temp Tabs setup
Name on (kitchen) Ticket
Few Pre-Purchase Questions
Documentation for Version 5
How to create tabs with names without creating customer accounts?
Takeaway without customers
Customer Loyalty Points Setup [4K with Voiceover]
Help me debug an error following the Temp Tabs Tutorial, please
How to edit table names when getting an order
Layaway/Switch User with Login Prompt and Ticket List Tutorial [4K with Voiceover]
Custom Command Button "New Orders" not returning from Menu
Printing orders before closing the bill?
Changing Table Button Captions
Confused on how to setup a simple to go
How to set upTabs
Force Staff to enter ticket note (NAME) before closing ticket
JTRTech October 25, 2016, 7:23pm #2

What is SambaPOS? Using the Forum History & Versions Is SambaPOS for Me? This was a video I put together a while back just going through some background information about SambaPOS. Video covers points like; Describing SambaPOS The SambaPOS Forum History, Versions & Requirements Is SambaPOS Right for Me? https://www.youtube.com/watch?v=pGJuRpgSNxk Tutorial Videos Basic Automation Tutorial Video for Simple Fast Cash Buttons https://forum.sambapos.com/t/basic-automation-tutorial-video-for-si…

Tutorial video uploaded, 4k quality I think is still rendering on youtube servers or isnt showing as this pc isnt 4k but 1080 is ready.
Audio defiantly allot better with the new microphone

This is another on the fly voice-over, speeds the process up allot recording audio as going through.
Didn’t do the zoom ins as suggested as would have taken a long time and my final cut skills are still fairly basic.
Also didn’t cut out mistakes etc as think it helps users see how to problem solve.
Let me know your thoughts or any questions.

Thanks for the video, works perfectly. Is there any way so the current temp tabs are visible only for current user? Thanks

Haven’t tried but might be doable.
Check the ticket list action parameters and see if a second filter can be applied.
I did it this was on purpose so that at end of day if someone has left a tab open it is visible for whoever is cashing up, else they have to try and find it in the main ticket list.

Thanks the video is really helpful. keep up the good work

Great tutorial. I have watched this several times and have followed it to every detail. I got the tag part to work, but the temp tabs screen which shows the open tabs will not fire. i was using the table entities to save my bar tabs. I think this is the problem but cannot figure that part out. Any help? 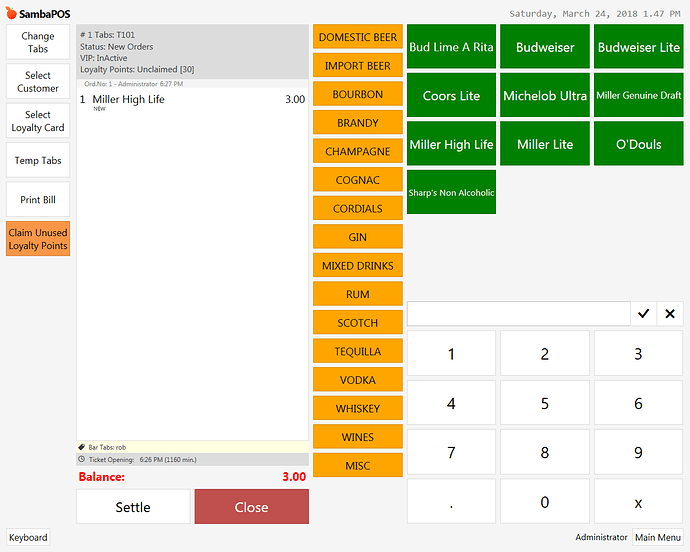 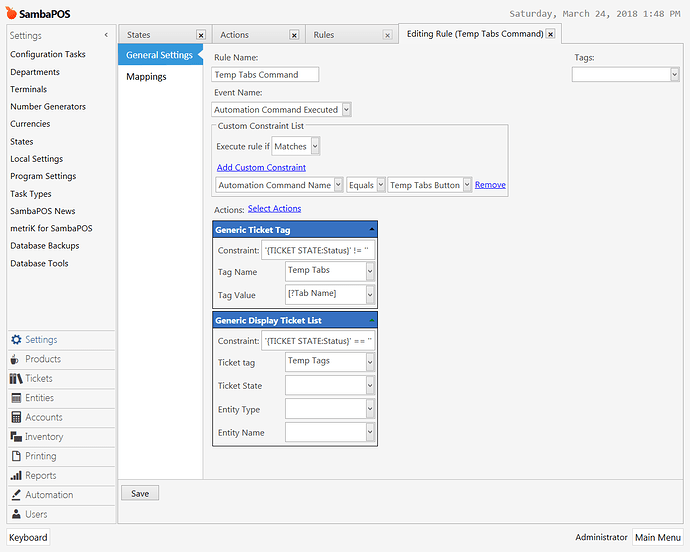 Your trying to get a list for Temp Tags but the ticket tag is Tempt Tabs.

I removed the table entities and create tickets without assigning an entity. It works fine now. Thanks

Arrr, yes, that would be because the selection of an entity creates the ticket meaning that there is always a ticket started for your flow when you can see the button.
The temp tabs isnt really needed if you force table selection as ticket creation method as you would have already selected an entity by that point.
You could work around if preferred by changing the action constraints to something else.

This could be useful for if you have multiple people at a table with separate tickets. I created something similar a while back but am no longer working with that setup but this way seems to be a good way of doing the same thing!

JTRTech, is it possible to assign the bar tab to a loyalty customer entity instead of always entering a customer name? ex.(If I have a loyalty card customer loaded on the ticket screen and they want a tab, I need to figure out how to have temp tabs recognize the entity, bypass the customer name input screen, and then assign the LC entity to the temp tab automatically.) Any help would be appreciated.

But if you assigning an entity you dont need temp tabs. The ticket can be closed on a customer/loyalty card etc entity without the need for temp tab ticket tag.
The temp tag setup is for senarios where you dont want to create an entity for a one off tab.
If they are a returning customer with entity be it loyalty card or customer entity you just need to use that and use the entity screen to see open tabs for those customers.

Ok. Just tested that and you are correct. Thanks

For that type of entity screen your best to have a state filter rather than a fixed grid like you would tables - think thats how customers is by default anyway.
That means it only shows entityes with open tickets rather than all like tables since you would typically/eventually have too many entitys to have a grid layout that was useable.
Typically you would have a state filter enity screen to show open ticket entities and a search screen for selecting entity for new ticket (again how customers is by default I think).

I found this useful and I am using it but I renamed it to Open Tabs instead of Temp Tabs.

Works great however they would like the Name thats enter on the open tab (temp tab) to be displayed in the kitchen ticket. I am unsure what I need to put on the template to capture that name. I may not have something in place for that.

You would just add the ticket tage to the template ie {TICKET TAG:Temp Tab}

Is that all I need to be able to put the Open Tab: NAME on the ticket in the kitchen? 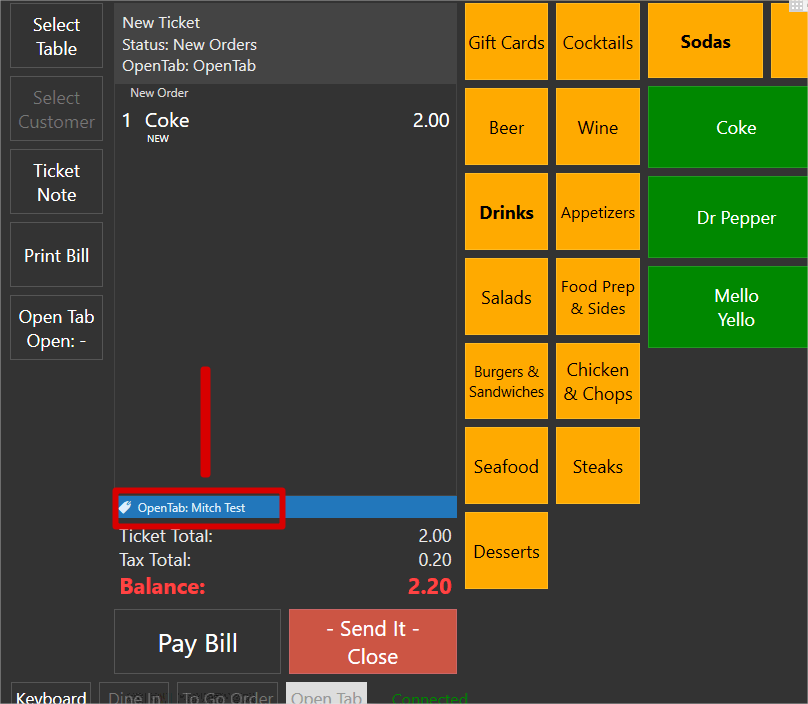 Nevermind, it does indeed workout. 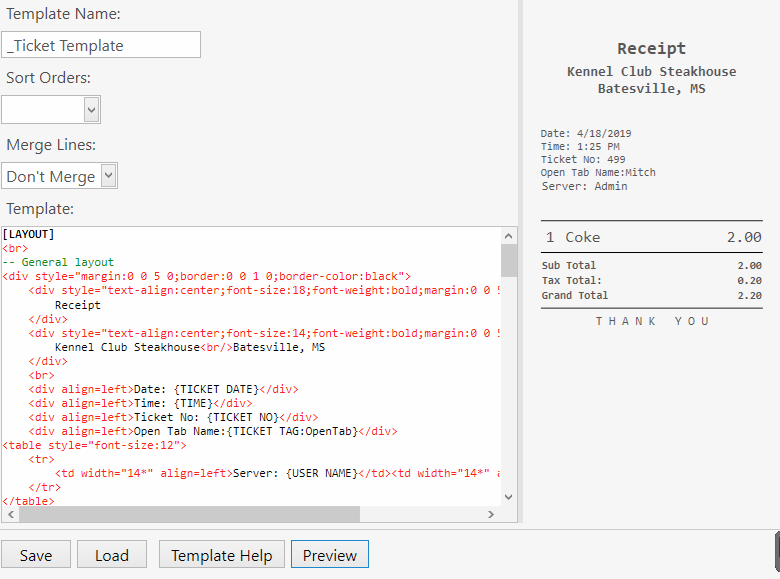